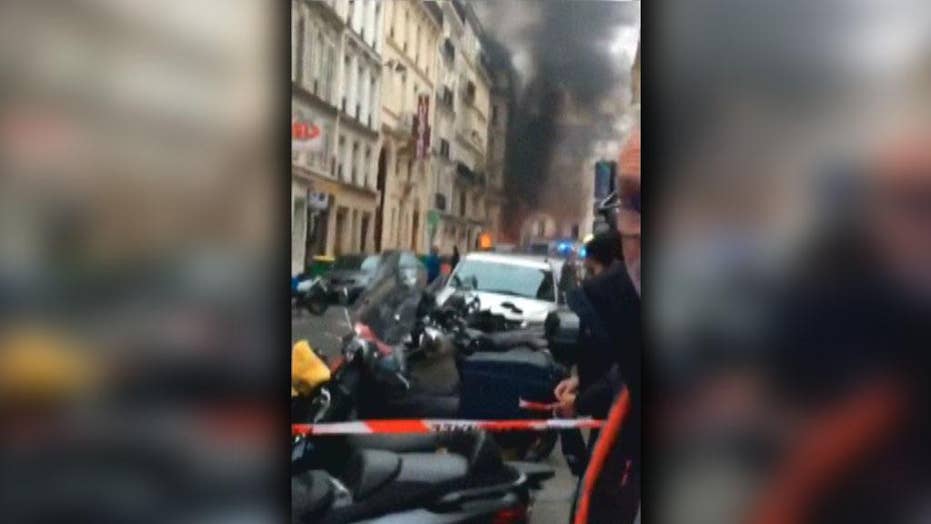 Cell phone footage captures the fire and smoke of what is left of a Paris bakery after a gas leak caused an explosion.

A powerful blast caused by a gas leak at a Paris bakery Saturday killed four people and injured at least 47, sparking an all-out emergency response and evacuation of residents.

The explosion and fire blasted out the windows and even overturned cars, French authorities said. The incident occurred over Rue de Trevise in the upmarket 9th arrondissement of north-central Paris, not far from the shopping district that includes the famed headquarters of Galeries Lafayette.

At least fourpeople were killed by the explosion, including two firefighters, and at least 47 people were also injured, with 10 in critical condition.

The Spanish foreign minister says a Spanish woman is among those killed. Spanish Foreign Minister Josep Borrell tweeted that “I deeply regret the death of three people after the explosion in central Paris, including a Spanish woman.” He offered his condolences to her relatives and “wishes for a quick recovery to the other injured Spaniard.”

It was initially reported that four people died in the incident.

“Unfortunately the human toll is particularly serious,” France’s interior minister Christophe Castaner told the media. He added that “the situation is under control” and described his “shock” after seeing the damage.

Around 200 firefighters and police were involved in the emergency operation. A helicopter landed in the area to evacuate the wounded people.

He noted that firefighters were already at the scene to check on the gas leak at the bakery before the explosion occurred.

The explosion caused debris and broken glass to cover the pavement. Some residents also described the loud blast, saying it scared them, fearing it was a terror attack.

An employee of a hotel opposite the bakery said he saw the firefighters entering the bakery about an hour before the blast.

“In the middle of nothing, I heard one big explosion and then a lot of pressure came at me (and) a lot of black smoke and glass,” the witness said. “And I had just enough time to get down and cover myself and protect my head.”

Firefighters rest in the street after the explosion of a bakery on the corner of the streets Saint-Cecile and Rue de Trevise in central Paris on January 12, 2019. (Geoffroy VAN DER HASSELT/AFP/Getty Images)

He added that the explosion left whistling in his ears. The hotel where he works was “destroyed” in the blast, he said.

The explosion occurred amid heavy police and emergency services presence in Paris due to the Yellow Vests protests, when protesters march on the capital every Saturday to show their dissatisfaction with the government.