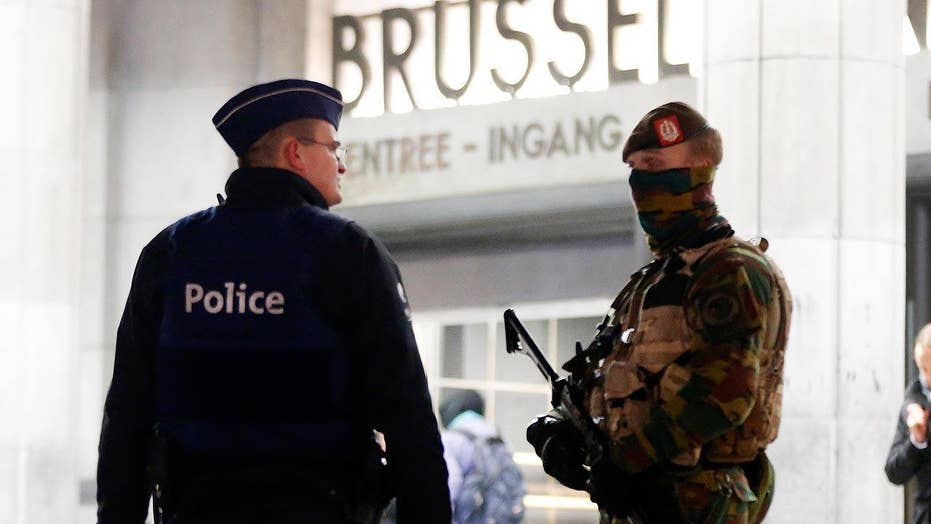 Belgium remains in the grip of terror

Country stays at high alert as troops search for one of the Paris attacks mastermind; Benjamin Hall reports on 'Special Report'

The discovery of a suicide vest in a Paris suburb Monday has heightened the possibility that Europe's most wanted man, Salah Abdeslam, abandoned his murderous mission to cause terror in the French capital before fleeing across the border into Belgium.

The vest was found by a street cleaner in a pile of rubble in Chatillon-Montrouge, on the southern edge of Paris and a considerable distance from the sites of the attacks on the Right Bank of the Seine to the north. However, authorities say data from Abdeslam's cell phone placed him in the Chatillon-Montrouge area on the night of the Nov. 13 attacks, which killed 130 people and injured 350 others.

A police official told the Associated Press that the vest contained bolts and the same type of explosives — TATP — as those used by the ISIS attackers. A police source also told Sky News the vest had "the same configuration" as those found with the seven confirmed assailants.

In addition, the theory that Abdeslam originally planned to join the seven other terrorists would match the claim by ISIS that eight people carried out the attacks, not the seven confirmed by the French authorities. The terror group's statement of responsibility also said that simultaneous attacks were carried out in the 10th, 11th and 18th arrondissements, or districts, of the city. In fact, the assaults on sidewalk cafes and the Bataclan concert hall only took place in the 10th and 11th districts, while no attack in the 18th took place.

What remains unclear to investigators is why Abdeslam apparently ditched his mission before leaving France. One theory, advanced by Abdeslam's brother Mohamed, suggests that the would-be bomber simply had second thoughts about his mission at the last moment. Another theory, held by some authorities, holds that Abdeslam abandoned the vest due to a technical problem.

Abdeslam is suspected of playing at least a logistical role in the coordinated shooting and suicide bombings on the night of Nov. 13. He has not been seen since a few hours after the attacks, when he managed to cross into his native Belgium in a car with two friends, both of whom have since been arrested.

Salah Abdeslam's brother, Brahim, blew himself up near the Bataclan concert hall during the attacks, injuring 15 other people.

As authorities hunted Abdeslam Tuesday, Brussels entered the fourth day of its lockdown, which closed the city's schools and subway system. Belgian Prime Minister Charles Michel said Monday that despite the continued high-alert level, schools would reopen Wednesday, with parts of the subway system beginning to operate. He did not say when the system would be completely online again.

"We are very alert and call for caution," Michel said. "The potential targets remain the same: shopping centers and shopping streets and public transport."

"We want to return to a normal way of life as quickly as possible," he added.

Belgian authorities have not announced any details of their investigation into potential attacks nor have they released information about four suspects who have been arrested and charged with terrorism-related offenses. These include one suspect who was arrested as part of a sweep that saw 21 people detained since Sunday night. Fifteen of those detainees have since been released.

Also Tuesday, the only person in France facing potential terrorism charges linked to the Nov. 13 attacks was brought before a judge to be either charged or released.

Jawad Bendaoud was taken into custody Nov. 18 moments after giving a television interview in which he acknowledged he had given shelter to two people from Belgium and said he didn't know who they were or what they planned. Among those killed in the apartment raid were Amdelhamid Abaaoud, the suspected mastermind, a female cousin and an unidentified man.
In the interview, Bendaoud, 29, told BFM television "I didn't know they were terrorists. I was asked to do a favor, I did a favor, sir."