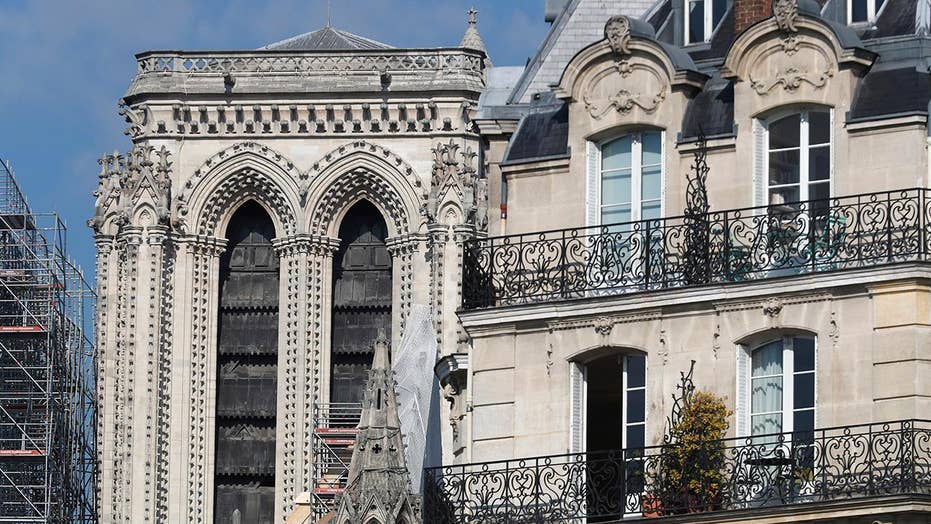 Firefighters hold a press conference on their efforts to fight the fire. Greg Palkot reports on what was said.

An environmental group in France filed a lawsuit over potential health risks from lead that was released during the devastating fire that ripped through Notre Dame Cathedral earlier this year.

"In three months, we have accumulated enough evidence of the inertia of the public authorities to decide to take legal action," Jacky Bonnemains, president of Robin des Bois, told French media.

The group filed the lawsuit on July 26, one day a day after a nursery and a school near Notre-Dame were shut following tests which found high levels of lead in their shared playground, Sky News reported.

The lawsuit does not name specific individuals as defendants. Paris City Hall would not comment on Tuesday, according to the Associated Press.

The city of Paris has ordered a deep cleaning of schools nearest Notre Dame, whose lead roof melted away in the fire last April. (AP Photo/Thibault Camus)

One of the tests -- which was conducted in a private school -- showed 698 micrograms of lead per square meter, 10 times higher than the 70 microgram level considered potentially dangerous, according to Sky News.

NOTRE-DAME FIRE MAY HAVE BEEN CAUSED BY CIGARETTE OR POWER FAILURE, INVESTIGATORS SAY

Children are especially vulnerable to health problems from lead poisoning and exposure, which can cause nerve and brain damage in severe cases.

Three French charities and the country's culture minister signed an agreement Monday ensuring transparency in how donations to rebuild the damaged cathedral are used. An estimated $946 million have poured in from both within France and other parts of the rest of the world.

The agreement specifies that donations will be used exclusively for preservation and restoration work at Notre Dame and training experts with needed skills, the Culture Ministry said.