Investigators in Paris said Thursday they believe an electrical short-circuit is most likely the cause behind the massive fire at Notre Dame Cathedral.

Investigators in Paris said Thursday they believe an electrical short-circuit is most likely the cause behind the massive fire at Notre Dame Cathedral.

The French judicial police official, who spoke anonymously about the ongoing probe, said investigators still don't have the go-ahead to search the rubble or work in the cathedral because of safety concerns.

MACRON VOWS TO REBUILD NOTRE DAME IN 5 YEARS, AS DRAMATIC FOOTAGE OF FIREFIGHTERS IS RELEASED

Although authorities consider the fire an accident, possibly as a result of restoration work at the global architectural treasure that survived almost 900 years of French history, Paris prosecutor Remy Heitz said earlier this week that the inquiry into what caused the fire would be “long and complex.”

Some 50 investigators are actively working the case and are expected to interview workers from five companies hired for the renovations to the cathedral’s roof, where the flames first broke out.

Firefighters are seen with a robot firefighter called Colossus, made by French robotics company Shark Robotics, outside Notre-Dame Cathedral after a major fire on April 16, 2019. (Getty Images)

On Monday, the fire raged through the cathedral for more than 12 hours, ultimately destroying its spire and roof but sparing its twin medieval bell towers. As the blaze roared, there was a frantic effort to rescue the monument's "most precious treasures," including the Crown of Thorns said to have been worn by Jesus.

Remarkably, no one was killed in the blaze, which occurred during a Mass, after firefighters and church officials speedily evacuated everyone inside.

A day after the inferno, French President Emmanuel Macron set an ambitious goal of rebuilding the famed cathedral "even more beautifully" in five years. Since then, donations have been pouring in all over the world. It surpassed the $1 billion mark Wednesday. 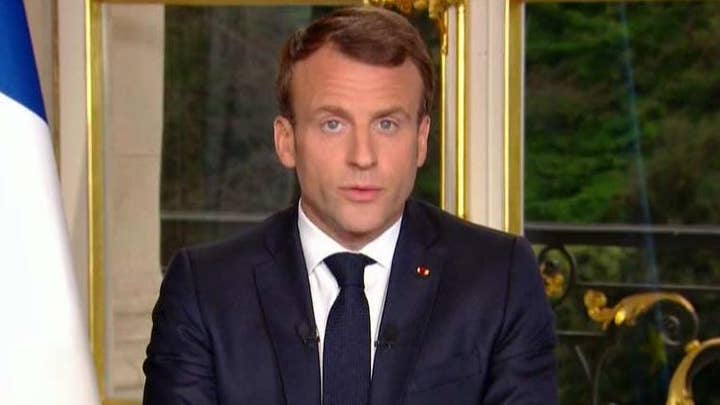 The rector of Notre Dame Cathedral has also proposed building a small, temporary church on the plaza outside the monument so that the faithful have a place of worship while the cathedral is closed for renovation.

"We mustn't say 'the cathedral is closed for five years' and that's it," Monsignor Patrick Chauvet told France's CNews television channel. "Can I not build an ephemeral cathedral on an esplanade (in front of Notre Dame)?"

On Thursday, workers were seen securing the support structure above one of Notre Dame's famed rose windows with wooden planks.

A huge crane and renovation teams worked at the site even after authorities warned that some of the structure remains at risk. Firefighters walked on what remains of the roof to inspect damage.

The island housing Notre Dame at the heart of the French capital remained largely empty and closed to everyone but residents. Businesses were shuttered and the usual tourist throngs were nowhere to be seen.

Passersby praised the French firefighters who helped save the overall structure of the cathedral.

Paris is also paying tribute Thursday to the 400 heroic firefighters who rushed into the massive to save the 12th-century cathedral from collapsing and rescued its irreplaceable treasures from the bright orange burning blaze.

Several hundred Paris firefighters, who are members of the French military, filed into the presidential Elysee Palace courtyard for a gathering hosted by Macron to share what his office said were "words of thanks." Top government ministers also attended.

Paris City Hall is holding a separate ceremony in the fire brigade's honor that will feature a concert and readings from Victor Hugo's "The Hunchback of Notre Dame."