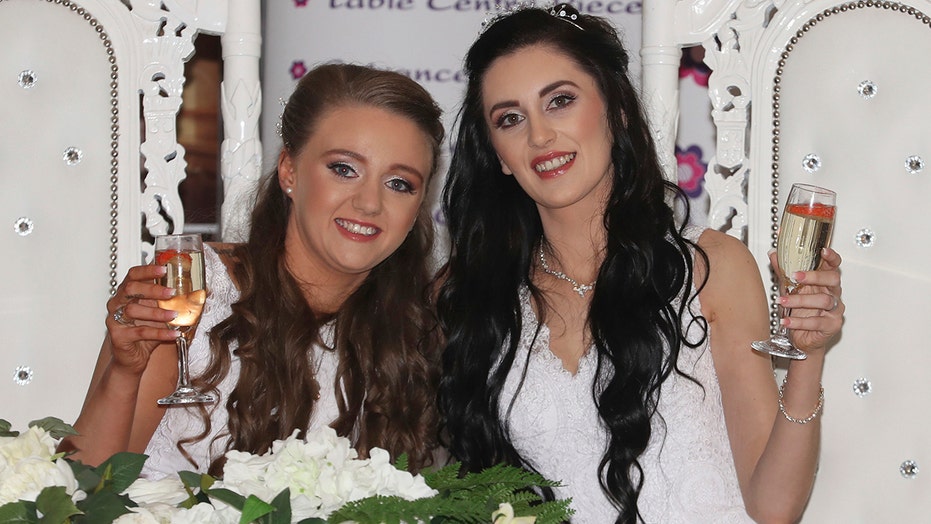 Care worker Robyn Peoples, 26, and waitress Sharni Edwards, 27 married at a ceremony in Carrickfergus, near Belfast. The couple said they had not intended to be the first to wed, but were thrilled to become symbols of change in Northern Ireland.

“We fought so long and hard for this opportunity to be seen as equal and now we are here and it's just amazing,” said Robyn. She and her wife both took the married name Edwards-Peoples.

She said the significance of the event was “to show that we are equal to a man and a woman. Our love is just the same, it's no different."

Northern Ireland's legislature did not follow the British and Scottish parliaments in allowing same-sex marriages starting in 2014. The socially conservative Democratic Unionist Party, the biggest group in the Northern Ireland Assembly, opposed legalization.

But after a campaign by equal-rights groups, Britain’s Parliament stepped in last year to bring the region into line with the rest of the country. The change took effect Jan. 13, with the first weddings able to take place four weeks later.

U.K. lawmakers acted while Northern Ireland’s regional assembly and government were suspended amid a feud between the main Irish nationalist and British unionist power-sharing parties. The power-sharing administration was restored last month after a three-year hiatus. But even if Northern Ireland lawmakers wanted to, they could not easily overturn the marriage law made by Parliament in London.

British lawmakers also voted last year to expand access to abortion, which had been severely restricted in Northern Ireland.

Among those who campaigned to change the marriage law was Sara Canning, whose partner, journalist Lyra McKee, was killed by gunfire from Irish Republican Army dissidents as she covered anti-police rioting in Londonderry in April 2019.

"This really means so much and has brought me some much-needed light in what has been a dark year," she said. "I know Lyra would have been so overjoyed to see this day.”

No one has been charged with McKee's killing, though police said four men were arrested in Londonderry, also known as Derry, on Tuesday.