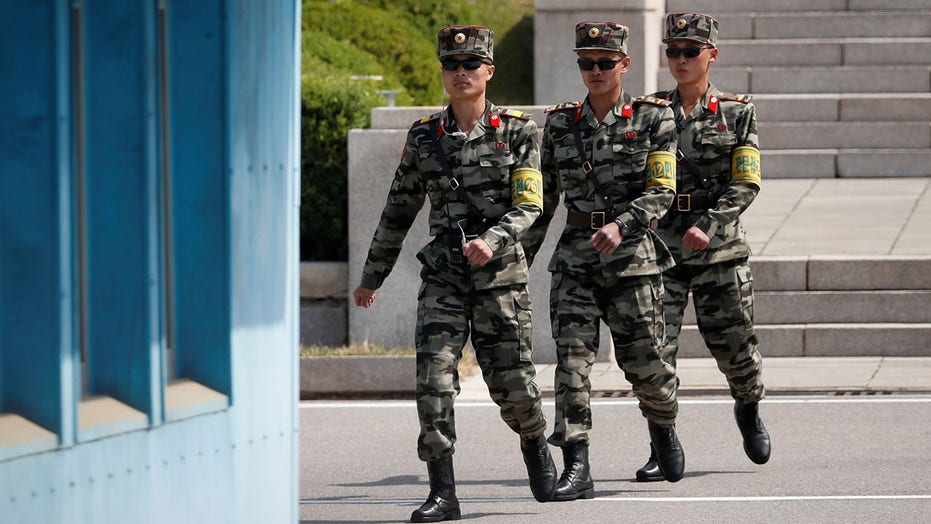 Two “hungry” North Korean soldiers were caught scrounging around for food in China, according to a report.

The guards, assigned to protect North Korea’s border, were spotted by locals stealing food from a house in the city of Dandong after crossing into China earlier this month, a source told DailyNK, a Seoul-based website that covers the North through a network of informants.

NORTH KOREAN SOLDIERS ARE BEING GIVEN LEAVE TO FIND FOOD, REPORT SAYS

North Korean soldiers patrol at the truce village of Panmunjom inside the demilitarized zone separating the two Koreas, in May. (Reuters)

KIM JONG UN INSPECTS NEW SUBMARINE IN A BID TO MOUNT PRESSURE ON US TO REVIVE TALKS, REPORT SAYS

The soldiers, reported to be in their early 20s and wearing military uniforms, were then arrested and sent back across the Yalu River into North Korea.

“I’ve never heard of low-ranking soldiers crossing over into China… because they’re hungry,” the source said. “The Chinese authorities believe, however, that the soldiers crossed into Chinese territory for that reason. The droughts last year and this year are the reason for the lack of food.”

It is not clear if the soldiers have faced any punishment.

DailyNK reports that North Korean border guards have been under increasing financial strain due to international sanctions that have been placed upon the Hermit Kingdom, leading to a decline in smuggling. The guards, the website says, rely on bribes from smugglers and defectors as a source of income.