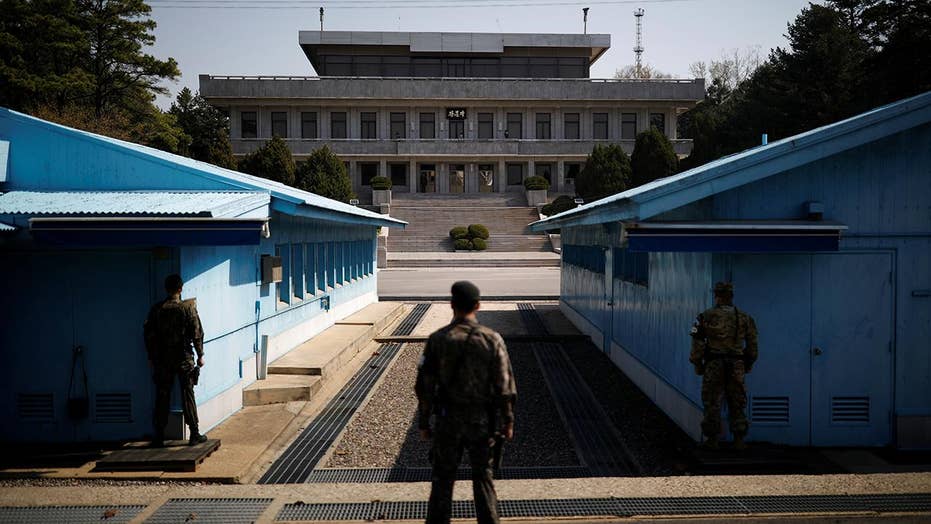 US team on Korean peninsula ahead of canceled summit

President Trump had abruptly called off the highly anticipated summit with Kim before retracting a day later.

Kim Jong Un’s chief of staff, Kim Chang Son, arrived in Singapore by way of Beijing, where he told reporters he was “going to play” in Singapore.

Meanwhile, U.S. government officials, flew to Singapore from U.S. Yokota Air Base in Japan, to work out the details of the June 12 summit.

Monday night’s pre-advance meeting follows a surprise second meeting between Kim Jon Ung and South Korean President Moon Jae-in on Saturday and a meeting between North Korean officials and the U.S. State Department on Sunday. Both meetings were held at the border village of Panmunjom.

In this May 26, 2018 photo, South Korean President Moon Jae-in meets with North Korean leader Kim Jong Un as he leaves after their summit at the truce village of Panmunjom, North Korea. (REUTERS)

The two Korean leaders had previously met in Panmunjom on April 27, to discuss denuclearization and a formal end to the Korean War – which technically hasn’t ended since 1953.

According to reports, Moon and Kim agreed on Saturday that the summit with Trump must proceed.

North Korea has said it will not give up its nuclear program until the United States withdraws its 28,500 troops stationed in South Korea and end its decades-long alliance with Seoul.