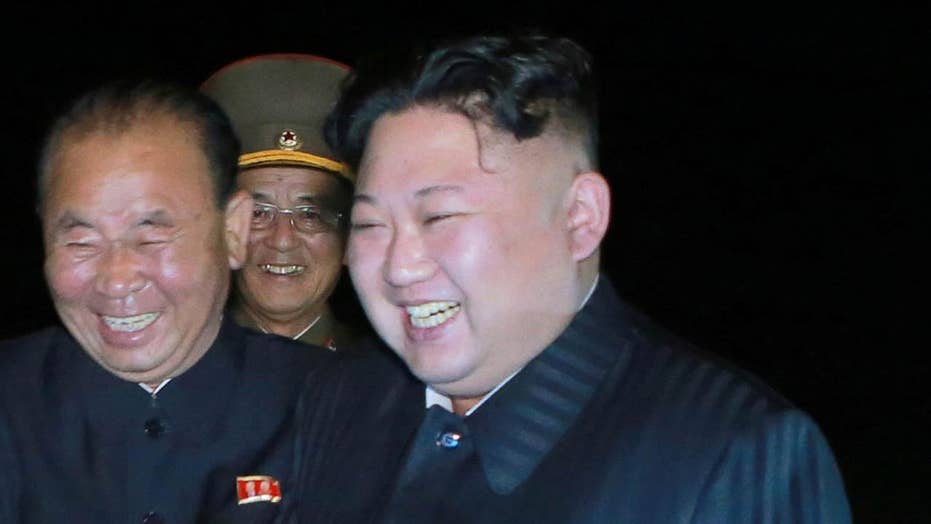 Washington Post: The rogue regime successfully produced a miniature warhead for its missiles

North Korea and President Trump lashed out at each other within hours on Tuesday, in both cases threatening to hit the other side with a barrage of "fire."

The threats, between the North Korean Army and Trump, came shortly after a report -- confirmed by Fox News -- that the regime has produced a compact nuclear warhead that could fit on a missile capable of reaching the United States.

Speaking at his Bedminster golf resort in New Jersey, Trump vowed to unleash “fire” and “fury.” He said that North Korea’s threats of nuclear war “will be met with fire, fury and frankly power, the likes of which the world has never seen before.”

He continued, saying that North Korean dictator Kim Jong Un “has been threatening beyond a normal state,” and added that the communist country “best not make any more threats to the United States.”

North Korea soon fired back with a threat of its own. The Korean People’s Army claimed in a statement that it was looking into a plan to hit Guam, a U.S. territory, with missiles that would create an “enveloping fire” around the island.

The threat was released by state-run media, and said the purpose of striking Guam would be to subdue the U.S. military bases there, particularly the Anderson Air Force base where nuclear-bombers are stationed.

TRUMP: NORTH KOREA 'WILL BE MET WITH FIRE AND FURY LIKE THE WORLD HAS NEVER SEEN' IF MORE THREATS EMERGE

A different statement released said that the regime “could carry out a pre-emptive operation if the United States showed signs of provocation,” according to a Reuters report.

The threats from North Korea came days after the United Nations Security Council voted unanimously to sanction the country. The resolution approved on Saturday bans North Korean exports of coal, iron, iron ore, lead, lead ore and seafood -- resources that are worth more than $1 billion to the regime.