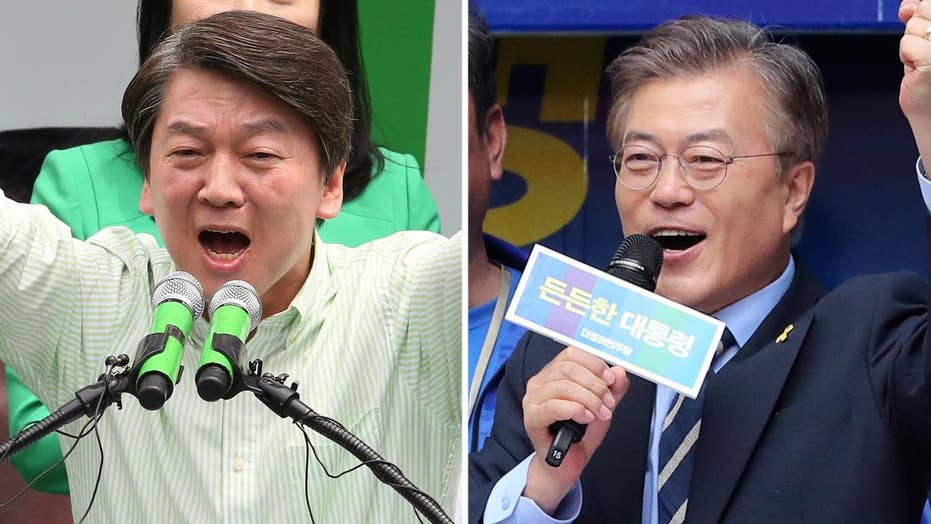 Polls show Moon Jae-in is the frontrunner who is pushing for direct negotiations with North Korea; Rich Edson has the story for 'Special Report'

South Korean voters will select their new president Tuesday, less than two months after the impeachment and removal of President Park Geun-hye.

Addressing the North Korean threat and South Korea’s relationship with the United States are primary issues in this abridged campaign.

"Who is (going to be) the president? Who can confidently say what he has to say to the U.S., China, Japan, and North Korea?" said Moon Jae-in, a human rights lawyer leading the polls as the Democratic Party candidate.

He said sanctions alone are insufficient in addressing North Korea’s nuclear program.  Moon said he wants direct negotiations with North Korean dictator Kim Jong Un and has opposed the process that led to the United States deploying an anti-missile system in South Korea.

His conservative opponents charge Moon is too conciliatory toward North Korea.

Ahn Cheol-soo is a former physician and software entrepreneur.  He is a political centrist in South Korea and founder of the People’s Party.  Also running to the right of Moon is Hong Joon-pyo, a former governor and prosecutor and the Liberty Korea Party candidate.

“One rule I always follow, never predict what happens in South Korean politics.

PRISONER OF NORTH KOREA: AN AMERICAN SAFE AT HOME SHARES HIS ORDEAL

The polls have been volatile during the 30 days of the election campaign process, but Moon has held a steady lead throughout, said Scott Snyder, a senior fellow for Korea studies and director of the program on U.S.-Korea policy at the Council on Foreign Relations.

"There will be new tensions in the U.S.- ROK alliance relationship that have not been there under conservative governments over the course of the past 8 or 9 years,” he said, referring to if Moon wins this election.

In a book he published in January, Moon said in that South Korea should learn to “say no to the Americans.”

President Donald Trump recently threatened to terminate or renegotiate the 2012 free-trade agreement between the two countries. And there is still opposition in South Korea, and China, to the U.S. installation of Terminal High Altitude Area Defense, or THAAD missile-defense system.

“The fact of the matter is that, at this point, it's a fait accompli and it's going to be harder to reverse that decision based on the fact that it's already there,” said Snyder of the recently operational THAAD.  “I think that's part of the reason why, in fact, the deployment was accelerated.”

The United States is employing a campaign to pressure North Korea with diplomatic and economic isolation.  Part of that effort is to push China to fully implement United Nations Security Council sanctions.