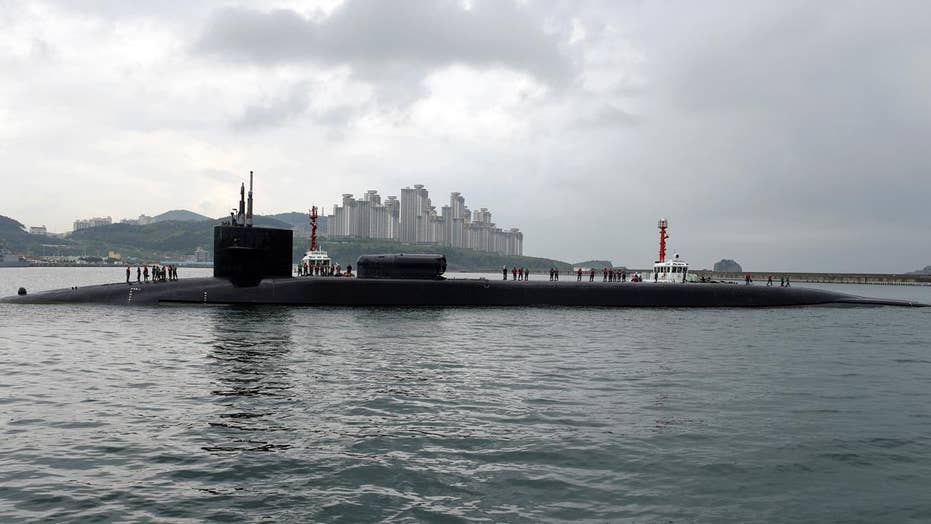 The USS Michigan, a nuclear-powered Ohio class submarine, was set to pull into the South Korean port of Busan for a hull check, as the USS Vinson aircraft carrier strike group approached the region, military sources confirmed Monday to Fox News.

The carrier group was in the Philippine Sea in waters south of Japan, according to senior U.S. defense officials.

When asked about the USS Michigan, Lieutenant commander Matt Knight with U.S. Pacific Fleet told Fox News in a statement the submarine was on "routine deployment."

"U.S. Navy ships and submarines routinely make port calls in a variety of locations," Knight said. "As a matter of routine, we do not discuss future operations or the details regarding the operations of our submarines. USS Michigan is currently on a routine deployment to the Indo-Asia-Pacific."

The USS Michigan is one of four Ohio-class guided-missile submarines, originally designed to launch nuclear missiles, that were converted between 2003 and 2007 to be able to fire Tomahawk cruise missiles.

According to the U.S. Navy, “combined, the four SSGNs represent more than half of the Submarine Force's vertical launch payload capacity with each SSGN capable of carrying up to 154 Tomahawk land-attack cruise missiles”. Additionally, the converted submarines can carry and deploy as many as 66 special operations personnel.

The four converted submarines can carry up to 616 tomahawk missiles, or over ten times the number launched on Syria earlier this month.  Adding up to as 265 special operators, like Navy SEALs, and these sea going vessels are, according to the Navy, “land attack and SOF [Special Operation Forces] platforms.”