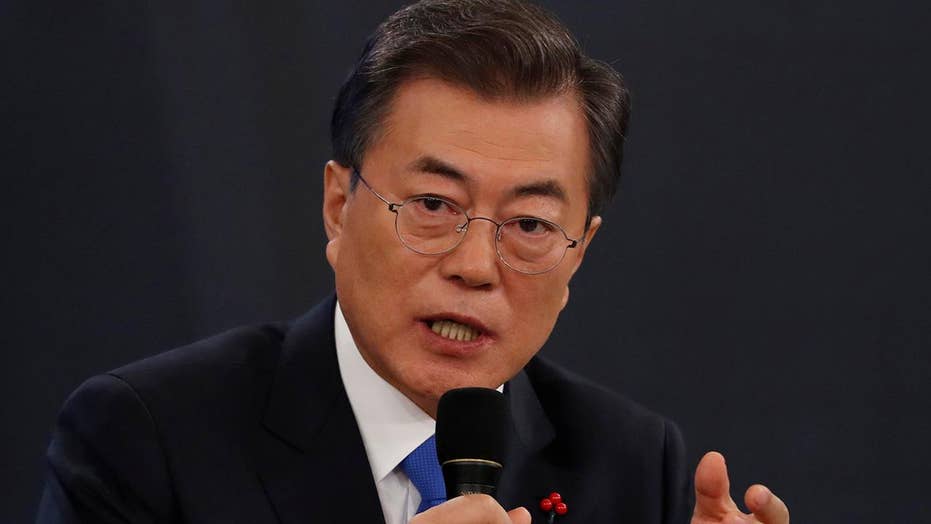 North Korea slammed South Korean President Moon Jae-in on Sunday for giving President Trump “big credit in the talks between Pyongyang and Seoul, threatening to pull its delegation heading to Pyeongchang Winter Olympics — but earlier lauded Kim Jong Un’s “brilliant” policy for “reunification” between the North and the South.

"[Moon] even made such rubbish that the North was led to dialogue to open up the chapter for 'the North's denuclearization,' not for the improvement of the South-North relations," the KCNA statement said. "The present South Korean chief executive's attitude casts doubt as to his intent to improve the North-South ties and build confidence."

Moon said during his New Year news conference last week: “I think President Trump deserves big credit for bringing about the inter-Korean talks. It could be a resulting work of the U.S.-led sanctions and pressure.”

Though North Korea insisted the regime will push to improve ties with the South, it will “never remain an onlooker to sordid acts of chilling the efforts,” the statement said.

The regime also threatened to pull its delegation heading to the Winter Olympics, saying: "They should know that train and bus carrying our delegation to the Olympics are still in Pyongyang."

North Korea’s newspaper Rodong Sinmun earlier praised Kim for his “brilliant” policy on pushing for a new era of talks with South Korea, calling its leader the “bright lodestar of national reunification.”

Delegations from the North and the South met last week for the first time in more than two years. (Reuters)

“The recent inter-Korean high-level talks are a precious fruition of the new policy set forth by the respected Supreme Leader in his New Year Address to improve the north-south relations,” Rodong Sinmun said in its commentary over the weekend. “He is a peerless patriot and the supreme incarnation of love and benevolence as he is creditably carrying forward the patriotic history with the same warm love for the nation and benevolence as those of the great leaders.”

NORTH KOREA'S WEAPONS 'ARE ONLY AIMED AT THE US,' REGIME OFFICIAL SAYS

It added, “A new dawn of national reunification is breaking thanks to his warm patriotic will and under his extraordinary leadership.”

"It is important to realize reconciliation and unity between peoples in order to improve North-South relations and create an atmosphere conducive to reunification," the state-run newspaper said.

North and South Korean officials are expected to meet again on Monday to discuss the Hermit Kingdom's art troupe's visit to the Winter Olympics. (Reuters)

North Korea agreed to send a delegation — including high-ranking officials, cheerleaders, performing artists and taekwondo athletes — to the Winter Olympics between Feb. 9 and 25, the first sign of a possible thaw in relationship between to rivaling sides.

North and South officials are expected to meet on Monday in the Panmunjom Village to talk about the regime’s art troupe’s visit to the Olympic Games, Yonhap reported Sunday. Seoul officials are also expected to bring up its proposal for the two Koreas’ joint march during the Olympics’ opening ceremony.