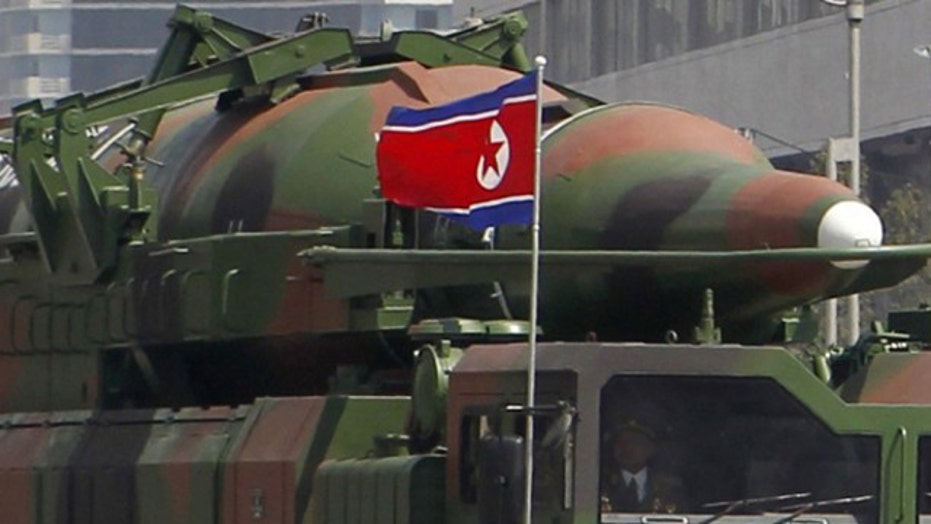 No nukes for Iran, but OK for North Korea?

North Korea's government said Tuesday that it had no interest in pursuing a nuclear agreement of its own with the U.S. as long as Washington pursued what Pyongyang described as "provocative" U.S. policies.

The statement from the isolated, totalitarian country's Foreign Ministry was its first official response to the agreement concluded earlier this month between Iran and six global powers, including the U.S.

The unidentified Foreign Ministry spokesman said the North's nuclear deterrent was "not a plaything to be put on the negotiating table" in the statement, which was carried by the official Korean Central News Agency. There was no immediate comment form the U.S.

North Korea's nuclear program is a major regional concern, with the country having conducted atomic weapons tests in 2006, 2009 and 2013. International nuclear disarmament talks have been stalled since early 2009, and outside analysts believe the North has built a small but growing nuclear bomb arsenal.

The Foreign Ministry spokesman said North Korea is different from Iran because it already has nuclear weapons. He said the North faces constant military and nuclear threats from the U.S., citing its regular military exercises with South Korea.

On Thursday, U.S. Undersecretary of State Wendy Sherman had said that Iran’s compliance with the terms of the agreement, followed by the lifting of sanctions, "might give North Korea second thoughts."

But Tuesday's statement said that North Korea "is not interested at all in the dialogue to discuss the issue of making it freeze or dismantle its nukes unilaterally first," adding that the North "remains unchanged in the mission of its nuclear force as long as the U.S. continues pursuing its hostile policy toward" the country.

In May, U.S. Secretary of State John Kerry said that the U.S., South Korea, China, Russia, and Japan were coordinating attempts to engage North Korea in preliminary talks about Pyongyang's nuclear program. However, officials in Washington and Seoul told the Wall Street Journal that North Korea had not responded to overtures made by the U.S. and South Korea in recent months.

The so-called six-party talks began in 2003 to negotiate for North Korea’s denuclearization in exchange for economic aid and security guarantees. Talks have been stalled since late 2008. Earlier this year, the Journal reported that Chinese experts had warned U.S. officials that North Korea could double the size of its nuclear arsenal by the beginning of next year.

The U.S. stations about 28,500 troops in South Korea as deterrence against potential aggression from North Korea, a legacy of the 1950-53 Korean War, which ended with an armistice, not a peace treaty.

Under the Iranian nuclear deal reached by Tehran, Washington and others, Iran's nuclear program will be curbed for a decade in exchange for potentially hundreds of billions of dollars' worth of relief from international sanctions. Many key penalties on the Iranian economy, such as those related to the energy and financial sectors, could be lifted by the end of the year.