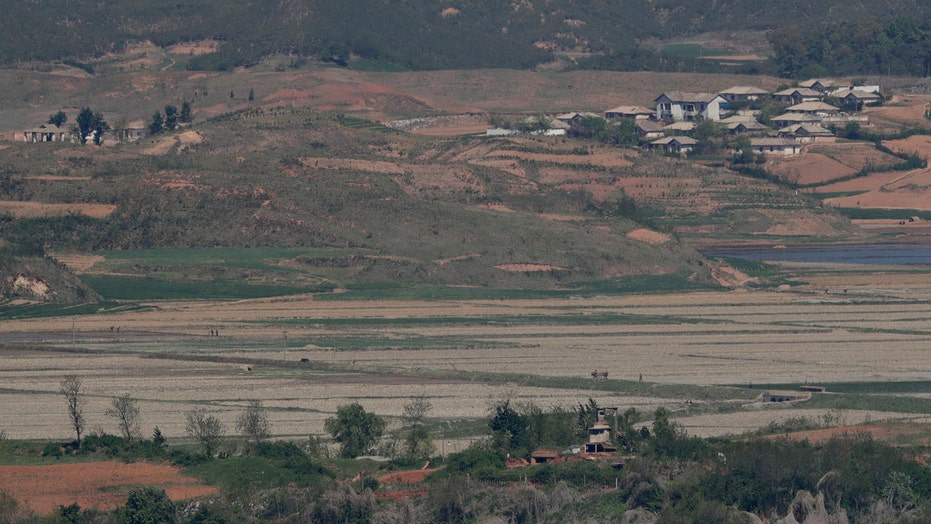 The Hermit Kingdom is also apparently the barren kingdom.

North Korea disclosed on Wednesday it is suffering its worst drought in nearly four decades, amid growing concerns the country is dangerously short on food.

The state-run Korean Central News Agency said that only 2.1 inches of rain fell throughout the country in the first five months of this year, the lowest amount since the same period in 1982 when 2 inches of rain on average fell.

The current conditions, described by KCNA as "extreme drought", are expected to continue at least until the end of May.

North Korean media outlets called on citizens on Thursday to find new sources of water, according to the Yonhap News Agency.

North Korea said it is suffering its worst drought in nearly four decades after only 2.1 inches of rain fell throughout the country in the first five months of this year. (AP Photo/Lee Jin-man)

The country's Rodong Sinmun newspaper reported that workers are attempting to find new water sources and mobilize pumps and irrigation equipment to minimize the damage to agriculture.

Rodong Sinmun said the efforts are part of the "struggle to prevent damage from drought is a fierce battle against the nature to protect socialism."

The ongoing drought is expected to add to an already perilous situation facing the North.

Earlier this month, United Nations food agencies said in a joint assessment about 10 million people in North Korea, about 40 percent of the population, were facing "severe food shortages" after the country had one of the worst harvests in a decade.

"The situation could further deteriorate during the lean season from May to September, if no proper and urgent humanitarian actions are taken," the report said.

North Korean officials have blamed the food shortage on bad weather and international economic sanctions that were toughened after the country conducted a series of high-profile nuclear and missile tests in recent years.

The official Korean Central News Agency said Wednesday, May 15, that an average of 2.1 inches of rain fell throughout the country in the first five months of this year, the lowest level since 1982. (AP Photo/Wong Maye-E, File)

In February, North Korea's ambassador to the United Nations, Kim Song, issued a rare appeal for urgent food assistance, saying the sanctions were "barbaric and inhuman," according to Sky News.

"There is a dreadful restriction by sanctions on imports of all sorts of metal farming facilities, such as tractors, harvesters... as well as chemical fertilizer, pesticide and herbicide," he wrote.

In February, President Trump and North Korean leader Kim Jong Un met in Vietnam for their second summit, but negotiations fizzled. The North requested sanctions relief in exchange for partial denuclearization measures. The U.S. balked at the request, insisting sanctions would not be relaxed until complete denuclearization.

United Nations food agencies have warned about 10 million people in North Korea, about 40 percent of the population, are facing "severe food shortages" after the country had one of the worst harvests in a decade. (AP Photo/Wong Maye-E, File)

North Korea suffered a devastating famine in the mid-1990s that is estimated to have killed hundreds of thousands of people.