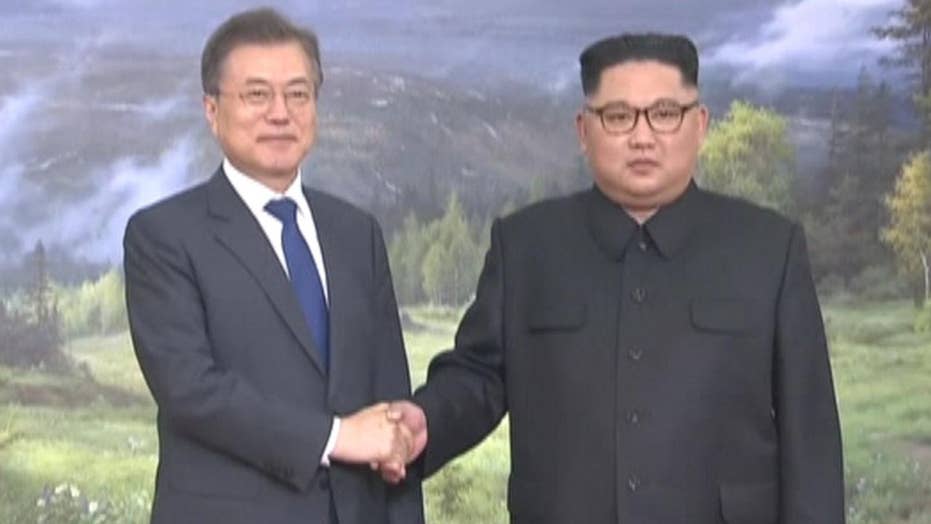 In a surprise turn of events, North Korean leader Kim Jong Un met with South Korean President Moon Jae-in in the demilitarized zone for the second time in a month on Saturday to discuss the peace commitments they reached in their first summit.

The meeting came hours after President Donald Trump suggested his June 12 meeting with Kim may still go ahead.

Moon’s office, who released photos of the meeting, said the leaders met on the North Korean side of the demilitarized zone in the village of Panmunjom between 3 and 5 p.m. local time. The Blue House said Moon would personally announce the outcome of Saturday’s summit on Sunday.

The two leaders reportedly spoke for two hours to "frankly discuss" how they could make the potential summit between Kim and Trump a success.

The meeting came hours after South Korea expressed relief over revived talks for a summit between Trump and Kim following a whirlwind 24 hours that saw the U.S. president cancel the meeting.

In their first summit in April, Kim and Moon announced vague aspirations for a nuclear-free Korean Peninsula and permanent peace, which Seoul has tried to sell as a meaningful breakthrough to set up the summit with Trump.

But relations between the rival Koreas chilled in recent weeks, with North Korea canceling a high-level meeting with Seoul over South Korea's participation in regular military exercises with the United States and insisting that it will not return to talks unless its grievances are resolved.

On Thursday, Trump canceled the highly anticipated summit with North Korea that had been set for next month, calling the talks “inappropriate” following the “hostility” displayed in the latest comments from Kim. South Korea, which brokered talks between Washington and Pyongyang, was caught off guard by Trump's abrupt cancellation of the summit.

The move to pull out of the summit, slated to take place in Singapore on June 12, came after threats from Kim to call off the talks. In a letter to Kim on Thursday, Trump said the world, and North Korea, had lost a "great opportunity for lasting peace and great prosperity."

New video has been released of North Korea demolishing tunnels to their alleged nuclear test site.

However, Trump told reporters on Thursday that the meeting could potentially be back on. On Friday, Trump tweeted, "We are having very productive talks with North Korea about reinstating the Summit which, if it does happen, will likely remain in Singapore on the same date, June 12th., and, if necessary, will be extended beyond that date."

Trump had nixed the summit following threats from North Korea. But hours after the U.S. pulled out of the meeting, North Korea issued a statement saying it's still willing to sit for talks with the United States "at any time, (in) any format."

Kim and Moon have met for the second time in a month to discuss peace commitments they reached in their first summit and Kim's potential meeting with President Donald Trump. (South Korea Presidential Blue House/Yonhap via AP)

“Very good news to receive the warm and productive statement from North Korea. We will soon see where it will lead, hopefully to long and enduring prosperity and peace. Only time (and talent) will tell!” Trump tweeted on Friday morning.

The White House has not immediately commented on the meeting between Moon and Kim.

Comments in North Korea's state media indicate Kim sees any meeting with Trump as an arms control negotiation between nuclear states, rather than a process to surrender his nukes. The North has said it will refuse to participate in talks where it would be unilaterally pressured to give up its nukes.