UNITED NATIONS – Tales of unbearable torture and deaths of anti-government protesters at the hands of the Nicaraguan security forces and paramilitaries were heard at the United Nations Security Council.

The meeting early Wednesday was called by U.S. Ambassador Nikki Haley, in spite of protests from several countries —  including usual foes Russia, China and Bolivia who claimed it was not part of the council’s business. She brought the dire human rights situation in Nicaragua up for discussion at the Security Council.

Haley warned that just like Venezuela’s humanitarian and economic crisis, the situation in Nicaragua is at a precipice and told council members that Nicaraguan President Daniel Ortega and his Venezuelan counterpart Nicolas Maduro were very much alike.

“Daniel Ortega has adopted the tactics of the dictators he once ‘claimed’ to oppose. We shouldn’t be surprised. Daniel Ortega and Nicolas Maduro are cut from the same corrupt cloth,” she said. “They are both students of the same failed ideology. And they are both dictators who live in fear of their own people.”

Haley said that some 25,000 Nicaraguans have fled to neighboring countries in what she described as, “the beginnings of an exodus.”  Haley said the U.S. stood in solidarity with the Nicaraguan people, warning that the surge in asylum seekers will be overwhelming to neighboring states.

“The Security Council should not – it cannot – be a passive observer as Nicaragua continues to decline into a failed, corrupt, and dictatorial state. Because we know where this path leads. The Syrian exodus has produced millions of refugees, sowing instability throughout the Middle East and Europe. The Venezuelan exodus has become the largest displacement of people in the history of Latin America.”

Haley described how the Ortega regime had targeted the Catholic Church. 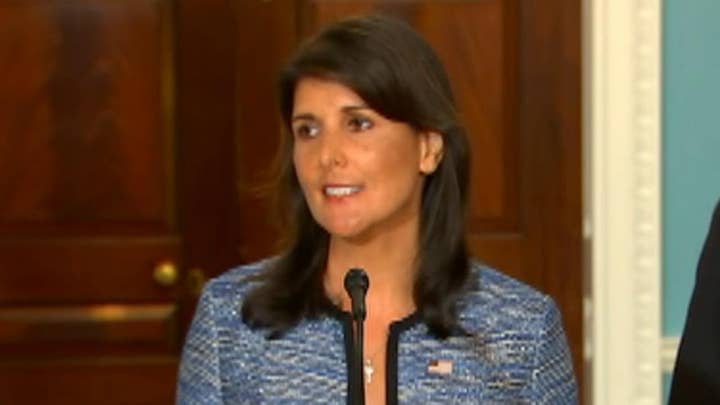 “In classic authoritarian fashion, Ortega is attempting to destroy the most respected institution that is rightfully standing up for the Nicaraguan people: the Catholic Church,” she said. “Clerics have been attacked. Catholic charities have been looted. Churches have been desecrated. “

Haley continued to warn that “now he is clinging to power in an equally authoritarian fashion: by killing, detaining, and brutalizing anyone who dares to oppose him.”  According to the Nicaraguan Association for Human Rights, over 448 people have been killed. Over 2,000 have been injured.”

The council heard a briefing from Felix Maradiaga, a Nicaraguan human rights activist whose description of the kinds of torture described by Ambassador Haley showed what he said was the brutality of the Ortega regime.

“Nicaragua has become a huge prison which seems to be without any controls, however everyday we see a climate of terror and indiscriminate persecution,” he said, “a mere trace of a tweet or an anti-government message will mean arbitrary detention and serious torture. Genitals have been cut off, people have been anally penetrated - men and women alike using pistols and rifles.”

Maradiaga said he himself had been a target of assassination and had witnessed many murders and abuses since the uprisings began earlier this year. He said Nicaragua was a “time bomb,” and appealed for Security Council intervention.

Yet several members, including Russia’s UN ambassador Vassily Nebenzia, complained that Nicaragua had no place on the council’s agenda. He condemned what he said was “the subversive policies of Washington,” in regards to the Central American country. He gave a list of what he said was the U.S.’s involvement in other Latin American countries, such as the Bay of Pigs invasion in Cuba in the 1960s.

Also there to protest his country’s innocence was Nicaragua’s Foreign Minister Denis Moncada who said that Nicaragua was not a threat to international peace and security and claimed his country was outside of the council’s purview.

Venezuela’s deputy UN Ambassador, Henry Suarez, also condemned the U.S. for holding the meeting. He then recalled a litany of what he said were the many threats made against his country by the Trump administration, leading him to ask,“ Who is the aggressor? Nicaragua, Venezuela?”