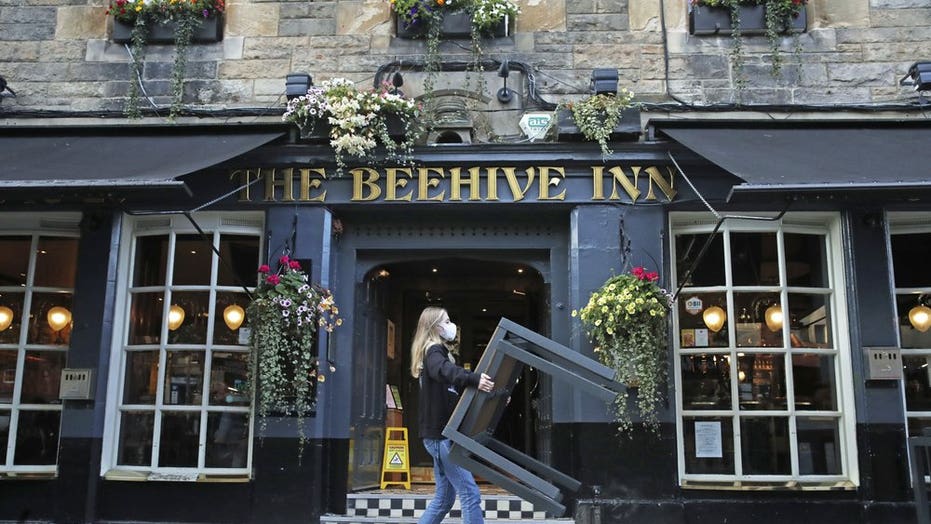 A sharp increase in new coronavirus cases has prompted one of the British government’s leading medical advisers to warn Sunday that the country is at a “tipping point similar to where we were in March.”

England’s deputy chief medical officer, Professor Jonathan Van-Tam, issued the warning as the pandemic surges anew across the U.K. and other parts of Europe, with the reopening of large sectors of the economy and the return of students to schools and universities.

Infection levels — and deaths — in the U.K. are rising at their fastest rates in months, the Associated Press reported.

A worker removes tables from outside the Beehive Inn, as temporary restrictions announced by First Minister Nicola Sturgeon to help curb the spread of coronavirus have come into effect at 6 p.m. Friday in Edinburgh. (Andrew Milligan/PA via AP)

"In our national fight against COVID-19, we are at a tipping point similar to where we were in March; but we can prevent history repeating itself if we all act now," Van-Tam said.

"Earlier in the year, we were fighting a semi-invisible disease, about which we had little knowledge, and it seeded in the community at great speed," he said. "Now we know where it is and how to tackle it -- let's grasp this opportunity and prevent history from repeating itself."

Although new coronavirus infections are rising throughout England, cities in the north — Liverpool, Manchester, Newcastle — have seen a disproportionate increase in new cases. While some rural areas in eastern England have fewer than 20 cases per 100,000 people, major metropolitan areas such as Manchester are recording levels above 500 per 100,000, nearly as bad as Madrid or Brussels.

As a result, national restrictions such as a 10 p.m. curfew on pubs and restaurants have been supplemented by local actions, including in some cases banning contacts between households. In Scotland’s two biggest cities, Glasgow and Edinburgh, pubs have already closed for 16 days to suppress the outbreak.

Prime Minister Boris Johnson is holding a call with his cabinet ministers on Sunday evening.

He is expected to announce a new three-tier local lockdown system Monday, which could temporarily close pubs and restaurants in the virus hotspots. The speculation is that those areas put under the tightest restrictions would forbid all household mixing, indoors or out.

Scottish First Minister Nicola Sturgeon defended her government's actions to suppress the virus north of the border, denying in an interview with Sky News that she’s lost control of the virus.

"No, absolutely not, we're working hard to make sure that doesn't happen."