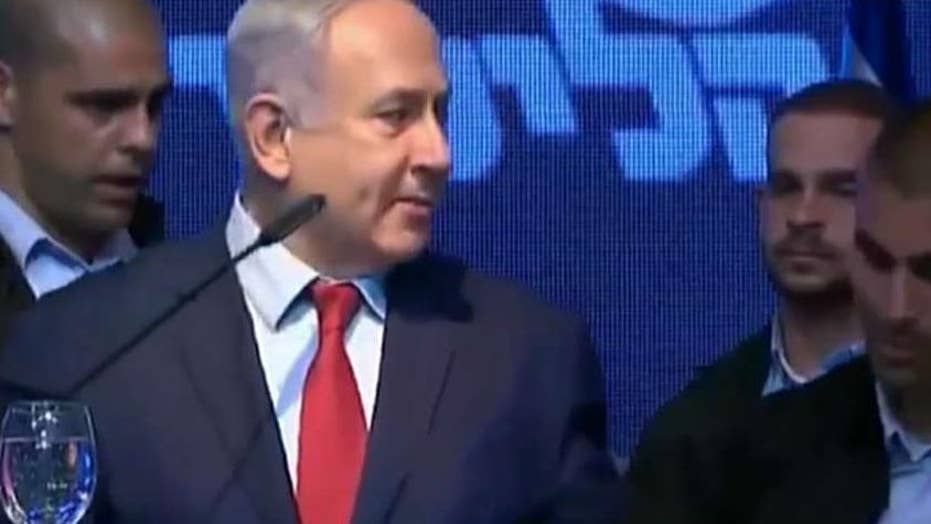 Israel's Prime Minister Benjamin Netanyahu said Monday he plans to apply his nation's sovereignty to West Bank settlements in Hebron, the largest Palestinian city, if he is reelected in Tuesday’s election.

He told Israeli Army Radio on Monday that he plans to annex "all the settlements" in the West Bank, including Hebron and Kiryat Arba, which is on the outskirts of Hebron, according to Israeli media outlets.

During the interview, he also pledged to apply Israeli sovereignty to “vital areas” outside the settlement blocs, but did not elaborate, The Times of Israel reported. He reportedly talked about the annexations happening in stages, coordinated with the Trump administration.

“I caused them [the Trump administration] to recognize Jerusalem as the capital of Israel, after that to move the embassy there, and then recognize our sovereignty over the Golan Heights,” the Israeli newspaper reported him as saying.

“And now after immense diplomatic efforts, I am laying the groundwork for applying Israeli sovereignty over the Jordan Valley as our eastern defensive wall, and after that, over all the settlements, and over other vital areas, inside the [settlement] blocs and outside the blocs. And all that, I want to do together with President Trump.”

Locked in a tight race and with legal woes hanging over him, Netanyahu, who is fighting for his political survival, made the announcement in a last-ditch effort to shore up nationalist support the day before a do-over election. Many of the right-wing voters live in settlements in the Israeli-occupied West Bank.

“I intend to extend sovereignty on all the settlements and the [settlement] blocs,” including “sites that have security importance or are important to Israel’s heritage,” Netanyahu said in an interview with Army Radio.

When he was asked if that included the hundreds of Jewish people who live under heavy military guard amid tens of thousands of Palestinians in Hebron, Netanyahu responded, “Of course.”

The International spokesman for the Jewish community of Hebron, Yishai Fleisher, said Hebron is the second most historic and holy city for Jews after Jerusalem.

He added, "The Jewish community of Hebron welcomes these statements and looks forward to pushing to make them a political reality and political policy."

Hebron is home to a holy site for Jews, Christians and Muslims, as the biblical patriarchs and matriarchs are buried in the city. Hebron is a frequent flashpoint between Jewish people and Palestinians living there. More than 200,000 Palestinians live in Hebron, along with about 800 Jewish people who live on one street, which is defended by the Israeli military. Kiryat Arba, Hebron's "sister city," is home to about 9,000 Jews, according to Fleisher.

In the final weeks of Netanyahu’s campaign, he has been doling out hard-line promises with the apparent goal of garnering more votes and securing reelection.

After Netanyahu failed to form a coalition following April’s vote, which caused the dissolution of Israeli Parliament, Israelis will head to the polls on Tuesday for the second election this year.

Last week Netanyahu pledged to begin annexing the Jordan Valley region of the West Bank, which makes up about a quarter of the area and is the centerpiece of any future Palestinian state, if he wins national elections. The pledge sparked denunciations from world leaders.

Following the announcement, a United Nations spokesman said the organization maintains that any Israeli move to control the Palestinian territory "would be devastating to the potential of reviving negotiations, regional peace and the very essence of a two-state solution."

“The Jordan Valley is part of Palestinian lands and any settlement or annexation is illegal,” Prime Minister Mohammed Shtayyeh said at the start of the meeting. “We will sue Israel in international courts for exploiting our land and we will continue our struggle against the occupation on the ground and in international forums.”

Netanyahu’s political rivals have dismissed his talk of annexation as an election ploy, pointing out that he hasn’t yet annexed any territory during his more than 10 years in office.

Before the elections in April, Netanyahu made a similar promise that he would apply Israeli sovereignty to parts of the West Bank if reelected. On Wednesday, Netanyahu said he had tried to annex the territory, but was shot down by Attorney General Avichai Mandelblit.