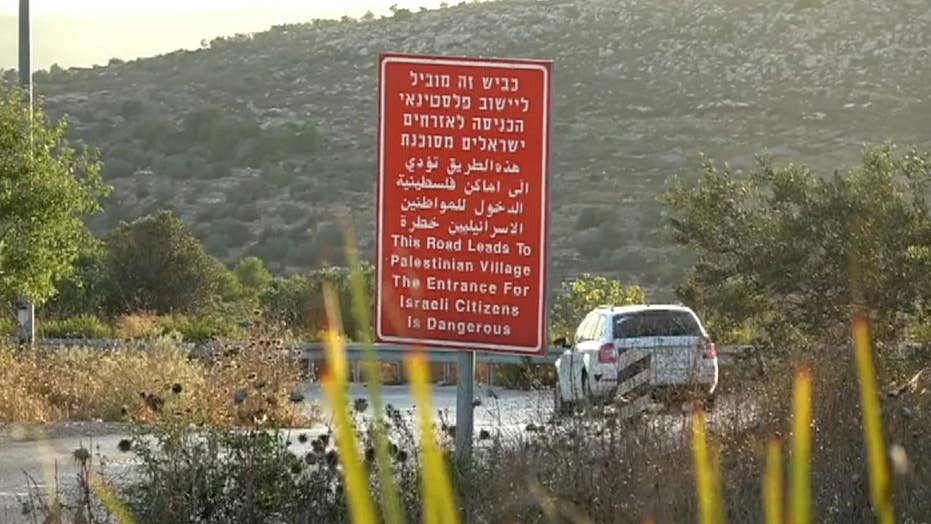 Coexistence in a 'danger' zone: An inside look at Samaria, the West Bank

Now that Benjamin Netanyahu is set to serve a fifth term as Israel's prime minister, he could extend Israeli sovereignty over parts of the West Bank -- something he promised to do if re-elected. The move would put an end to decades of Israel's policy recognizing that the lands it seized in the 1967 war would be part of a negotiated settlement with Palestinians. FoxNews.com's Talia Kaplan gives an inside look at what it's like for Palestinians and Israelis to live and work in Samaria, an area in the West Bank.

Now that Benjamin Netanyahu is set to serve a fifth term as Israel’s prime minister, he could extend Israeli sovereignty over parts of the West Bank -- something he promised to do if re-elected. The move would put an end to decades of Israel’s policy recognizing that the lands it seized in the Six-Day War in 1967 would be part of a negotiated settlement with Palestinians.

Netanyahu made the promise during the final stretch of his election campaign, as he competed for votes with right-wing parties that support annexing part of the West Bank.

David Ha’ivri is a Jewish resident of Kfar Tapuach, an Israeli settlement in Samaria, which is located in the area also known as the West Bank. Ha’ivri said he was “very happy” that Netanyahu is heading toward a record fifth term in office, especially because in interviews in the days before the election, Netanyahu vowed to begin annexing Israeli settlements in the West Bank if re-elected.

According to The Times of Israel, Netanyahu’s pledge came a day after he said on Israel’s Channel 13 news that he told President Trump that he would not evacuate “a single person” from any of the settlements.

If Netanyahu follows through on the promise, it would mark a dramatic development and potentially destroy the already diminishing hope for Palestinian statehood.

Ahmed Majdalani, an aide to Palestinian President Mahmoud Abbas, said the Palestinians will seek the help of the international community to try to block plans to annex parts of the West Bank.

The West Bank is currently home to about 2.8 million Palestinian Arabs and 400,000 Jewish residents in 127 communities commonly referred to as settlements. Israel took control of the land in 1967 and allowed Jewish settlers to move in, but Palestinians consider the West Bank illegally occupied Palestinian land.

Ha'ivri and his wife have lived in the Israeli settlement Kfar Tapuach for nearly three decades and raised their eight children there. Neither he nor the 220 Jewish families in the village are welcome in the Palestinian controlled communities, including the one that is a short walk from his home called Yasuf. The entrance to the Arab village, which is under complete control of the Palestinian Authority, has a sign that reads, “This Road Leads to Palestinian Village The Entrance For Israeli Citizens Is Dangerous."

"It's very unfortunate that there are people who don't want us to live here. This is our home, this is our homeland. This is where the Jewish people need to be," said Ha'ivri.

He thinks it's important to live in the place where his ancestors have lived continuously for thousands of years. It is a feeling shared by many other Jewish people in Samaria including Eliyahu Hillel who owns Kabir Winery in Elon Moreh, an Orthodox Jewish Israeli settlement.

“I’m living in the Bible. For me, the Bible is not history. It’s actuality, it’s present,” said Hillel, whose primary language is Hebrew.

He has lived in Elon Moreh for 35 years and raised his six kids in the Israeli settlement.

Hillel said he doesn’t mind having Palestinians as neighbors.

When asked if he ever feels like his family is in danger he answered, “Not very, not very."

In addition to the wineries, there are many factories in Samaria. Israelis are not permitted to work in Palestinian controlled territories but, according to local officials, most of the factory workers are Palestinian at the three industrial parks in Israeli-controlled Samaria.

"This (is an) injection molding factory named ‘Twitoplast,’ we do all the product(s) for the air condition business," said Moshe Lev-ran, Twitoplast’s Export Manager, as he described the factory which is in an industrial zone in Samaria called Barkan. He said the factory has about 150 employees and half are Palestinian.

When a Palestinian employee was asked if he likes working at Twitoplast he said "yes," adding that he doesn’t mind working with Jewish people. The employee doesn’t speak English and when asked in Hebrew if there are any problems he answered, “I am supposed to bring food for my kids, what am I supposed to do?”

Sofian Dagger is a Palestinian employee at Twitoplast, an Israeli plastics company in the West Bank.

Sofian Dagger, the plant manager, is also Palestinian. He has been working at Twitoplast for 20 years. He also does not speak English and when asked in Hebrew how it is for him to work in a factory with Jewish people and Arabs together he said, “We work together, it’s fine.”

When asked if he ever encounters any problems working for an Israeli company he said in Hebrew, “None at all. All my brothers, I have seven brothers, they all work for Jewish people.”

Dagger says he chose to work at Twitoplast because “the money is good," adding that the salary is better than any other place in the area. Dagger said that his son also works at the factory for the same reason.

According to Lev-ran, Twitoplast employees earn about 15-hundred dollars a month, which is more than double the wages of those employed in the Palestinian Authority, or PA governed areas. Palestinian employees at the factory also get benefits like social security, which Lev-ran said, they wouldn't receive if they worked in areas governed by the PA.

Since Israelis and Palestinians work well together at Twitoplast, Dagger wonders why there can’t be peace everywhere.

“I am asking everyone that there will be peace for everyone in the whole world. Not just in Israel, not just in Palestine, not just in America. We need peace, for the sake of the children. It’s a shame to have wars, it’s a shame,” said Dagger.

When asked if he thinks peace can be achieved he said, “Why not? It can happen.”

Lev-ran said he hopes Twitoplast proves that Palestinians and Israelis can coexist. He thinks peace will come when Palestinians prosper.

"A Palestinian that wake(s up) at 4 o'clock in the morning to come to work. He think(s) only one thing, how to bring food to his kids, that's what he think(s). He doesn't think how to kill me,” said Lev-ran. “So they ask me if I'm not worried when I come here to work. I'm not worried at all, we don't carry weapons here. I'm more worried in my Kibbutz (a communal settlement in Israel), which is near Gaza that I have 30 seconds to run to the shelter house when they shoot me a rocket, the Hamas. But if I provide the people in Gaza Strip work, they will fight against the Hamas and nobody will shoot me a rocket."

When asked what he thinks about a company like Twitoplast, where Palestinians and Israelis work together, Ha'ivri answered, “I think that that is wonderful and I think that many people outside of this area are not aware of those facts on the ground.”

The Associated Press contributed to this report. The video for this story was shot and edited by Talia Kaplan. Lexi Baker contributed to the filming of this piece. Stock footage provided by Pond5 and Shutterstock. Song: “The Legitimates” by Lionel Cohen.