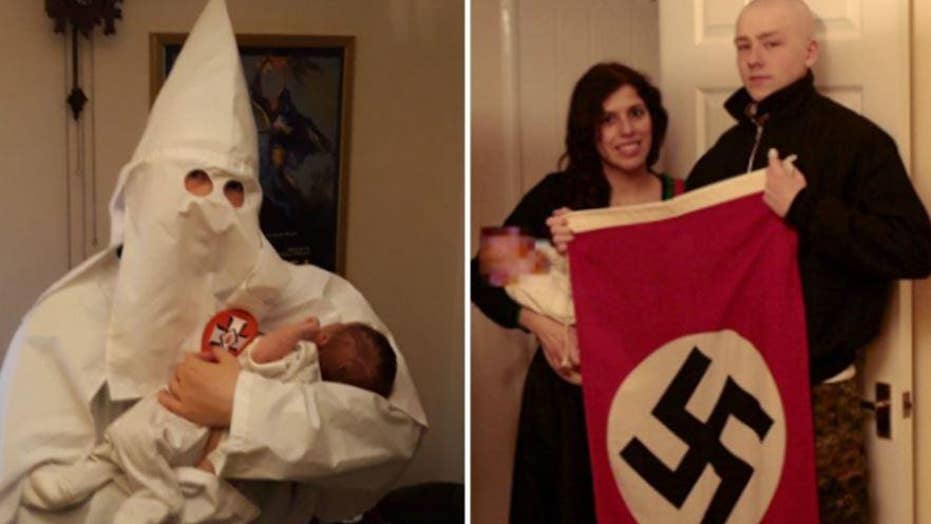 British Neo-Nazi couple who named baby after Adolf Hitler sentenced to prison for being part of terrorist group.

A British neo-Nazi couple who named their son after Adolf Hitler was sentenced Tuesday to several years in prison for being part of a terrorist group.

Adam Thomas, 22, was sentenced to six years and six months in prison, while Claudia Patatas, 38, was jailed for five years, Sky News reported.

Thomas and Patatas were found guilty for being members of National Action, a far-right neo-Nazi organization in the United Kingdom that was banned in 2016. Judge Melbourne Inman QC, who handed down the sentence, said the group had “horrific aims.”

"Its aims and objectives are the overthrow of democracy in this country by serious violence and murder, and the imposition of a Nazi-style state which would eradicate whole sections of society by such violence and mass murder," the judge said.

Thomas and Patatas led a not-so-secret double life, one working as an Amazon security guard and the other as a wedding photographer, while preaching neo-Nazi beliefs, prosecutors said. The couple gave their son the middle name “Adolf” in “admiration of the German dictator who slaughtered millions of Jews during World War II.

Their home contained swastika-covered cushions and a swastika-shaped pastry cutter, along with machetes, knives and crossbows near a baby crib, the BBC reported.

The couple also posed for photos that showed them holding their son while displaying a flag with a swastika on it. Thomas was seen in another picture cradling his son while wearing the white robe of the Ku Klux Klan.

Prosecutors said the couple wanted to “bring back concentration camps” and that Thomas once told another National Action member that “all Jews must be put to death” and “all non-whites [were] intolerable.” Thomas was also found guilty of having the book Anarchist’s Cookbook — considered a terrorist manual that had instructions to make “viable bombs,” Sky News reported.

Thomas and Patatas were among six people sentenced Tuesday. Daniel Bogunovic, 27, was also found guilty and sentenced to six years and four months in prison. Three other people previously pleaded guilty to being in the organization.