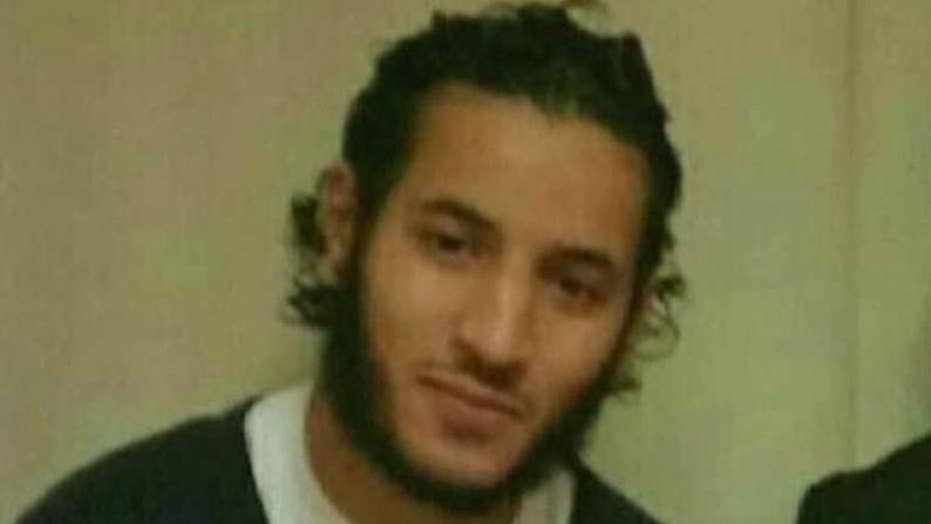 A Muslim radical who was being investigated for terror ties stabbed a French police chief to death outside his home, then tortured the man's wife in front of their toddler son -- all while livestreaming his rampage on Facebook.

The shocking attack in Magnanville, 35 miles north of Paris, ended after a three-hour standoff, when French commandoes stormed the home, rescuing the boy and killing Larossi Abballa, 25.

Later in the day, police carried out several hours of raids in the Paris suburb of Mantes-la-Jolie, where Abballa lived. A young pregnant woman wearing a hijab and an Islamic robe said her husband had been taken into custody from the building in the Musiciens neighborhood as police searched her home. The woman, who refused to be identified, said her husband knew Abballa, though police at the scene would not say whether the raids were linked directly to the police attack.

The Islamic State's Amaq news agency released a video that showed Abballa confessing, "I just killed a police officer and his wife," warning that attackers would launch other "surprises" during the ongoing Euro 2016 soccer tournament. The video appears to have been recorded inside the home of the couple as security forces closed in.

Before the standoff ended, Abballa, a French national with a prior terrorism conviction and ties to jihadists based in Pakistan, made a horrific appeal to his Facebook followers, writing, "I don't know what I'm going to do with the boy."

Jean-Baptiste Salvaing, 42, was not in uniform when he was ambushed and stabbed repeatedly in the stomach outside of his home shortly before 8.30 p.m. on Monday. His wife, a 36-year-old secretary at a local police station, was killed with a knife inside the residence while the couple's 3-year-old son hid behind a couch. The French interior minister called the slaughter "an abject terrorist act."

Three men believed to have close ties to Abbala were brought in for questioning by French police shortly after the attack, officials said.

Word that Abbala had recorded the 12-minute video of the attack and posted it on Facebook Live shocked the nation Tuesday morning. Abbala also tweeted twice during the killings.

"The toll is a heavy one," Interior Ministry spokesman Pierre-Henry Brandet told reporters at the scene, his voice heavy with emotion.

Authorities found a Koran, headscarf and two other books in a vehicle used by Abbala, Paris prosecutor Francois Molins said, and a list of other targets -- including police officers and journalists -- was found at Abbala's home.

Abbala was sentenced in 2013 to three years in prison, including six months suspended, for trying to recruit jihadists to fight in Pakistan, the BBC reported.

But Abbala had also been the subject of a more recent terror investigation and was allegedly on a government list of individuals seen as a danger to the state, the BBC reported.

French police had recently wiretapped Abbala, but had not found anything incriminating by the time of the attack, officials said.

Abbala pledged allegiance to ISIS three weeks ago and reportedly did during the filmed portion of the attack, too. The Islamic State's Amaq news agency later cited an unnamed "source" as saying an ISIS fighter carried out the attack and the jihadist group claimed responsibility for the assault on its Albayan Radio, Reuters reported.

Molins said Abballa's attack was a response to ISIS calls to "kill non-believers where they live" during Ramadan.

On Abbala's Facebook page, which was later taken down, the terrorist wrote that "the Euros will be a graveyard," according to the BBC.

French media, some of them citing unnamed neighbors, reported that the attacker was heard shouting "Allahu Akbar" — Arabic for "God is Great" — during the attack.

Abballa stayed at prayers so long at his neighborhood mosque the day of the attack that mosque employees had to make him leave. The rector of the small mosque said Abballa attended services rarely in recent months, but showed up to pray a few hours before the killings. Rector Mohamed Droussi said Abballa was reading the Koran for a long time, and was the last one to leave.

"I took the key and I said, 'we are closing,'" Droussi said.

Speaking after an emergency meeting convened Tuesday morning by French President Francois Hollande, Interior Minister Bernard Cazeneuve said more than 100 people seen as potential threats have been arrested in France this year, including in recent weeks.

Cazeneuve also warned that the threat of terrorism "is high in France, it's high in Europe, it's high in the Western world as shown by the events that happened 48 hours ago in the United States," a reference to the attack on an Orlando night club early Sunday.

Hollande himself said Monday's murders were "incontestably a terrorist act and warned that France was facing a terror threat "of a very large scale."

France, like other countries in Europe, has seen a series of stabbings aimed at police officers or soldiers and carried out by Muslim radicals. ISIS has encouraged its supporters to stage such attacks.

"Today every police officer is a target," Yves Lefebvre of police union Unite SGP Police-FO told The Associated Press, adding that attackers are "professionalizing" and can now find police in their homes.

Cazeneuve said Tuesday that police officers would now be allowed to take their service weapons home.

France has been under a state of emergency since a series of co-ordinated shootings and bombings by ISIS terrorists killed 130 people in Paris this past November. The country is currently hosting the European soccer championship, and stadiums and other public places are under tight security.

There was no indication that the murders would affect either of the two matches scheduled to take place Tuesday.

Fox News' Cicely Medintzeff and The Associated Press contributed to this report.