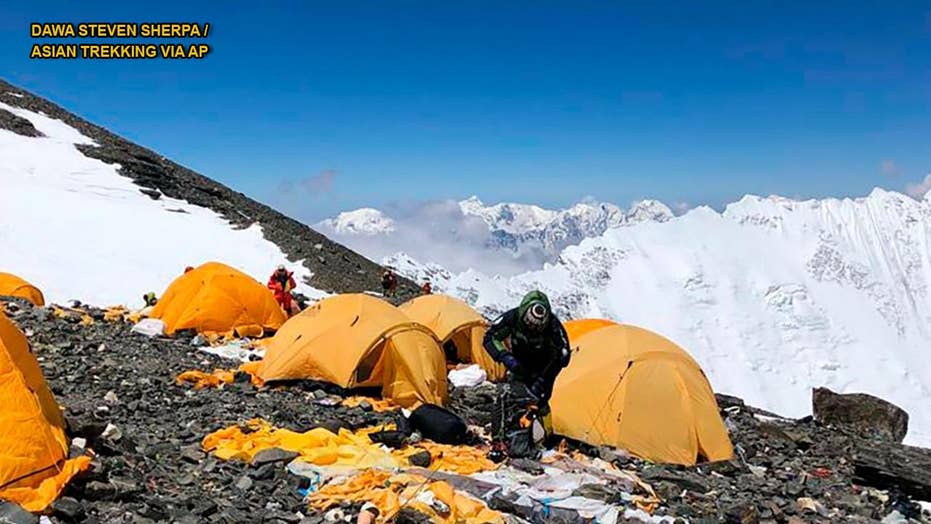 Mount Everest has a plumbing problem.

The current "biggest" threat to climbers on the world's tallest peak, the former head of the Nepal Mountaineering Association said, is the staggering amount of human excrement being left on its slopes -- with some estimates putting that number at more than 17,000 pounds for this season alone.

“The biggest problem and concern now on Everest is human waste," Ang Tshering told the Associated Press in an interview this week. "Hundreds of people are there for weeks who go to open toilets.”

It is impossible to know exactly how much litter is spread across Everest because it only becomes visible when the snow melts. But at Camp 2, two levels higher than Base Camp, sherpas who worked on the government’s cleanup drive this spring believe around 17,637 pounds of human excrement was left there during this year’s climbing season, the Associated Press reports.

Melting conditions at Camp 2 create an odor that is sickening to climbers, and the waste will eventually contaminate water sources below and become a health hazard, Tshering warns.

“During our expedition to Camp 2, eight of our 10 Sherpas got stomach illness from bad water at Camp 2,” said John All, a professor of environmental science at Western Washington University who visited Everest on a research expedition.

Ang Dorjee, who heads the independent Everest Pollution Control Committee, has demanded that the Nepal government institute some rules.

“The problem is there are no regulations on how to dispose of the human waste. Some climbers use biodegradable bags that have enzymes, which decompose human waste but most of them don’t,” he said.

Instead of using the makeshift toilets, many climbers dig a hole in the snow, letting the waste fall into small crevasses. However, rising temperatures have thinned the glacier, leaving fewer and smaller crevasses. The overflowing waste then spills downhill toward Base Camp and even communities below the mountain.

People living at the Base Camp use melted snow for drinking water -- and for them, the human excrement poses a health risk.

In this May 2019 photo, Nepalese army men pile up the garbage collected from Mount Everest in Namche Bajar, Solukhumbu district, Nepal. (AP)

Tshering and other mountaineers say the government should mandate the use of biodegradable bags for human waste. The bags are expensive and have to be imported from the United States.

Fox News’ Francesca Walton and the Associated Press contributed to this report.