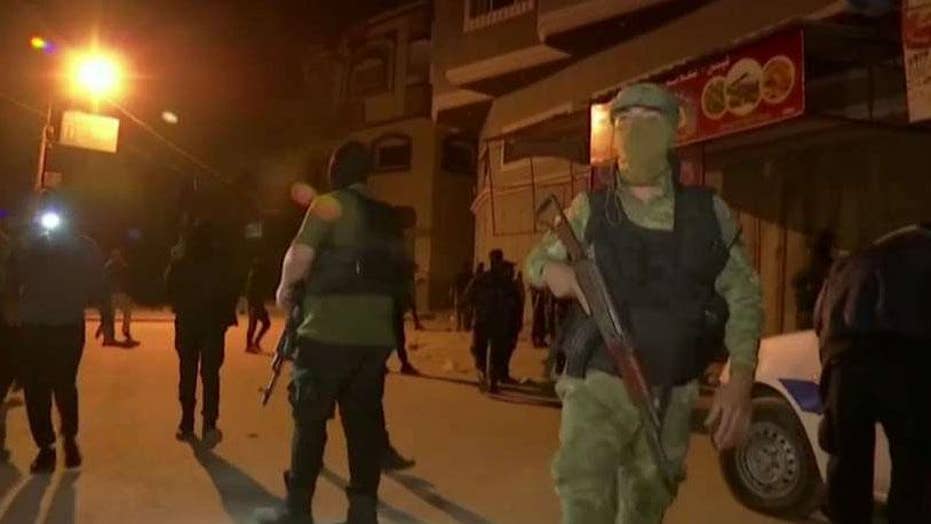 Islamic militants in the Gaza Strip sent a barrage of more than 200 rockets into Israel Tuesday and vowed further revenge after the Israeli military carried out a pair of targeted airstrikes on senior Islamic Jihad commanders, killing one in Gaza and missing the second in Syria.

An Israeli airstrike killed Baha Abu al-Ata, 42, and his wife as they slept in their home in eastern Gaza Tuesday, Israel Defense Forces (IDF) spokesman Lt. Col. Jonathan Conricus, said. Conricus added that Abu al-Ata was responsible for a number of recent rocket attacks on southern Israel and claimed he was actively planning new attacks.

"Baha Abu Al Ata was the senior commander of Islamic Jihad in Gaza, responsible for most attacks emanating from Gaza over the last year," IDF Chief of General Staff Lt. Gen. Aviv Kohavi said Tuesday. "He was a ticking time-bomb ... there was a window of opportunity that we utilized precisely."

“Israeli intelligence indicated that it was just a matter of time before he would carry out his next attack,” the IDF captioned a video posted on Twitter.

An IDF official told Fox News Abu al-Ata was targeted by the Israeli military because they learned that the senior Islamic Jihad commander wanted to combine anti-tank missile fire with suppressive fire and then have a terror squad come across the border to attack IDF troops. This specific plan, in addition to Abu al-Ata's previous terror coordination, was the reason why the assassination took place when it did, the official said.

He added that other Islamic Jihad militants should be worried because, “We have the intelligence and we have the capabilities,” to take out more people.

Abu al-Ata’s death set off the heaviest fighting in months between Israel and Islamic Jihad, an Iranian-backed militant group that is even more hard-line than Gaza’s Hamas rulers.

“The response to this crime will have no limits,” Islamic Jihad said in a statement.

A senior Hamas official told Fox News, “No one is looking for escalation and more violence, but the assassination of a such [sic] leader isn’t an easy thing, and if the Israelis continue attacking Gaza, not only Hamas but also other factions will respond.”

Rockets are launched from the Gaza Strip into Israel Tuesday. (AP Photo/Hatem Moussa)

“Israel is fully responsible for this round of violence,” the official added.

The official said if there is no ceasefire on Tuesday night, “it will be more difficult tomorrow” and pointed out that the losses are “becoming bigger.”

Gaza militants fired scores of rockets into Israel throughout the day on Tuesday, with some reaching as far as Tel Aviv.

“Islamic Jihad’s constant attacks against Israeli civilians continued all day on Tuesday when dozens of rockets were fired from Gaza at Israeli families,” IDF said in a video.

Israeli warplanes retaliated with a series of airstrikes on Islamic Jihad targets.

Eight people were killed, including at least seven militants.

The Israeli military struck additional Islamic Jihad militants right before they were able to launch more rockets, as well as more “terror targets” in Gaza belonging to the Islamic Jihad, the IDF announced on Twitter, adding that the strikes hit a training camp and underground weapons manufacturing and storage sites.

Later on Tuesday, the IDF tweeted that the Israeli military also destroyed rocket launchers in Gaza “that Islamic Jihad planned to use to destroy Israeli homes.”

In still another tweet, the IDF said that the Israeli Air Force struck the opening of an Islamic Jihad underground “terror tunnel” in Gaza on Tuesday alleging that the tunnel would have been used to attack Israeli civilians.

“Above and below ground, we will continue to defend Israeli civilians,” the IDF said.

A Syrian official checks the damage of a building targeted by Israeli missile strikes in Damascus early Tuesday. (SANA via AP)

The news agency said six people were wounded in the early morning attack on the building in the Mezzeh area of Damascus, adding that a third missile landed in a suburb of the capital, in Daraya, near Damascus.

The Islamic Jihad in Gaza said a member of its leadership, Akram al-Ajouri, survived an Israeli airstrike in Damascus on Tuesday, but his son was killed.

A woman surveys the damage to a house in Sderot, Israel, after it was hit by a rocket fired from Gaza Strip Tuesday. (AP Photo/Tsafrir Abayov)

Abu al-Ata’s father, Salim Abu al-Ata, said his son had been more cautious in recent days, disappearing for a week when he was blamed in Israeli media for the rockets fired into Israel on Nov. 2,  and was taking additional precautionary measures. He said he saw his son for the first time in a week on Monday when he came to sleep at home.

“It’s a crime to bomb him when he is asleep at his home,” Salim Abu al-Ata said.

Baha Abu al-Ata’s father said his son had been more cautious in recent days and was taking additional precautionary measures. Salim Abu al-Ata said his son had disappeared for a week this month at a time when his name was circulating in Israeli media blaming him for the rockets fired into Israel on November 2. (Israel Foreign Ministry)

Salim Abu al-Ata added that his son joined the Islamic Jihad at the age of 16 and didn’t go to college but “devoted himself to the resistance.”

The military said 90 percent of rockets fired Tuesday had been intercepted by the Iron Dome defense system.

Israel’s Magen David Adom, the country’s emergency medical and ambulance service, said it treated one person for shrapnel wounds and several dozen who were either injured fleeing rockets or suffered from stress symptoms.

Israeli residents across much of the country were ordered to stay indoors and avoid large gatherings for the rest of the day. Israel's military told people to stay indoors until Wednesday.

School and university studies, as well as “non-essential” jobs throughout southern Israel, have been canceled. Classes were also canceled in the Tel Aviv area. Non-essential work could continue in that area, but only if near a bomb shelter.

The European Union condemned the rocket attacks and called for “a rapid and complete de-escalation” and stressed that it “is now necessary to safeguard the lives and security of Palestinian and Israeli civilians.”

“The firing of rockets on civilian populations is totally unacceptable and must immediately stop,” the 28-nation bloc said in a statement.

Jordan’s foreign ministry also condemned the Israeli strike in the Gaza Strip, with spokesman Daifallah al-Fayez, blaming Israel for the escalation in violence that has developed.

He said the fighting “will only increase tension and violence, deepen the environment of despair and promote extremist agendas in the region.”

Al-Fayez called for Israel and the Palestinians to resume negotiations, saying that talks, along with an end to the Israeli-Egyptian blockade on the territory, could bring a solution to Gaza’s troubles.

Meantime, Egyptian officials said Cairo is trying to de-escalate tensions between Israel and Palestinian militants in Gaza.  The officials, who spoke on condition of anonymity, said Egypt’s general intelligence agency has stepped up communications and has “opened channels” with the U.S. and the European Union.

Egypt often steps in as a mediator between Israel and Gaza militants and brokered a cease-fire deal in May.