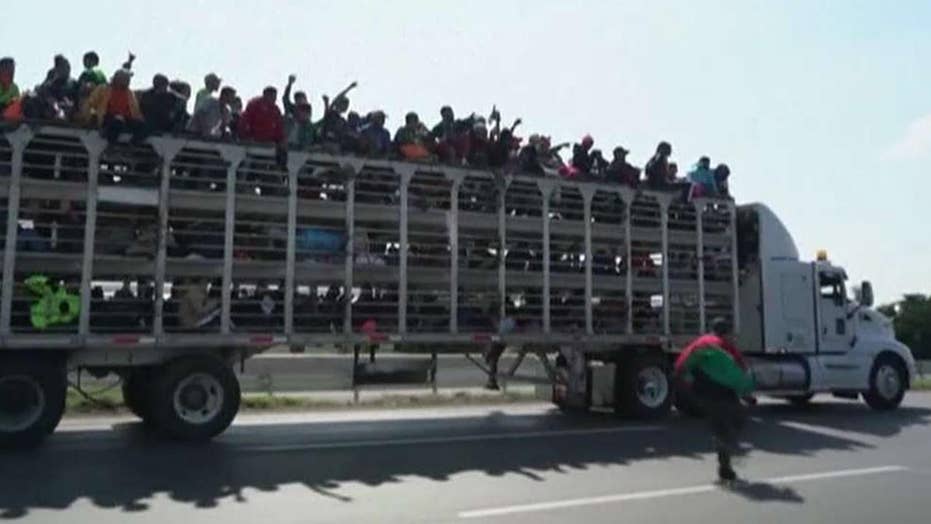 How prepared is US law enforcement for the migrant caravan?

One month ago today, 1,000 people started walking from Northern Honduras, beginning a journey they hoped would end with a job in the United States.

Today, they are about halfway to Tijuana, Mexico, where many will apply for asylum or pay a smuggler to get them over the border to Houston or San Jose or Omaha, Nebraska.

They’ve endured heat, humidity, wind, rain and cold during these 1,400 miles — and, more threatening to their goals, an American president insistent on border integrity and national security.

LGBT MEMBERS OF MIGRANT CARAVAN REACH US BORDER, SAY THEY ENDURED VERBAL ABUSE BY OTHER MIGRANTS

Their numbers have swelled to 11,500 including several subsequent caravans days behind, according to Mexican media reports.

The lead caravan is resting in the Benito Juarez Auditorium in Guadalajara on Wednesday, Mexico’s second largest city, home to 1.5 million people. They’re awaiting instructions on where they will go Thursday. It’s part of an almost-daily routine of walking, hitchhiking, arriving at a town or city 150 miles away, then waiting for the open borders group Pueblo Sin Fronteras to tell them where they are going the following day. 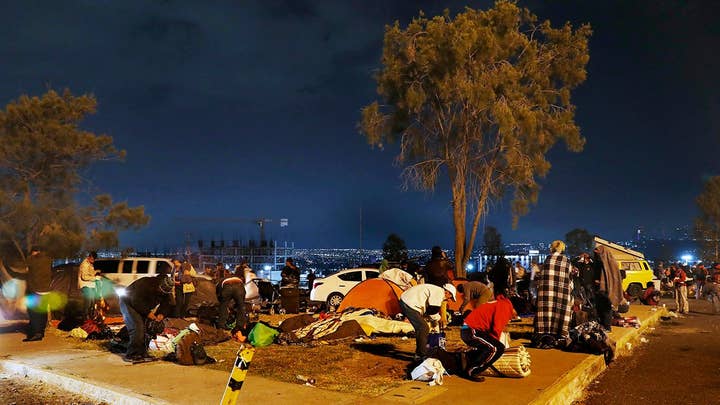 Olvin Antonio, 27, has been walking 28 days, starting in the Santa Barbara state in Honduras. He started the journey alone, but like most in the caravan, found travel partners he can trust. Most migrants will tell you there are bad people traveling alongside them that they avoid.

Sleeping outside in the cold of central Mexico has been tough, he said Monday while hitchhiking along a busy street in Irapuato.

“But we are in God’s hands, so there is no problem,” he said.

Antonio hopes to get to the U.S., but hasn’t thought much about how he’ll get there. He knows he’s going to Tijuana with the caravan. He also knows he’s a long shot for legal status in America, so he’ll also consider staying in Mexico.

Many are settling in Mexico. According to the Mexican government, 3,230 people have applied to stay where they can make more money than in Central America. Still, a job in the United States is the prize — the minimum wage is just a few dollars a day in Mexico, and they can make $15 or $20 in one hour working in Seattle or in farm fields in Washington state or California or the Midwest.

In Guadalajara, the caravan is 1,400 miles from Tijuana, a city at the border south of San Diego. Members of the caravan voted in Mexico City last week to take the longer, and much safer, route west, instead of the roads to Texas, a much shorter journey that takes them closer to Houston and Florida and other destinations in the Eastern United States.

Immigrants fear cartels and kidnappings in the northern Mexican states.

Once a slow walk through oppressive heat and humidity in southern Mexico, immigrants have learned to hitch rides to ease the journey. Hundreds wait at toll plazas along highways to jump on trucks heading the right direction. As migrants walk less, first aid tents at shelters are treating fewer blistered and bloody feet.

Mexican citizens have pitched in, tossing water and fruit to migrants as they pass through small towns. One bus company in Irapuato offered migrants 50 percent off the three-hour ride to Guadalajara.

Jose Machado wants to get to Tennessee, where he lived 14 years before being deported to Guatemala. 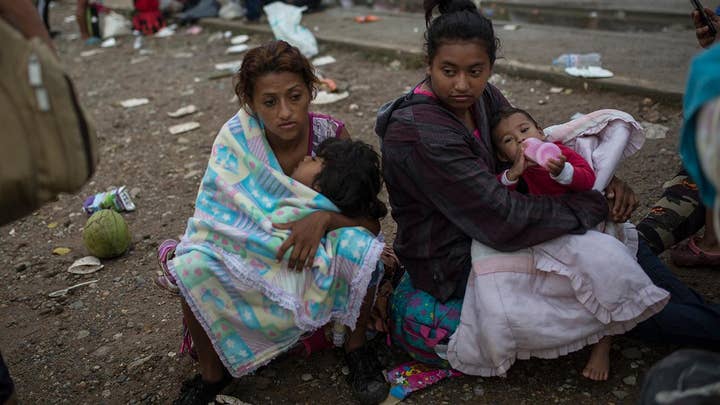 While in Memphis, he worked on sprinkler and irrigation systems, he said. He has two children, ages 14 and 3, that he misses.

He started walking Oct. 20. After being deported for what he said was a minor traffic infraction, he bought a farm but was harassed by the local gang. He said he could not go to the police because they were on the take. He will seek asylum in the U.S.

He carries a backpack with only the essentials — birth certificate, blanket, mattress pad, cellphone, toilet paper, flip flops and cologne.

“I still try to get a lady,” he said Monday, smiling.

MIGRANT CARAVANS SWELL TO 12,000, GET SOME HELP ALONG THE WAY

Migrants are generally aware they’ve become part of the political debate in the U.S., but don’t consume much U.S. media.

President Donald Trump has said the caravan includes criminals, something the migrants themselves say is true. The U.S. Dept. of Homeland Security said November 1 that 270 people in the caravan have criminal histories.

Homeland Security Secretary Nielsen says there is intelligence the caravans include a limited number of individuals from outside the region and warned that the most vulnerable are pushed ahead to frustrate the military. Catherine Herridge has the exclusive interview for 'Special Report.'

The Mexican ambassador to the U.S., Geronimo Gutierrez, told National Public Radio last month some of the migrants have been “very violent to authority” after they broke through a gate and clashed with police at the border between Guatemala and Mexico.

But those in the caravan insist they are mostly economic refugees who wish to enter the U.S. legally through the asylum process.

“Our plan is to keep with the caravan, go to the U.S. and have a better life,” said Jorge Gomez, a 14-year-old from Guatemala who is traveling with his father and dreams of going to college and becoming an engineer. “I want the chance to have a good family and be welcomed.”