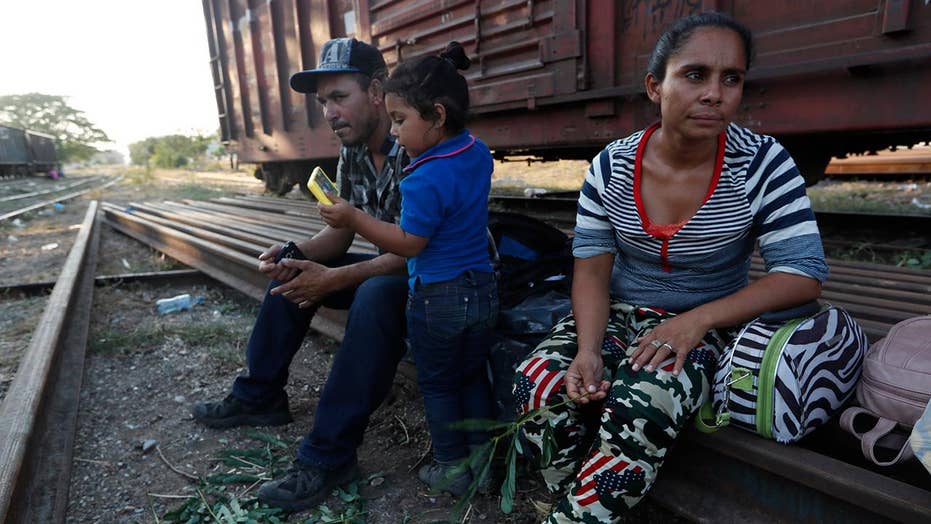 Fox News' Griff Jenkins reports from inside the migrant caravan in Tapachula, Mexico.

TAPACHULA, Mexico – Last October, when the first major caravan of mostly Central American migrants rushed Mexico’s southern border and made its way to Tijuana, officials here said it was the beginning of what has become a constant flow of unprecedentedly large migrant groups bound for the U.S.

Now, after six months of what Mexico’s Interior Secretary Olga Cordero calls a “phenomenon,” it appears the message of success in getting across and released quickly in America – has gone global.

Here, at the main shelter in Tapachula, just 25 miles north of Mexico’s Guatemala border, there are migrants we identified from more than 10 countries – Cuba, Haiti, Cameroon, Angola, Togo, India, Bangladesh, Congo and Guinea. They join migrants from Honduras, Guatemala, El Salvador and Nicaragua.

He said his journey started from Cameroon to Nigeria to Colombia. He walked through the jungle on foot in Panama to Costa Rica to Nicaragua and then to Honduras, Guatemala and into Mexico.

BORDER PATROL UNION CHIEF BLASTS CONGRESS OVER MIGRANT CARAVANS: 'WHAT ARE YOU DOING ABOUT IT?'

“I’m coming to the U.S. because I have a political crisis in my country,” Seidu said. “There is too much killing, assassination in my country.”

Mexican officials said their hope now is to keep migrants in the southern states, particularly in Chiapas. They have been cracking down further by detaining them here, but there are signs that is not going well.

Last week, more than 1,300 migrants escaped this shelter – most of them Cubans. Of those who escaped, about 600 remain on the loose.

Unsanitary conditions inside a shelter housing migrants trying to make their way through Mexico to the United States. The migrant caravan is attracting not just Central Americans but refugees from Africa, Asia and the Caribbean.

Officials estimate more than 5,000 migrants are currently in the southern state of Chiapas.

But unlike past caravans, this highly diverse and loosely organized group of migrants are mostly stalled here – with no expectation of an arrival date for them along the U.S. border.