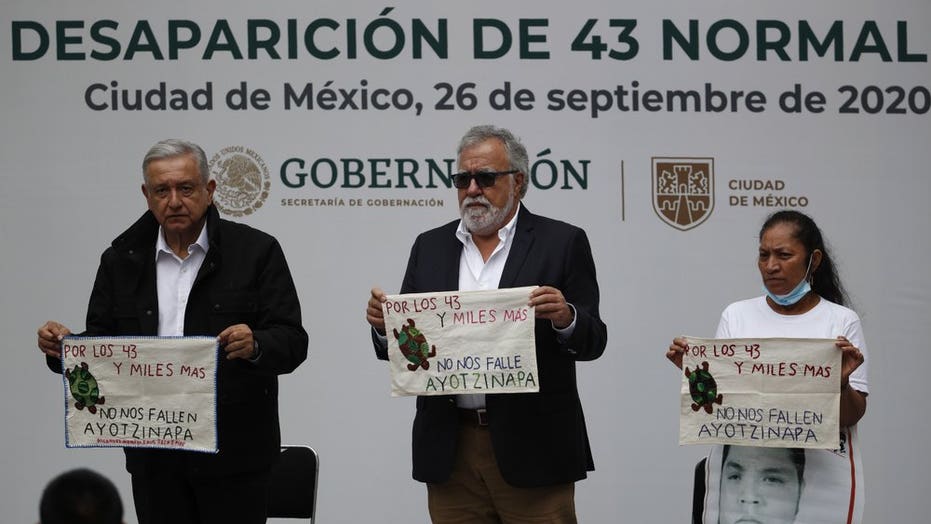 Mexico issued 25 warrants for individuals allegedly involved in the abduction of 43 students in southern Mexico in 2014, including for the first time members of the military and federal police.

Omar Gomez Trejo, the prosecutor leading the case, announced the slate of warrants during a press conference on the sixth anniversary of the students’ kidnapping.

The warrants have been issued for persons who are the alleged “the intellectual and material authors of the disappearance,” including current and former officials from the prosecutor’s office, organized crime, federal police, and members of the army.

Mexico's President Andres Manuel Lopez Obrador, left, and Deputy Interior Secretary Alejandro Encinas, center, stand with Maria Martinez, mother of Miguel Angel Hernandez Martinez, as they hold cloths embroidered by mothers of some of 43 missing students from the Rural Normal School of Ayotzinapa, with a message reading in Spanish; "For the 43 and thousands of others, don't fail us, Ayotzinapa," following a presentation on the ongoing investigation on the sixth anniversary of the students enforced disappearance, at the National Palace in Mexico City, Saturday, Sept. 26, 2020.(AP Photo/Rebecca Blackwell)

“Arrest orders have been issued for soldiers that will be carried out,” President Andrés Manuel López Obrador said. “He who has participated and is shown to have done so is going to be judged, that is an advance, there will be no cover-up.”

The prosecutor’s office did not clarify whether or not its former chief, Jesus Murillo Karam, was included on the list – a man that current Attorney General Alejandro Gertz Manero accused of “orchestrating a massive media trick.”

Students from the Ayotzinapa Rural Teachers’ College disappeared on September 26, 2014, in the state of Guerrero. The remains of only two of the students have been positively identified so far, Reuters reported.

Accounts collected by the Interdisciplinary Group of Independent Experts (GIEI) indicate that the students had gathered in Iguala to commandeer more intercity buses for use to travel for rallies and protests, Al Jazeera reported. After obtaining the buses, the students were stopped by multiple security forces along the road.

The alleged kidnapping occurred near a large army base, and independent investigations showed members of the military were aware of what was occurring.

FROM BOMB-AFFIXED DRONES TO NARCO TANKS AND VENTILATED TUNNELS: HOW WELL-EQUIPPED ARE THE MEXICAN CARTELS?

The motive for the kidnapping remains a subject of debate, but Gertz Manero said on Saturday that “the missing youths were victims who ended up in the middle of a battle of interests between drug trafficking forces.”

Gertz Manero added that “nearly 80 people were massacred and hidden in Iguala by the different criminal groups and their official accomplices.” He said he considers that a “generalized cover-up” has been established.

The students’ families have long demanded that soldiers be included in the investigation, but López Obrador’s coziness with the armed forces previously made it a difficult step to take.