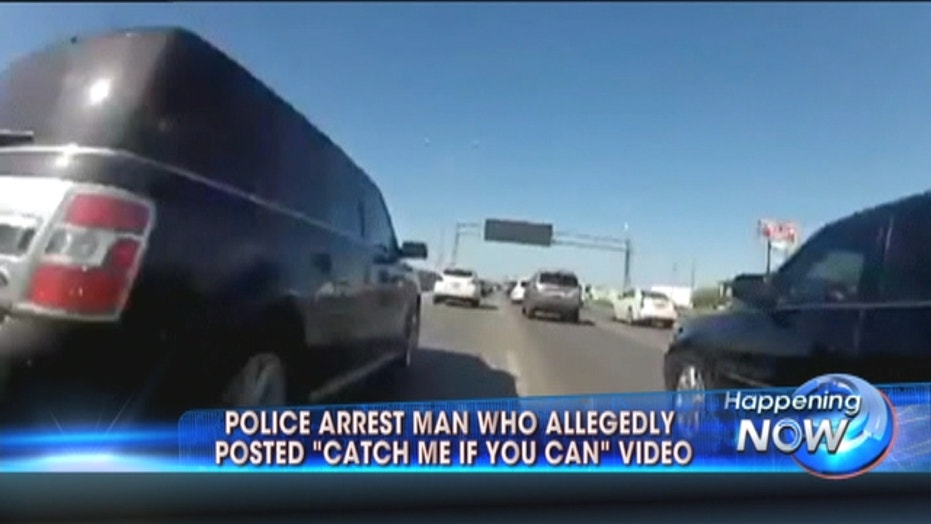 'Catch Me If You Can' Bike Rider Arrested By Police

A motorcycle rider who posted on Facebook a video showing him speeding through traffic at more than 100 mph, which he titled “Catch Me If You Can,” has been caught by police.

A rogue motorcyclist who dared law enforcement to bring him to justice by posting a helmet-cam video on Facebook entitled “Catch Me If You Can” that shows him speeding down a busy Texas interstate has, in fact, been caught.

Alex Rodriguez, 26, was arrested earlier this week after officers with the REACT Auto Theft Task Force, consisting of police officers and sheriff's deputies, responded to a tip about a stolen motorcycle. Rodriguez was wanted on two outstanding felony warrants and a misdemeanor assault warrant, and could face charges in connection to the stolen vehicle.

Rodriguez’s clip – showing him barreling down Interstate 35 in San Antonio at high speeds in heavy traffic and splitting lanes – was shared more than 10,000 times since being posted in May 2013 and was picked up by a number of media outlets.

San Antonio police began searching for the thrill seeker back in February when somebody posted a link to Rodriguez’s video on the law enforcement agency’s Facebook page.

San Antonio Police Chief William McManus told Fox News last week that the clip was "one of the most insanely dangerous things that I have ever seen."

“He brought this on himself,” McManus said. “He brought attention to himself.”

When police showed up to arrest him, Rodriguez tried to escape out the back door of his home but wasn’t as fast on foot as he was on his stolen motorcycle. The stolen bike was not the same one featured in the video posted online.

“He wanted attention, obviously, by posting this video to Facebook,” Sgt. Javier Salazar, an SAPD spokesman, told the San Antonio Express-News. “He's got some now. I don't know if it's the kind he wanted.”