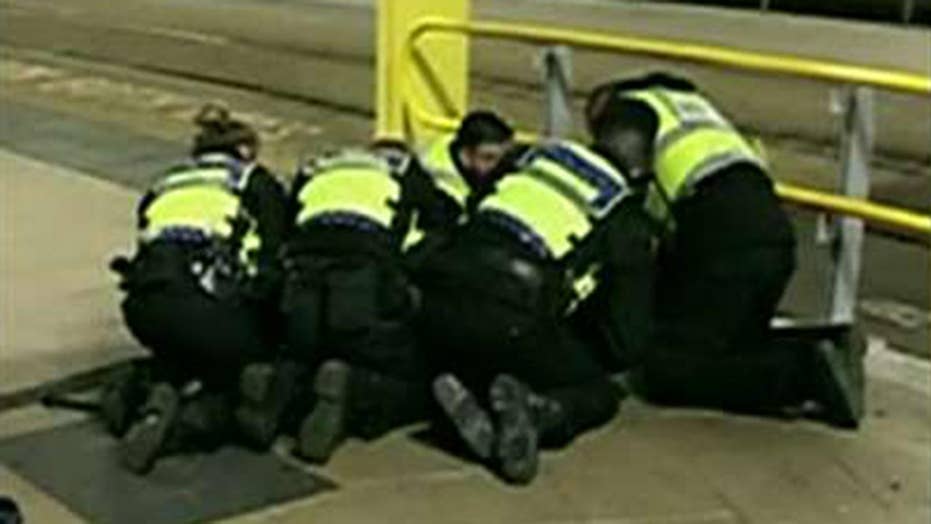 Terror investigation under way in UK after Manchester stabbing spree

The New Year’s Eve stabbing of three people, including a police officer, at Victoria Station in Manchester, U.K., is being treated as a terrorist incident, police said.

Greater Manchester Chief Constable Ian Hopkins said Tuesday two people suffered very serious injuries in the attack. A woman in her 50s was taken to a local hospital with injuries to her face and abdomen, police said. A man, also in his 50s, suffered injuries to his abdomen.

A police sergeant who was stabbed in the shoulder has been released from the hospital.

Hopkins said the police investigation is continuing. He praised the “bravery” of four police officers who subdued the suspect at the train station. The suspect has been arrested but not yet charged or identified. Sky News reported the suspect was a 25-year-old man.

An eyewitness said he was chanting Islamic slogans during the stabbings.

Two knives were recovered at the scene and a residence in Cheetham Hill was being searched, the BBC reported. The train station has been reopened following the stabbings.

British Prime Minister Theresa May tweeted her condolences to those affected by the attack.

“My thoughts are with those who were injured in the suspected terrorist attack in Manchester last night,” she tweeted. “I thank the emergency services for their courageous response.”

Sam Clack, a producer who works for the BBC, was on the platform when the attack occurred. He described the attack before police arrived at the scene.

"I just heard this most blood-curdling scream and looked down the platform,” he said. "What it looked like was a guy in his 60s with a woman of similar age and another guy all dressed in black. It looked like they were having a fight, but she was screaming in this blood-curdling way. I saw police ... come towards him. He came towards me. I looked down and saw he had a kitchen knife with a black handle with a good, 12-inch blade. It was just fear, pure fear."

Victoria Station is steps away from the Manchester Arena, where 22 people were killed when a suicide bomber blew himself up as fans were leaving an Ariana Grande concert. Britain's official threat level has long been set at "severe," indicating that intelligence analysts believe an attack is highly likely.