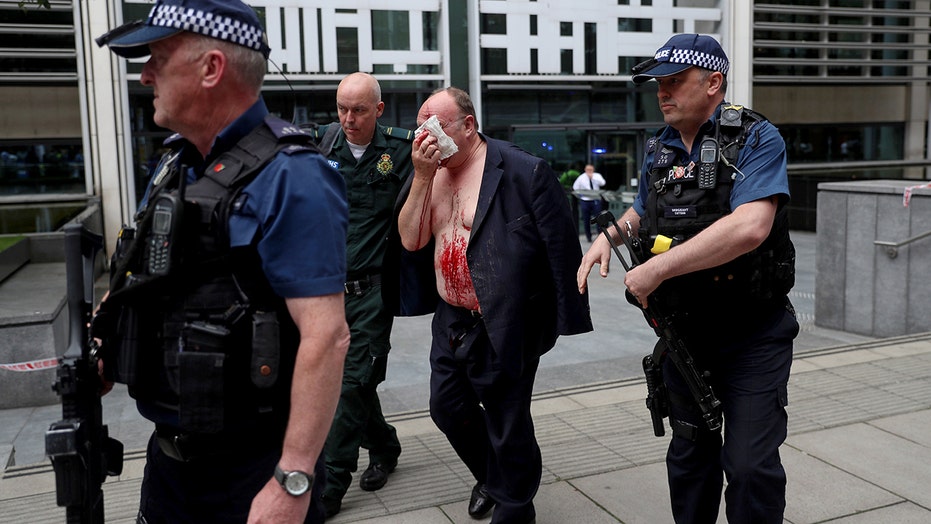 A man is recovering from his injuries Thursday after being stabbed in the face outside Britain's Home Office, officials said.

The unidentified victim was pictured shirtless and covered in blood being led by armed police away from the Peel Building in Westminster, central London, around half a mile from the Houses of Parliament.

An injured man is helped by a medic and police officers outside the Home Office in London, Britain August 15, 2019. (Reuters)

Priti Patel, the home secretary, said on Twitter: "All my thoughts are with the victim and their family following horrific unprovoked knife attack on Marsham Street."

The suspect was arrested on suspicion of grievous bodily harm, according to the Metropolitan Police. The victim's injuries are not being considered as life-threatening.

The incident comes just a day after the Home Office, which deals with crime, security and immigration in the U.K., was criticized for launching a new campaign which aimed to discourage knife crime with messages on boxes of fried chicken.

More than 321,000 chicken boxes featuring the #knifefree campaign have been distributed “to tackle the senseless violence that is traumatizing communities and claiming too many young lives,” according to Kit Malthouse, the policing minister.

But critics, including David Lammy, a member of parliament for the opposition Labour party, lambasted the campaign as racist.

He told The Guardian: “The Home Office is using taxpayers’ money to sponsor an age-old trope. [Prime Minister] Boris Johnson has already called black people ‘piccaninnies with watermelon smiles.’ Now his government is pushing the stereotype that black people love fried chicken. This ridiculous stunt is either explicitly racist or, at best, unfathomably stupid.”

Shadow Home Secretary Diane Abbot tweeted: “Instead of investing in a public health approach to violent crime, the Home Office have opted for yet another crude, offensive and probably expensive campaign. They would do better to invest in our communities not demonize them.”

The incident also comes a week after a London police officer conducting a routine traffic stop was stabbed several times, including in the head, by a machete, in Leyton, east London.

The United Kingdom is facing an epidemic of knife crime. Data released by the Office for National Statistics (ONS) in June showed that there were 43,516 police-recorded offenses involving a knife or sharp instrument in 2018-19, the highest figure since such records began in 2011 and an 8 percent increase from the previous year.