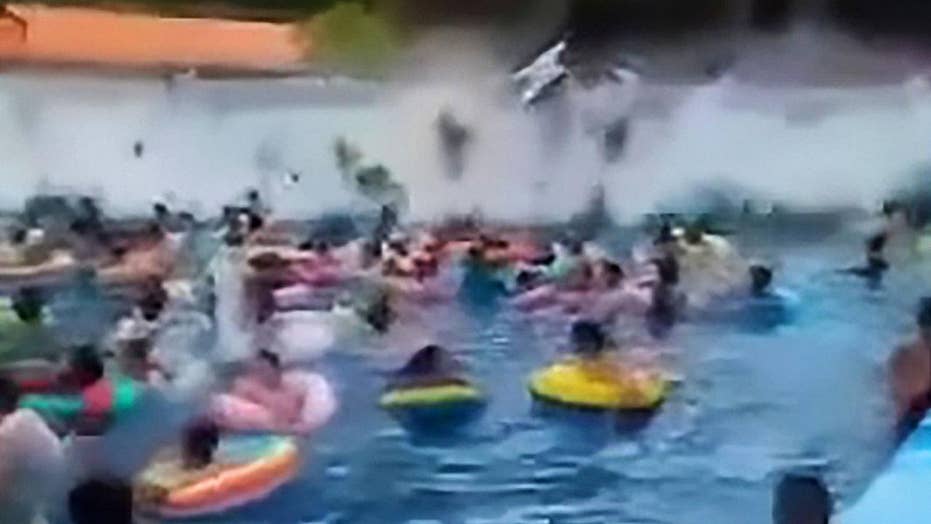 Instead of a gentle wave, the machine for a "tsunami pool" at Shuiyun Water Park in Longjing, China, generated one that hurtled swimmers into each other and out of the pool.

BOY, 3, FALLS 6 STORIES IN CHINA FROM APARTMENT BALCONY, SAVED BY ONLOOKERS WITH BLANKET

Video of the incident shows swimmers enjoying themselves in the wave pool before suddenly being confronted by the "tsunami."

'LOVE MOTHER' IN CHINA WHO ADOPTED OVER 100 CHILDREN JAILED FOR FRAUD, GANG-RELATED CRIMES

Five people were still being treated at area hospitals midweek, some with fractured ribs.

This viral video seen over two million times shows dozens of wave pool swimmers being swept away by a giant 10-foot ‘tsunami’ created by a faulty wave machine. (AsiaWire)

A spokesman for the park blamed the freak wave on a "mechanical fault," adding that the attraction was closed for a day for repairs and will be open again Friday. He added that just 10 people had been hurt, contradicting the higher number given by officials.

“Online rumors say that a worker wrongly operated the controls, but in reality, it was a problem with the equipment,” the employee was quoted as saying.

“The park closed for a day for repairs, but the investigation is over and the park will open as usual tomorrow.”

The water park is closed pending an investigation, The Washington Post reported.