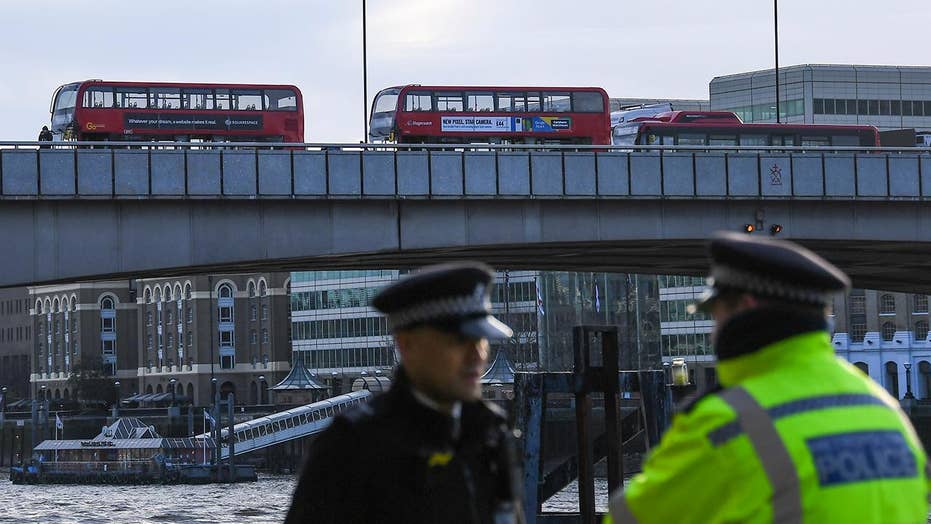 An Islamist ex-con and one-time associate of the terrorist who carried out Friday's deadly London Bridge attack was reportedly back in custody Monday as part of the United Kingdom's crackdown on scores of extremists given early release from prison.

Nazam Hussain, 34, was arrested in Stoke-on-Trent as part of the ongoing review of terrorists permitted to leave prison early, Sky News reported Monday.

The station says Hussain, following a search of his home, was being held on suspicion of preparation of terrorist acts. A West Midlands Police spokesman told Sky News though that Hussain was not connected with any "immediate risk to public safety" and his arrest was unrelated to Friday’s stabbings.

The London Bridge stabber is surrounded by police following the attack on Friday. (AP/HLOblog)

Hussain, who was convicted of terrorist offenses in 2012, was released early from prison alongside London Bridge attacker Usman Khan last December.

Both men were close friends while growing up in Stoke-on-Trent and had plotted to bomb the London Stock Exchange and other targets in 2010, according to The Telegraph. They also were planning to travel to a Pakistan-controlled part of the Kashmir region in 2011 to establish a terrorist training camp for Islamic extremists, the outlet added.

Khan was shot and killed Friday after stabbing two people to death on London Bridge and injuring three others.

"I opposed [automatic release] both in 2003 and 2008, and now that I am prime minister I'm going to take steps to make sure that people are not released early when they commit... serious sexual, violent or terrorist offenses," he told the BBC. "I absolutely deplore that fact that this man was out on the streets... and we are going to take action against it."