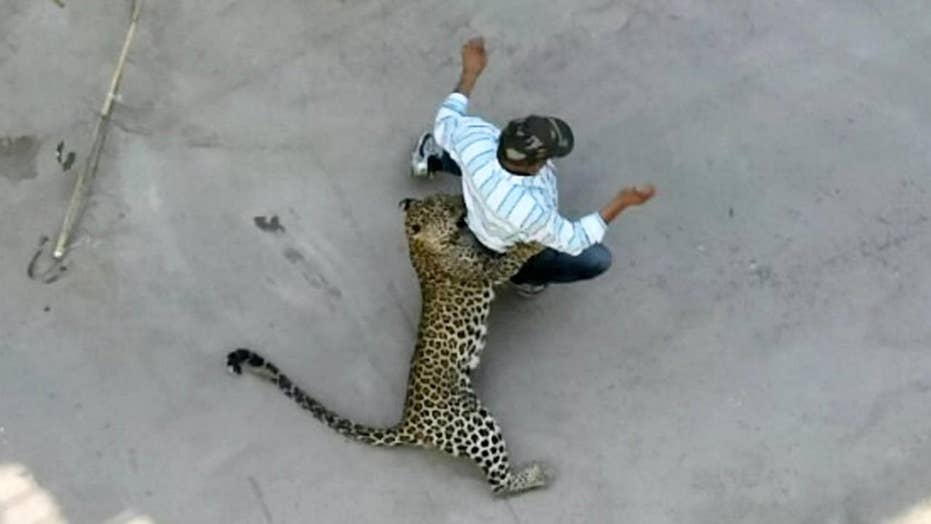 Chaos erupted in west-central India when a leopard entered a Palher Nagar compound and attacked some residents. Watch as people arm themselves with sticks to try and scare off the big cat.

The headless body of a 3-year-old Indian boy was found Tuesday after the child was snatched from his home and dragged into the woods by a serial-killer leopard, officials said.

The child, identified as Wasim Akram, was at home with his mother when the animal snuck inside, pounced on him and dragged him away, local officials told Agence France-Presse.

The child's headless body was handed over to his parents after the grisly discovery was made.

The killing was the third blamed on the same leopard in the last two months. One of the other victims was an 8-year-old boy, who was mauled to death on Dec. 7, according to the news agency.

The killing of the three-year-old boy was the third blamed on the same leopard in the last two months.

Wildlife officials equipped with tranquilizer guns have been searching the area for the leopard, while local officials in the northern state of Jammu and Kashmir have called for "elimination orders" from the state government.

"The leopard was spotted this morning but we could not trap it," Jammu regional wildlife warden Tahir Ahmad Shawl told AFP.

There are between 12,000 and 14,000 leopards in India, and an estimated 431 were killed in the last year. As development pushes into forested areas, there have been more encounters with humans.

Last week, a Buddhist monk was killed by a leopard while meditating in a forest in the western state of Maharashtra. It was the fifth such attack in the area this month, according to AFP.

Experts told the news agency while there are no exact figures on the number of humans killed every year, it is thought to be in the hundreds.