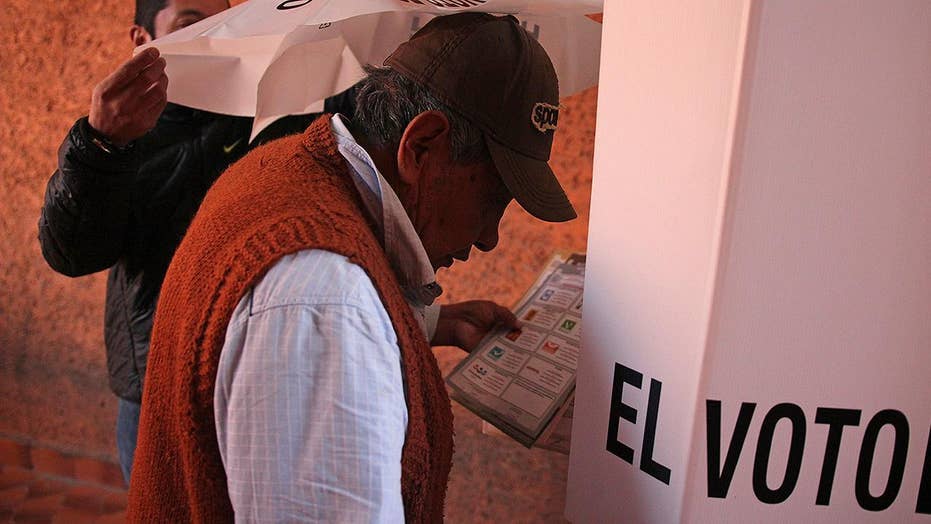 A left-wing populist who has railed against President Trump's immigration policies in no uncertain terms appeared to have won a comprehensive victory in Mexico's presidential election Sunday night, with both of his main rivals conceding before the first official results were announced.

In a televised speech, Anaya acknowledged that "the trend favors Andres Manuel Lopez Obrador" and said, "I recognize his triumph."

"For the good of Mexico, I wish him the greatest success," Meade said.

Other exit polls projected that Lopez Obrador's left-wing Morena party would win governorships in the states of Chiapas, Morelos, Tabasco and Veracruz, as well as the race for head of government in Mexico City. The party was founded less than a decade ago.

Election officials were expected to announce preliminary results later Sunday night. Those numbers will be based on a so-called "quick count" of ballots from approximately 5 percent of the more than 156,000 polling stations in Mexico. The official results will not be announced until later in the week.

Lopez Obrador, know popularly by the acronym "AMLO," has long been the consensus front-runner in the race, having promised a "transformation" of a country plagued by violence and political scandal. After suffering defeats in the 2006 and 2012 presidential races, the former Mexico City mayor appeared to have won over the electorate.

Lopez Obrador has presented himself as a champion of poor and rural Mexicans who would root out corruption, give scholarships or paid apprenticeships to youth, and increase support payments for the elderly. He's also promised to grant amnesties to some criminals amid a wave of violence that's the bloodiest seen in at least two decades -- and to take a reduced presidential salary.

His opponents have warned he could set Mexico back decades with an interventionist economic policy that has led previous opponents to compare him to the late Venezuelan dictator Hugo Chavez.

But while Lopez Obrador has railed against Mexico's "mafia of power," he's saved some of his strongest words for Trump. He launched his presidential campaign in the border city of Ciudad Juarez and vowed that Mexico would reassert itself as a "free, sovereign and independent" nation. He returned to that theme Wednesday in his closing rally at the massive Estadio Azteca in Mexico City, vowing that Mexico "will never be the piñata of any foreign government."

In between, Lopez Obrador has ripped the Trump administration's policy of separating families who cross the border illegally as "arrogant, racist and inhuman." He's also vowed to roll back some of outgoing President Enrique Pena Nieto's policies toward Central American migrants who cross Mexico's own southern border, saying that his government would no longer do Trump's "dirty work."

All four presidential contenders had lambasted Trump's policies and rhetoric toward migrants and Mexico, but backlash also has landed heavily on Pena Nieto, whom critics say has not pushed back hard enough against the American president on trade, migration and the proposed border wall.

The government of the northern state of Chihuahua reported that three people were arrested in Ciudad Juarez for allegedly trying to buy votes for an unnamed political party.

And in Michoacan state, polling places in a few villages were cancelled after some inhabitants said they didn't want elections involving political parties, which they mistrust. Some ballots were stolen and burned in the town of Nahuatzen to prevent voting.

The Mexico City government reported isolated problems such as polls opening late, 17 stations that ran out of ballots and the robbery of 583 ballots that were headed to a station in the borough of Iztapalapa.

Fox News' Melissa Chrise and The Associated Press contributed to this report.