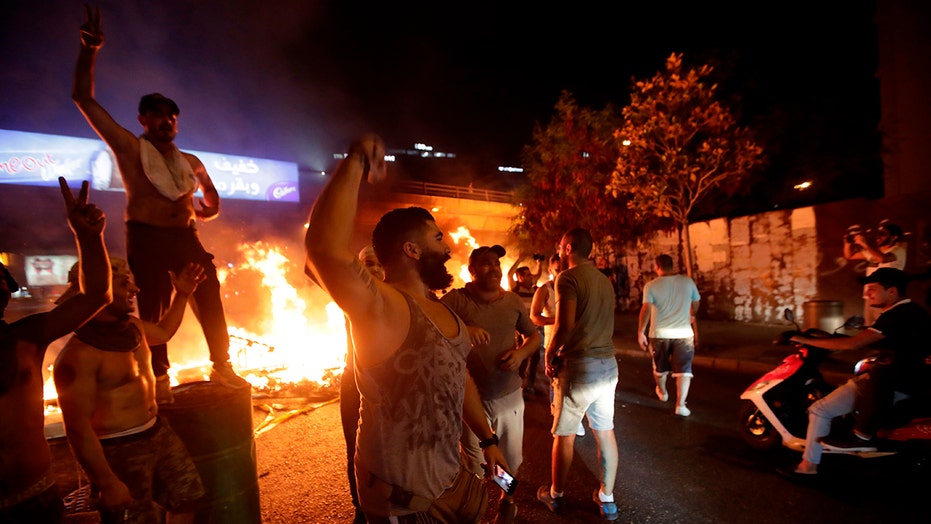 Hundreds took to the streets of Lebanon on Thursday to protest the cash-strapped government’s plan to tax calls made on messaging applications such as WhatsApp.

Dozens of protesters marched near the government headquarters in Beirut, where large numbers of riot police were deployed. Throughout the country, protesters chanted the popular slogan of the Arab Spring protests -- “The people demand the fall of the regime," AFP reported.

Lebanese demonstrators chant slogans as a fire burns during a protest against recent tax calls on Thursday in Beirut. (Anwar Amro/AFP via Getty Images)

Information Minister Jamal al-Jarrah said Thursday that the cabinet had agreed to charge 20 cents per day for calls made with the Voice Over Internet Protocol (VoIP), used by applications including Facebook-owned WhatsApp and FaceTime, according to AFP.

The tax is to take effect in January.

HUNGARY WILL USE FORCE IF TURKEY 'OPENS THE GATES' TO REFUGEES, PM VIKTOR ORBAN SAYS

Prime Minister Saad al-Hariri said in a statement the new tax was expected to generate around $200 million in revenue per year. The country already has some of the highest mobile costs in the region, as there are only two service providers, both state-owned.

A Lebanese demonstrator walks past burning tires during the tax protest in a Beirut suburb.  (Anwar Amro/AFP via Getty Images)

On Wednesday, the government approved tax hikes on tobacco products as well.

The digital rights group Tech Geek 365 said on Twitter that the decision would be a direct violation of WhatsApp’s terms of service. The terms of service prohibit anyone from trying to “sell, resell, rent or charge for our services.”

VENEZUELA WINS SEAT ON HUMAN RIGHTS COUNCIL, US BRANDS IT AN 'EMBARASSMENT'

Public anger has stirred in Lebanon since July, when Parliament passed austerity measures aimed at reining in the country’s burgeoning deficit.

Lebanon has one of the world’s highest debt burdens, in terms of ratio of debt to GDP, gross domestic product. In the face of strains on its financial system, low growth and crumbling infrastructure, the government declared a state of “economic emergency.” Lebanon, until 2017, had gone 12 years without a yearly fiscal budget.

The government is assessing a number of other measures as it crafts its 2020 budget in hopes of rescuing the country’s economy and securing the $11 billion in aid international donors promised to the country last year, according to Reuters.

Lebanon, which had been embroiled in neighboring Syria’s civil war for seven years and hosted more than a million Syrian refugees, was granted $10.2 billion in loans and $860 million in grants by donors who wanted to see the nation committed to long-stalled reforms.