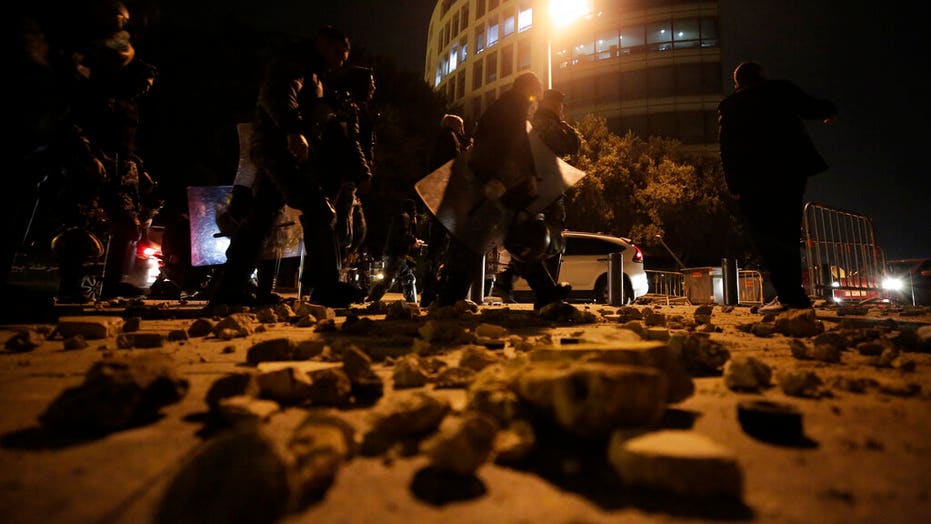 Lebanese security forces prepared for more violence on Sunday after a night of protests over the country’s worsening financial situation gripped Lebanon’s capital.

Demonstrators used rocks and other projectiles early Sunday while security forces responded by firing tear gas canisters and water cannons, before turning to rubber bullets. A few protesters tried to breach metal barriers that separated them from the riot police, while hundreds more gathered down the blocked street leading to the Parliament building.

At least 70 people were injured in the first 90 minutes of the clashes, including 30 transported to hospitals for treatment, according to the Red Cross. Reporters on the scene said most of the injured were from rubber bullets.

Saturday's clashes left nearly 400 people injured, according to the Red Cross and the Lebanese Civil Defense. Lebanon's Internal Security Forces said 142 of its members were injured, some with serious concussions.

Lebanon's military made a show of force on Sunday, heavily deploying in downtown Beirut and patrolling ahead of the rallies. Riot police were in the front line guarding Parliament.

The clashes took place amid a rapidly worsening financial crisis and an ongoing impasse over the formation of a new government. The protests, which began in October, took a violent turn this week as popular frustration began to rise.

Demonstrators say the Lebanese political elite has ignored their calls for forming an independent government to tackle the deepening crisis. The protesters blame politicians for widespread corruption and mismanagement.

Panic and anger have gripped the public as their local currency plummeted, losing more than 60 percent of its value in recent weeks. The economy has seen no growth and foreign inflows dried up in the already heavily indebted country that relies on imports.

Security forces and the military had prepared for more violence Sunday, blocking access to some buildings in central Beirut with razor wire, and closing off access to areas that included a popular tourist site. Workers also welded fencing together across roadways that lead to Parliament to make it harder for demonstrators to push through.

Earlier in Beirut on Sunday, shopkeepers, banks and other businesses swept up broken glass and boarded-up windows. Workers at one bank took down the large sign with its name to remove any identifier and avoid soliciting anger from protesters, who smashed the windows and the facade of Lebanon's Banking Association headquarters with metal bars on Saturday. The demonstrators widely blame Lebanese financial institutions, alongside government corruption, for the crippling economic crisis.