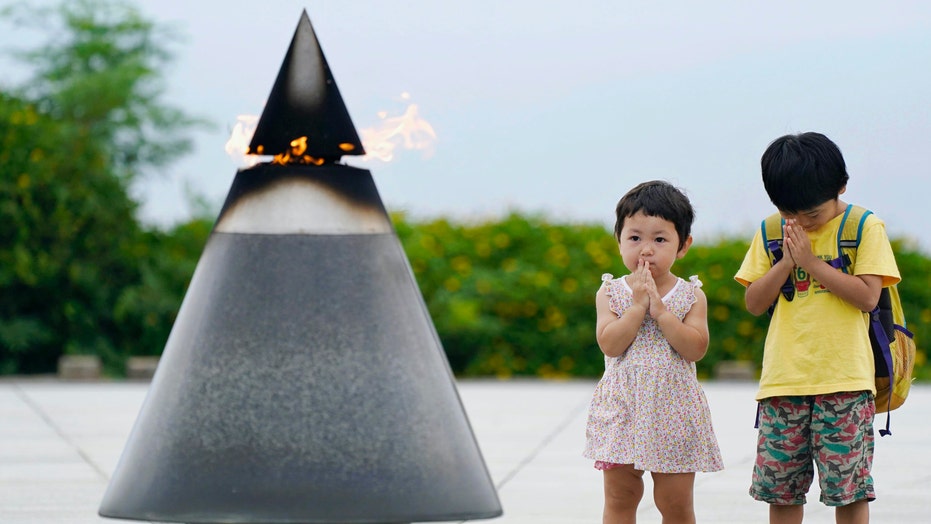 Okinawa residents prayed for peace and remembered lost loved ones Tuesday as they marked the 75th anniversary of the end of one of WWII's deadliest battles, the Battle of Okinawa.

At the ceremony held on the Japanese island to honor the more than 200,000 who died in the fighting near the war's end, Okinawa Gov. Denny Tamaki said accounts of the tragedy must be remembered accurately and handed down to younger generations.

A man cries as he visits "Cornerstone of Peace" monument walls on which the names of all those who lost their lives, both civilians and military of all nationalities in the Battle of Okinawa are engraved, at the Peace Memorial Park in Itoman, Okinawa, Japan, Tuesday, June 23, 2020. (Kyodo News via AP)

“We must gather our wisdom and push forward to achieve nuclear weapons ban, war renouncement, and lasting peace,” Tamaki said.

ON SAD ANNIVERSARY, FEW TO MOURN THE D-DAY DEAD IN NORMANDY

Okinawa was Japan’s only home battleground in WWII, and the island remained under U.S. occupation for 20 years longer than the rest of Japan, until 1972.

Resentment over a continued heavy presence of U.S. troops runs deep, with more than half of the roughly 50,000 U.S. troops in Japan based there under a bilateral security treaty.

Children pray in front of the "Peace of Fire" at the Peace Memorial Park in Itoman, Okinawa, Japan, Tuesday, June 23, 2020. (Koji Harada/Kyodo News via AP)

Many Okinawans believe the post-World War II Japan-U.S. security alliance was built on their sacrifices during the war and then after Japan’s 1945 surrender, when American troops confiscated Okinawan land for their bases.

Okinawa has asked the central government to do more to reduce the burden from numerous U.S. military facilities, but changes have come slowly. Many Okinawans also want a revision to the Status of Forces Agreement with the United States, which gives American military personnel certain legal privileges.

VETERAN OF D-DAY, OKINAWA RECALLS FIGHT WITH PTSD AS HE PREPARES TO TRAVEL BACK TO NORMANDY

Okinawan people find it unacceptable that their land is still occupied by a heavy U.S. military presence even 75 years after World War II. They have asked the central government to do more to reduce their burden, and Prime Minister Shinzo Abe's government repeatedly say it is mindful of their feelings, but the changes are slow to come. (Kyodo News via AP)

Okinawans have suffered from American base-related crime, pollution and noise over the 75 years since the end of the war, Tamaki said.

“Since the end of the war, even when Okinawa was deprived of human rights and self-governance under the U.S. occupation, we have steadily walked on the path of reconstruction and development while protecting our culture and the sincerity we inherited from our ancestors,” Tamaki said.

Added to friction over the American troops on the island are centuries-old tensions between Okinawa and the Japanese mainland, which annexed the islands, formerly the independent kingdom of the Ryukus, in 1879.

One major disagreement is over a decades-old plan to relocate a U.S. Marine Corps air station from the densely populated Futenma area in southern Okinawa to the less-crowded Henoko region on the east coast. Many Okinawans want the air station to be moved off the island entirely, and object to environmental damage caused by the construction of the new facility, which is already underway.

Members of a bereaved family pray in front of a "Cornerstone of Peace" monument wall on which the names of all those who lost their lives, both civilians and military of all nationalities in the Battle of Okinawa are engraved, at the Peace Memorial Park in Itoman, Okinawa, Japan, Tuesday, June 23, 2020. (Kyodo News via AP)

Tamaki renewed his pledge Tuesday to protect the environment at Henoko and block the relocation.

Tuesday's ceremony was significantly scaled down as part of efforts to prevent the spread of the new coronavirus. Prime Minister Shinzo Abe, speaking remotely from Tokyo, said the government would do its utmost to lighten Okinawa’s burden. He did not elaborate. Scenic Okinawa, ideally located as an Asian gateway, has “immeasurable” potential for future growth, he said, promising more government support.

Tuesday also marks the 60th anniversary of the enactment of the Japan-U.S. security treaty. While the alliance remains strong, President Trump has pushed Japan and South Korea both to increase their spending to reduce costs for the U.S. for its security presence in the region.

Foreign Minister Toshiitsu Motegi told reporters Tuesday in Tokyo that the Japan-U.S. alliance today is “stronger than ever and indispensable.” Japan wants to maintain close cooperation, he said, and will consider ways to do more to beef up its defense capabilities as a U.S. ally.