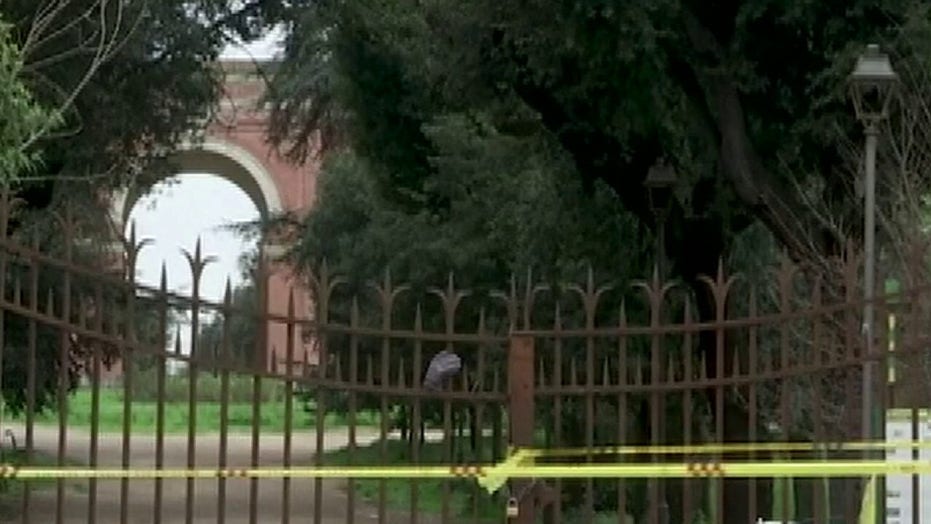 The number of coronavirus cases in Italy surged higher Sunday, with the nation described as the pandemic's epicenter in Europe recording over 3,500 cases in its largest single-day increase of infections to date.

“It’s not a wave. It’s a tsunami,” Dr. Roberto Rona, who has overseen intensive care at the Monza hospital in the Lombardy region, said of Europe’s largest outbreak.

People leaning out of their home's balconies in Milan to play and sing during a flash mob launched throughout Italy to bring people together and try to cope with the emergency of coronavirus. (Claudio Furlan/LaPresse via AP)

It is not known if Italy is reaching its peak and might start seeing the number of new cases decline, the nation’s national health institute chief, Silvio Brusaferro, said.

ITALIANS BREAK OUT IN SONG AMID CORONAVIRUS LOCKDOWN

The Italian government placed the entire country on lockdown last week to slow the outbreak’s spread. Schools, restaurants and cafes have been closed, while all public Masses were canceled. Citizens largely have remained indoors.

A man with a mask riding past the Colosseum in Rome on Sunday. (AP Photo/Alessandra Tarantino)

German Chancellor Angela Merkel last week opposed closing her county’s borders, saying it was “not an appropriate response” at the time. However, on Sunday, German officials announced they would partially close the borders with France, Switzerland, Austria, Luxembourg and Denmark.

Interior Minister Horst Seehofer said the new checks will take effect at 8 a.m. Monday, adding that people commuting across the border to work will still be able to leave and enter, as will goods. He also said German citizens in the neighboring countries will be allowed back in.

A man in a protective suit checking the body temperature of a man at a Polish border checkpoint on the Bridge of Friendship near Goerlitz, Germany, on Sunday. (Sebastian Kahnert/dpa via AP)

Spain’s health officials said deaths from the coronavirus have more than doubled in 24 hours, jumping to 288 on Sunday from 136 a day earlier. The nation had some 7,753 infections, up from 5,700 on Saturday, with around half of them concentrated in the capital city of Madrid.

The surge comes a day after Spain’s government declared a state of emergency and took extraordinary measures to limit movement to commuting to work and necessary errands. It also has closed restaurants, bars, most retail shops and reduced public transportation.

Infections from the COVID-19 virus had doubled in France in three days, reaching 4,500 infections and 91 deaths, officials said Sunday.

The government ordered all restaurants and bistros to close, although it went ahead with nationwide elections Sunday to choose mayors and local leaders. Officials told voters to bring their own pens.

Officials in Great Britain, which has not yet restricted everyday activities, said they planned to set out emergency powers this week, including potentially requiring people over 70 to self-isolate for up to four months and banning mass gatherings.

People standing outside The Quays Bar in Dublin, Ireland, on Sunday as pubs and clubs in Irish tourist hotspots closed with immediate effect amid coronavirus fears. (Aine McMahon/PA via AP)

After reporting a second virus death and 39 new cases, bringing its total to 129 on Saturday, Ireland ordered all pubs and bars to close for two weeks and urged people not to hold house parties instead.

Most people diagnosed with COVID-19 have recovered within weeks, according to the World Health Organization. In some patients, especially older adults and people with existing health problems, it could cause more severe illness, including pneumonia.