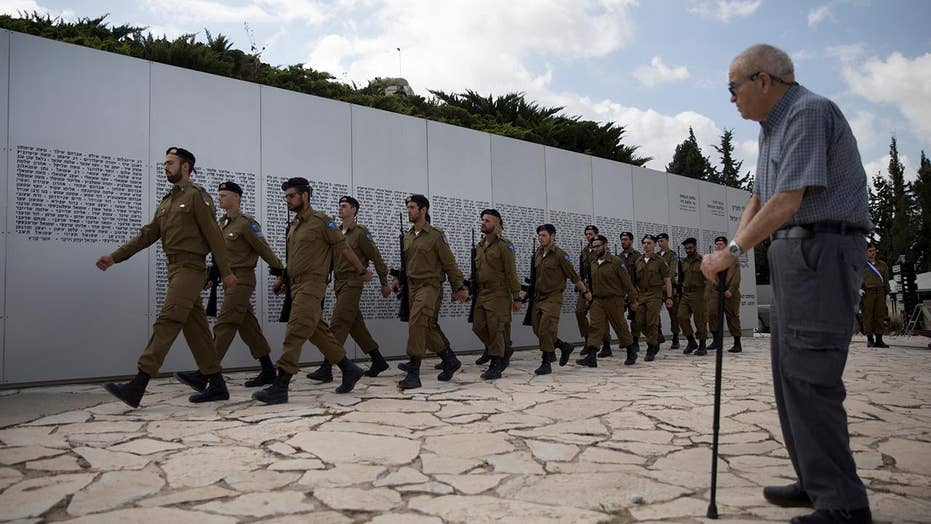 Israelis pause to remember the fallen soldiers and victims of terrorism who were honored on Israel's Memorial Day.

JERUSALEM -- The day started in Israel on a somber note.

Thousands across the country came to a stand-still to remember fallen soldiers and victims of terrorism who were honored on Israel's Memorial Day.

The sirens ringing out for two minutes as the clock hit 11 a.m., local time.

Students sit on a tank just before a ceremony marking the annual Memorial Day to remember fallen soldiers and victims of terror, at the Armored Corps memorial site in Latrun, Israel, Wednesday, May 8, 2019. (AP Photo/Oded Balilty)

Many froze in place and bowed their heads. Others stopped their vehicles and got out to show respect for those who have died.

The remembrance came just a few days after one of the most violent weekends between Israel and Gaza since the 2014 war.

Four Israelis and 27 Palestinians were killed during the latest escalation between both sides.

The current ceasefire that went into place on Monday morning is holding, but Prime Minister Benjamin Netanyahu shifted his attention on Wednesday to a different situation.

During a Memorial Day ceremony speech, Netanyahu focused on Iran's announcement that it plans to partially withdraw from its nuclear deal with world powers, amid pressure from the U.S.

"We will not allow Iran to obtain nuclear weapons," said Netanyahu. "We will continue to fight those who seek to take our lives and we will thrust our roots even deeper into the soil of our homeland."

At sunset on Wednesday, Israel shifted from mourning to celebrating its 71 Independence Day.

The day will be marked with fireworks, parties, concerts and a customary military jet flyover that crisscrosses the entire country.

Independence Day officially began at sundown on Wednesday and will last through Thursday.

Jeff Paul is a West Coast correspondent for FOX News Channel (FNC). He joined the network in March of 2018 and is based in the Los Angeles bureau.