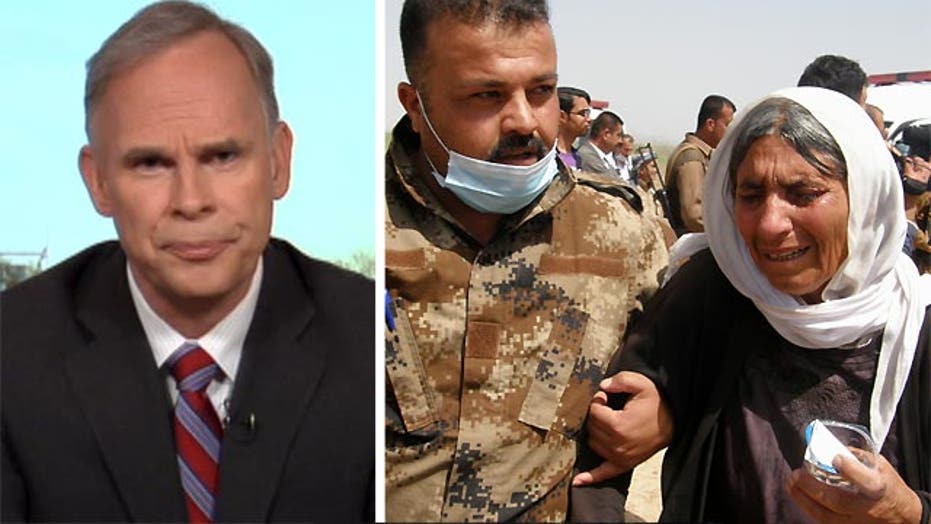 BAGHDAD – Clashes between Iraqi forces and Islamic State militants pressing their offensive for Ramadi, the capital of western Anbar province, has forced more than 2,000 families to flee from their homes in the area, an Iraqi official said Thursday.

The Sunni militants' push on Ramadi, launched Wednesday when the Islamic State group captured three villages on the city's eastern outskirts, has become the most significant threat so far to the provincial capital of Anbar.

It is seen as an attempt by ISIS to stage a counteroffensive after suffering a major blow earlier this month when Iraqi troops routed the group from Tikrit, Saddam Hussein's hometown.

Sattar Nowruz, from the Ministry of Migration and Displaced, said that the over 2,000 families that fled Ramadi were in a "difficult situation" and have settled in southern and western Baghdad suburbs.

Tents, food and other aid are being sent to them, he said. The ministry is also assessing the situation with the provincial government in order "to provide the displaced people, who are undergoing difficult conditions, with better services and help," Nowruz added.

On Thursday, sporadic clashes were still underway, according to security officials in Ramadi. The center of the city has been firmly in the hands of Baghdad government forces, though some of the far suburbs and outskirts had fallen to the Islamic State, which last year captured large swaths of territory in western and northern Iraq, along with about a third of neighboring Syria. That blitz stunned the Baghdad government and pushed the country into its worst crisis since the 2011 withdrawal of U.S. troops.

U.S.-led coalition airstrikes were backing the Iraqi troops in Ramadi on Thursday and were targeting the three villages — Sjariyah, Albu-Ghanim and Soufiya — captured Wednesday by the extremists, the officials added, speaking on condition of anonymity because they were not allowed to talk to the media.

They described Ramadi as a ghost town with empty streets and closed shops after most of the residents had deserted it.

In its local, English-language radio bulletin on the al-Bayan station, the Islamic State group claimed to have complete control since Wednesday of at least six areas and most of a seventh area to the east of Ramadi, according to the SITE Intelligence Group, a U.S. group that monitors militant websites.

Ramadi and the city of Fallujah to the east, roughly half-way on the road to Baghdad, were major al-Qaida strongholds during the eight-year U.S.-led invasion, and fighting in Anbar was especially costly for Americans troops. Many of the militants were eventually forced to flee Iraq or go into hiding in the latter years.

In January 2014, Fallujah was the first major Iraqi city seized by the Islamic State group.

On a visit to Washington, Iraqi Prime Minister Haider al-Abadi on Wednesday made no mention of the events in Ramadi, speaking instead optimistically about gaining Sunni tribal fighter participation in the government's battle against the Islamic State group and saying that about 5,000 tribal fighters in Anbar had signed up and received light weapons.

The ISIS militants' al-Bayan radio station also reported that an attempt by Iraqi troops to advance on the Beiji oil refinery in Salahuddin province, about 115 miles north of Baghdad, was pushed back and that fighters "positioned themselves in multiple parts of the refinery after taking control of most of it," according to SITE.

Iraqi officials could not immediately be reached for comment on the fighting around Beiji. On Monday, Oil Minister Adel Abdul-Mahdi said that Iraqi forces, backed by U.S.-led coalition airstrikes, had repelled an IS attack on Beiji over the weekend.

Meanwhile, a senior U.S. military official told The Associated Press that there were no plans to evacuate U.S. troops from the Ain al-Asad air base, about 68 miles west of Ramadi — and stressed that the current fighting around Ramadi had no impact on the situation on the base or Americans there. He spoke on condition of anonymity because he was not authorized to talk to the media.

Since January, hundreds of U.S. forces have been training Iraqi troops at the base. An attack on the base by a suicide bomber in February was repelled.