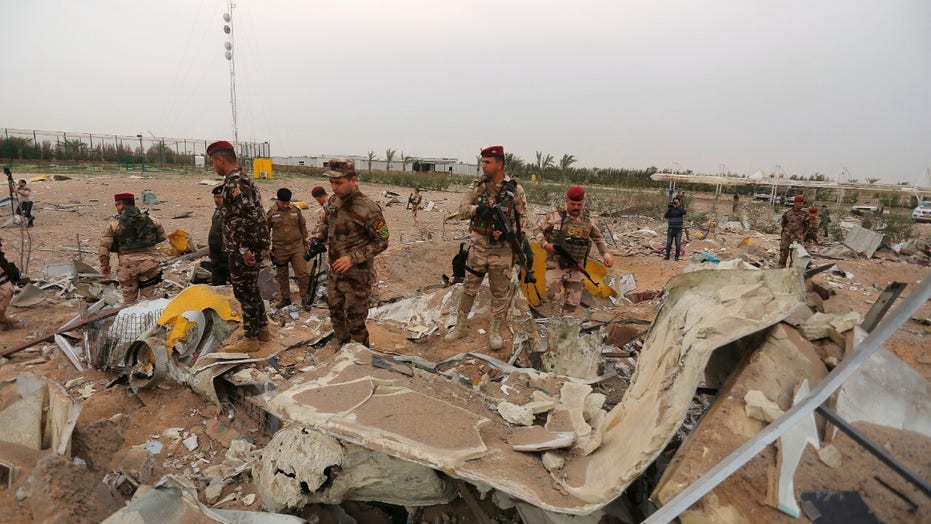 Dozens of rockets slammed into an Iraqi base north of Baghdad Saturday wounding three American and two Iraqi troops.

The Pentagon said later Saturday that two out of the three American troops wounded in the rocket attack in Iraq were "seriously" wounded.

"Last night, there was a Katyusha rocket attack on U.S., coalition and Iraqi forces at Camp Taji. We had three U.S. service members who were injured. Two seriously who are being treated at the military hospital at the Baghdad Airport base," said Assistant to the Secretary of Defense for Public Affairs Jonathan R. Hoffman. "There were additional injuries to our Iraqi partners."

It’s the same base where two Americans and a British Army medic were killed in a rocket attack Wednesday prompting U.S. airstrikes on Iranian-backed forces blamed for the attack.

A U.S. military spokesman says at least 25 rockets hit Camp Taji Saturday in the brazen attack that occurred in broad daylight, which is rare.

On Friday, the head of U.S. forces in the Middle East, Gen. Kenneth “Frank” McKenzie, said Kata’ib Hezbollah was responsible for the attack Wednesday, as well as 11 other attacks on U.S. forces in Iraq over the past six months.

Wednesday’s attack was the most deadly for U.S. troops since late December when an American interpreter was killed at a base in northern Iraq.  U.S. airstrikes killed dozens of Iranian-backed militants days later prompting an angry mob to attempt to storm the U.S. embassy in Baghdad.

Iran responded by launching over a dozen ballistic missiles at bases in Iraq housing U.S. troops.