Iranian president threatens to enrich uranium to 'any amount we want'

Iran’s president Hassan Rouhani warned European nations Wednesday that Tehran will "take the next step" in increasing its uranium enrichment closer to weapons-grade levels this coming Sunday if they do not offer a new deal by then, adding that they will increase it to "any amount that we want".

"Our advice to Europe and the United States is to go back to logic and to the negotiating table. Go back to understanding, to respecting the law and resolutions of the U.N. Security Council. Under those conditions, all of us can abide by the nuclear deal."

Iran's nuclear deal currently bars it from enriching uranium above 3.67%, which is enough for nuclear power plants but far below the 90% needed for weapons.

This week, Iran reportedly breached that low-enriched uranium stockpile limitation. Under terms of the multinational 2015 nuke deal, Iran can keep a stockpile of no more than 660 pounds of low-enriched uranium. The country originally pledged to stay within those limits if Britain, France, Germany and the rest of the European Union followed through with plans to provide Iran access to international banking systems. 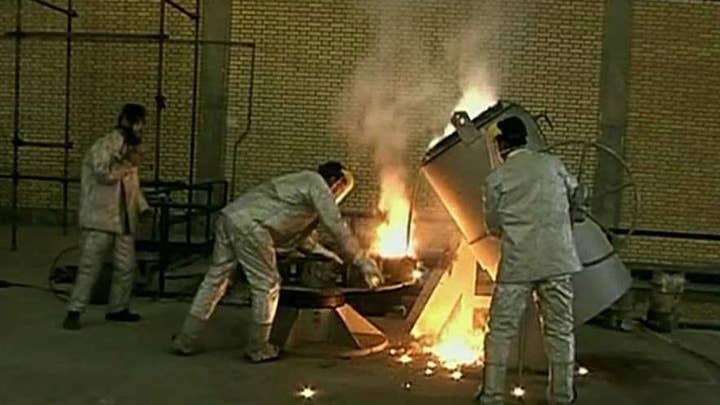 The 2015 deal has been unraveling since the U.S. withdrew its support in 2018. The original deal saw sanctions on Iran lifted in exchange for limits on its nuclear program, but President Trump restored crippling sanctions against Iran upon pulling out of the accord, weakening the agreement altogether.

NEWT GINGRICH SAYS IRAN IS 'VERY CLOSE TO BREAKING' UNDER TOUGH SANCTIONS: 'THIS IS A VERY SHAKY REGIME'

President Trump claimed the deal, which was agreed upon during President Obama’s time in office, only put weak limits on the regime's nuclear activity and still would allow Iran to pursue a nuclear weapon once key parts of the agreement lapse.

Former President Obama released a statement at the time, arguing the nuclear deal “is working” and “has significantly rolled back Iran’s nuclear program,” saying that’s why Trump’s announcement “is so misguided.”