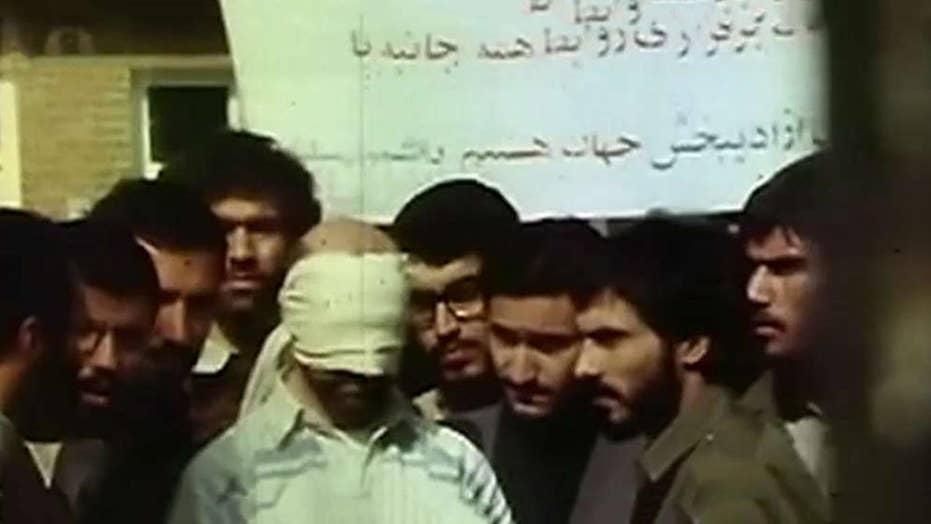 40 years after the Iranian hostage crisis, the students are now in charge.

Iran on Monday marked its defiance of the United States both new and old, as the Islamic Republic brazenly announced new violations of the 2015 nuke deal while Islamist demonstrators shouted "Death to America" and likened the U.S. to a "poisonous scorpion" during an event commemorating the 40th anniversary of revolutionaries seizing the U.S. Embassy in Tehran.

The rogue nation says it now operates 60 advanced centrifuges, twice as many as allowed by the 2015 accord, and is experimenting with a prototype designed to be 50 times faster than what's allowed by the nuke deal, an increasingly irrelevant agreement between Iran and numerous world powers that the U.S. has exited and Iran has repeatedly ignored. The announcement by Ali Akbar Salehi, the head of Iran's Atomic Energy Organization, came ahead of an expected statement detailing further breaches of the accord.

Experts have previously estimated Iran could produce enough material to build a nuclear weapon in about a one-year period; however, the advanced centrifuges could speed up that assessment.

In the four years since agreeing to the nuke deal, which was brokered by the Obama administration, Iran has already flaunted its disregard of stockpile and enrichment limitations, all the while hinting to European countries that increased economic aid and additional sanctions relief could persuade leaders to agree to a new deal or come back into compliance with the current one.

Iran's latest breach of the agreement comes as anti-U.S. protesters shouted "Death to America" and gathered near the location of the former U.S. Embassy in downtown Tehran to mark four decades since the 1979 takeover of the building that resulted in a 444-day hostage crisis. State television aired footage of celebrations in other cities across the country and Gen. Abdolrahim Mousavi, the commander of the Iranian Army, railed against the U.S. in a speech at the Tehran rally.

"Our fight with America is over our independence, over not submitting to bullying, over values, beliefs and our religion,” Mousavi said, according to Reuters. “[Americans] will continue their hostilities, like the proverbial poisonous scorpion whose nature it is to sting and cannot be stopped unless it is crushed."

He added: "Thanks to God, today the revolution's seedlings have evolved into a fruitful and huge tree that its shadow has covered the entire" Middle East.

However, elsewhere in the region, demonstrations were not as decidedly pro-Tehran.

Iran's regional allies in Iraq and Lebanon faced widespread protests, with the Iranian Consulate in Karbala, Iraq, a holy city for Shiites, as the site of a mob attack overnight in which three protesters were killed and 19 others wounded, along with seven policemen, Iraqi officials said.

President Trump retweeted posts by Saudi-linked media showing the chaos outside the consulate. The violence comes after the hard-line Keyhan newspaper in Iran reiterated a call for demonstrators to seize U.S. and Saudi diplomatic posts in Iraq in response to the unrest.

The latest events in Iran follow a tense summer of mysterious attacks on oil tankers and Saudi oil facilities that U.S. authorities said bore Iranian fingerprints. Tehran denied the allegation, though it did seize oil tankers and shot down a U.S. military surveillance drone.