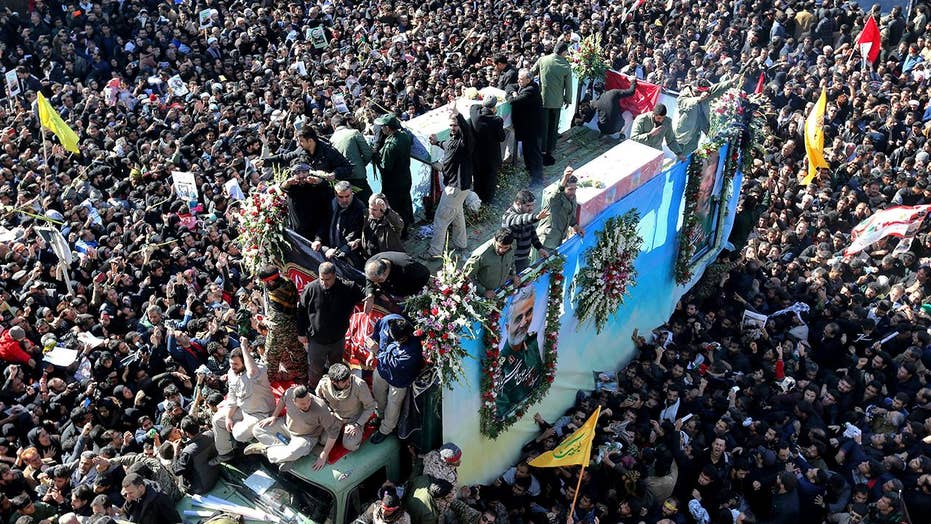 Deadly stampede at Soleimani funeral results in at least 35 killed

At least 56 Iranians were crushed to death Tuesday in a stampede that erupted during the funeral for Qassem Soleimani, the general killed last week in a U.S. airstrike, the country’s state media is reporting.

The gory episode in Soleimani's hometown of Kerman, which also reportedly left more than 200 injured, came as the U.S. Maritime Administration is warning ships across the Middle East to be on alert for possible retaliatory attacks from Iran.

“Unfortunately as a result of the stampede, some of our compatriots have been injured and some have been killed during the funeral processions," Pirhossein Koulivand, the head of Iran’s emergency medical services, told state media.

Coffins of Gen. Qassem Soleimani and others who were killed in Iraq by a U.S. drone strike, are carried on a truck surrounded by mourners during a funeral procession, in the city of Kerman, Iran, on Tuesday. (AP/Tasnim News Agency)

The cause of the stampede was not immediately clear. Videos posted online showed people lying lifeless on a road and others shouting and trying to help them — and the incident has now delayed Soleimani’s funeral services.

It’s not the first time that chaos has erupted at a funeral for an influential Iranian figure.

In 1989, a funeral procession in Tehran for Ayatollah Ruhollah Khomeini was interrupted when his half-naked remains toppled out of an open coffin live on state television. Mourners had blocked the path of a truck carrying the deceased leader of the Iranian revolution and tore at his burial shroud, knocking his body to the ground. That led the broadcast to be cut short and his body airlifted by military helicopter away from the crowd until his remains could be rewrapped.

In this frame grab from video posted online, people try to resuscitate victims of a deadly stampede at a funeral procession for Qassem Soleimani. (AP)

Soleimani, before he was killed last week, was the head of the Iran Revolutionary Guards’ elite Quds Force. The U.S. had blamed him for the killing of American troops in Iraq and accused him of plotting new attacks just before his death Friday in a drone strike near Baghdad’s airport. Soleimani also led forces in Syria backing President Bashar Assad in a long war and served as the point man for Iranian proxies in countries like Iraq, Lebanon and Yemen.

DANIEL DAVIS: US SHOULD WITHDRAW FROM MIDDLE EAST WHILE THERE'S STILL TIME TO AVOID ANOTHER COSTLY WAR

Speaking in Kerman on Tuesday, Hossein Salami – the leader of Iran’s Revolutionary Guards – threatened to “set ablaze” places supported by the United States to avenge Soleimani’s death. His remarks were met with cries of “Death to Israel!” from a crowd of supporters, according to The Associated Press.

How do Iranians really feel about the death of Qassem Soleimani?

A separate procession Tuesday in Soleimani’s honor, in the capital of Tehran, is said to have drawn more than one million people.

It quoted Ali Shamkhani, the secretary of Iran’s Supreme National Security Council, as saying that even the weakest among them would be a “historic nightmare” for the U.S. But he declined to give any details.

“If the U.S. troops do not leave our region voluntarily and upright, we will do something to carry their bodies horizontally out," Shamkhani said.

The leader of Iran's Revolutionary Guard threatened on Tuesday to "set ablaze" places supported by the United States over the killing of Gen. Qassem Soleimani last week. (AP/Tasnim News Agency)

The fiery rhetoric from Iran has prompted the U.S. Maritime Administration to issue a warning to ships across the Middle East.

“The Iranian response to this action, if any, is unknown, but there remains the possibility of Iranian action against U.S. maritime interests in the region,” it said.

Oil tankers were targeted in mine attacks last year the U.S. blamed on Iran. Tehran has denied being responsible, though it did seize oil tankers around the crucial Strait of Hormuz, the narrow mouth of the Persian Gulf through which 20 percent of the world’s crude oil travels.

The U.S. Navy's Bahrain-based 5th Fleet says it will work with shippers in the region to minimize any possible threat.

The killing of Iranian General Qassem Soleimani began with a series of attacks on American forces.

The 5th Fleet “has and will continue to provide advice to merchant shipping as appropriate regarding recommended security precautions in light of the heightened tensions and threats in the region,” 5th Fleet spokesman Cmdr. Joshua Frey told The Associated Press.

Meanwhile, Iranian Gen. Alireza Tabgsiri, the chief of the Guard’s navy, issued his own warning.

“Our message to the enemies is to leave the region," Tabgsiri said, according to the ISNA news agency. The Guard routinely has tense encounters with the U.S. Navy in the Persian Gulf.

Soleimani will ultimately be laid to rest between the graves of Enayatollah Talebizadeh and Mohammad Hossein Yousef Elahi, two former Guard comrades. The two died in Operation Dawn 8 in Iran's 1980s war with Iraq in which Soleimani also took part, a 1986 amphibious assault that cut Iraq off from the Persian Gulf and led to the end of the bloody war that killed 1 million people.