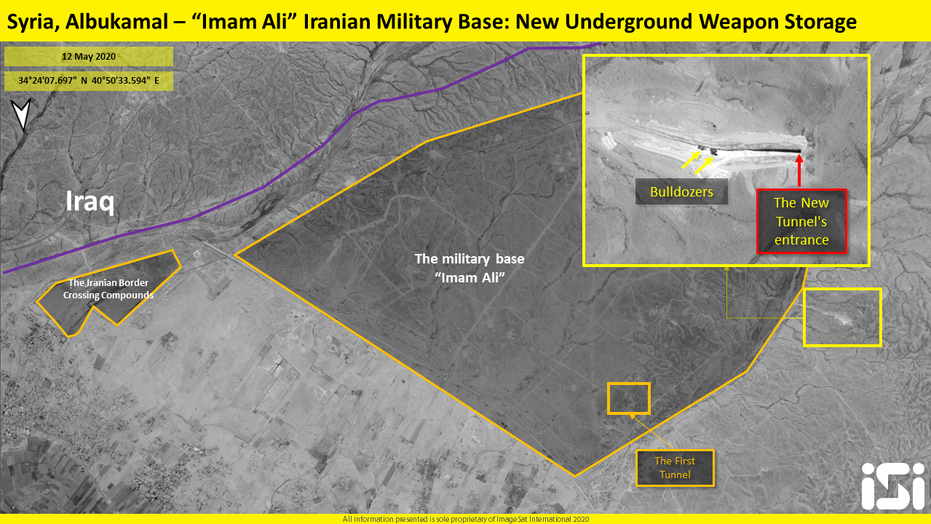 JERUSALEM - Iran is building a new tunnel at the Imam Ali military base in Eastern Syria capable of storing advanced weapons systems, according to satellite images and analysis obtained by Fox News.

Images captured on May 12 show bulldozers at the entrance of the structure that is estimated to be around 15 feet wide.

Satellite shots from April 1 show an excavator and bulldozers near where the new construction took place.

Intelligence analysis conducted by Image Sat International (ISI), a civilian satellite company, indicates the tunnel is fit to be used for the storage of vehicles carrying advanced weapons systems. This conclusion was drawn from looking at similar tunnels that were dug over the past nine months on the same complex. One such tunnel, two miles away, was bombed in March, forcing the Iranians to abruptly stop construction.

Fox News was first to report the existence of this Iranian military base in September 2019, citing multiple Western intelligence sources. The compound, that sits along the Iraq/Syria border, was targeted with airstrikes less than a week later.

The Israeli military has struck numerous Iranian-linked sites in Syria over the past two years, but has not acknowledged recent attacks against the Imam Ali base.

Although reports this month say Israeli defense officials believe Iran is reducing its footprint in Syria, analysts at ISI say the construction of the new tunnel shows Iran plans to continue operating in this area.