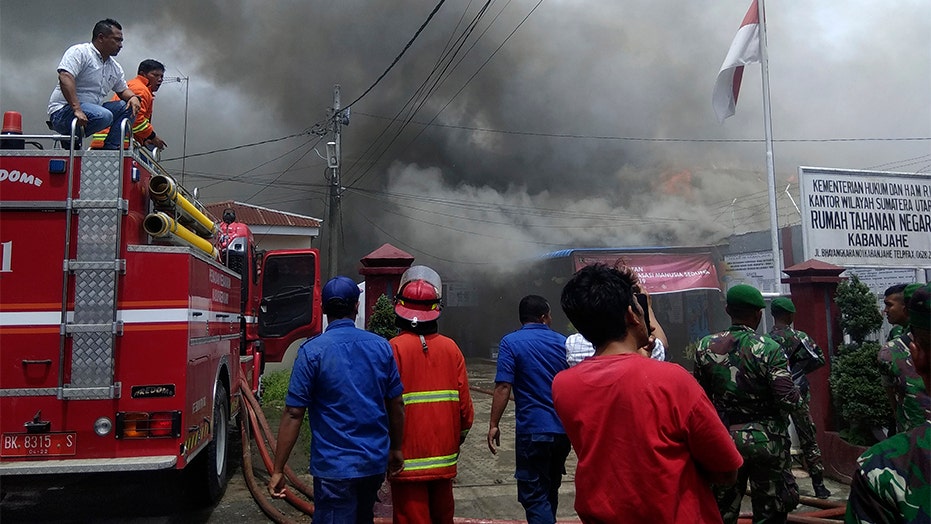 Indonesian inmates protesting conditions at an overcrowded prison on Sumatra Island set fire to the facility Wednesday, prompting officials to deploy around 500 police and soldiers in response.

The riot at Kabanjahe prison erupted after those held there became upset with the treatment of four inmates who were placed in isolation after being caught taking drugs into their cell, Sri Puguh Budi Utami, director-general of corrections at the Justice and Human Rights Ministry, told the Associated Press.

The prison is designed to house 193 inmates but now has more than 400 -- and is only staffed by eight guards.

Other inmates, mostly arrested for drug offenses, joined the protest and it turned violent, but there were no reports of deaths, Utami said. A full investigation of the riot is underway.

Television video showed prisoners in an open field under heavy guard by soldiers while police removed others from the prison compound. Black smoke billowed from a building and burned office equipment and documents were scattered around the prison.

Local police chief Benny Hutajulu said eight fire trucks were mobilized to extinguish the fire and about 500 police and soldiers were deployed around the prison to prevent inmates from escaping.

Jailbreaks and riots are common in Indonesia, where overcrowding has become a problem in prisons that are struggling with poor funding and large numbers of people arrested in a war on illegal drugs.