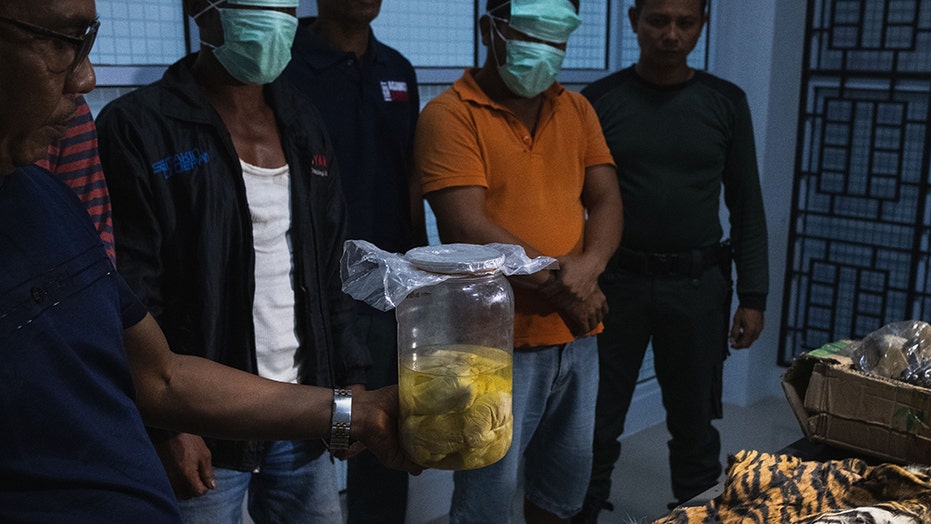 Five suspected poachers were arrested over the weekend in Indonesia after the skin of a protected Sumatran tiger and four fetuses preserved in jars were discovered, according to officials.

Eduward Hutapea, a local Environment and Forestry Law Enforcement chief, said the five suspects – four men and a woman – were arrested on Saturday by a team of police and forestry ministry officers in separate raids in two villages in Riau province's Pelalawan district.

The arrests came after police had received a tip from villagers about the group's alleged illegal activities.

In addition to a piece of an adult tiger's skin, police confiscated four preserved fetuses.

A skin and four Sumatran tiger fetuses secured from by officers from poachers in Indonesia over the weekend. (Photo by Afrianto Silalahi/NurPhoto via Getty Images)

Hutapea told the Associated Press that two of those arrested are believed to have been acting as sellers. Authorities are now investigating to see whether it is part of an illegal wildlife animal trading syndicate.

It wasn't clear if the fetuses were taken from the adult tiger whose skin was recovered.

Sumatran tigers are the most critically endangered tiger subspecies on the International Union for Conservation of Nature's red list. About 400 remain, down from 1,000 in the 1970s, because of forest destruction and poaching.

The World Wildlife Fund has said that "accelerating deforestation and rampant poaching" in Indonesia may lead to the tigers' extinction in the future.

"In Indonesia, anyone caught hunting tigers could face jail time and steep fines," the organization notes. "But despite increased efforts in tiger conservation – including strengthening law enforcement and antipoaching capacity – a substantial market remains in Sumatra and other parts of Asia for tiger parts and products"