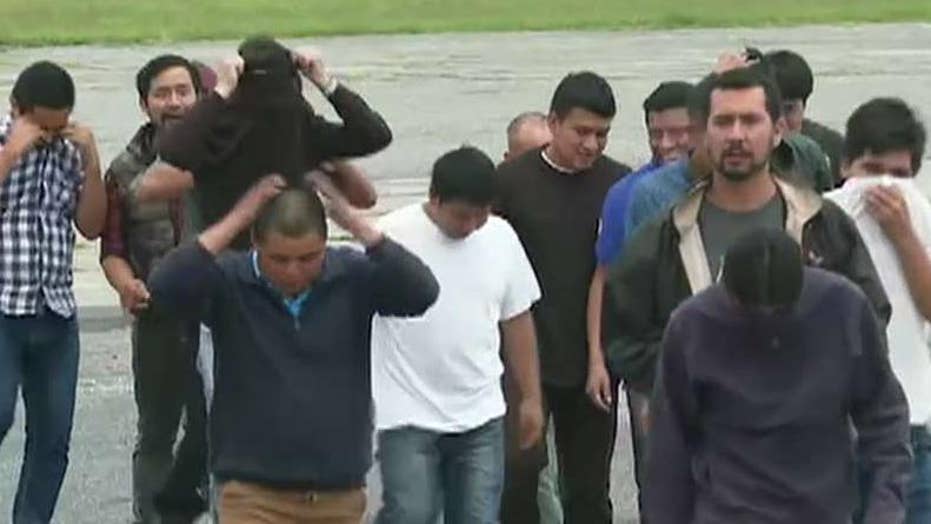 Mexico has deployed their national guard to the Guatemala border to stop migrants amid pressure from U.S.; William La Jeunesse reports.

TECUN UMAN, Guatemala -- President Trump’s effort to reduce illegal immigration is showing results far south of the border, with Mexico and Guatemala stepping up efforts to deter and detain the surge of migrants from Central America.

Mexico claims to have deployed 791 new immigration agents and promises some 6,000 National Guard to its southern border by Tuesday. Some soldiers were clearly visible Sunday on the Mexican side of the Suchiate River, giving migrants on the south shore in Guatemala second thoughts about crossing.

“They are waiting for nightfall,” said Abelino Reyes Chavez, a pedal taxi driver who works at the busy boat landing in Tecun Uman, Guatemala. “They show up around 7. But are we worried the Mexicans crackdown will hurt business? Yes, if they close the border my wages will go down.”

Increasingly, immigration from Guatemala is coming from the rural areas and Western Highlands, an area devastated by droughts, floods and falling coffee prices.  (Fox News)

Shelters here in Tecun Uman are full. In a local park, we found 33-year-old Honduran immigrant Jose Acosta. He snuck into the U.S. eight months ago in Eagle Pass, Texas, but was apprehended weeks later in Houston on his way to a job in North Carolina. He is here waiting to cross, but fears getting stopped and deported by the Mexicans.

“They tell me to cross now but I am afraid because I don’t want to be returned to my country,” he said.

Previously, Mexican police showed little interest in stopping migrants headed to the U.S. Now, however, not only are Mexican police and soldiers visible, Sunday morning they stopped some rafts, demanding to see Mexican border crossing cards. But by the afternoon, they were gone.

“There will be a dog and pony show for the media,” said a former State Department deputy director responsible for Mexico who asked to remain anonymous because he still does business in Latin America. “Trump is looking for numbers and the Mexicans will produce them.  I think it will have an impact.”

Journalist Enrique Naveda agrees, but not in a good way.

“It will not stop migration but it will have an impact,” said Naveda. “It will keep many more people in Guatemala than are escaping right now and Guatemala is not ready for that. “

Mexico claims to have deployed 791 new immigration agents and promises some 6,000 National Guard to its southern border by Tuesday. Some soldiers were clearly visible Sunday on the Mexican side of the Suchiate River, giving migrants on the south shore in Guatemala second thoughts about crossing. (Fox News)

Juan Carlos Zapata, who heads a Guatemala think tank and aid group trying to attract direct foreign investment, said he may not agree with the Trump strategy, especially when it comes to cutting aid, but admits it is prompting Central American politicians to confront their own problems, not export them to the U.S.

“It is forcing politicians to focus on those issues and to start talking about policies that can actually increase foreign investment to create job opportunities in our country,” he said.

Increasingly, immigration from Guatemala is coming from the rural areas and Western Highlands, an area devastated by droughts, floods and falling coffee prices. The police chief in a small town with a huge monument to migrants claims up to 40 percent of the young people left for the U.S.  Crime there is almost non-existent, and countrywide violent crime is down – homicides by half. But in cities, businessmen complain about extortion.

The average age here 21, the youngest in the hemisphere.  The numbers are similar to the 1990s, when Mexican men flooded the U.S. border looking for work.

In Guatemala, 200,000 enter the job market annually for 50,000 available jobs. Wages are as little as $15 a day in the city, $8 in rural areas. A poll here by a United Nations agency found 91 percent left for economic reason, 5 percent to reunite with family, less than 2 percent cited violence.

“Yes, I have had family members who have left because there are no jobs,” said teenager Christian Sapos outside the Catholic Church in Salcaja.

Dozens of rafts cross the Suchiate River carrying locals mostly shopping in Mexico for food, beer and appliances. They take the rafts to avoid tariffs on the bridge and customs officials. (Fox News)

The flat area near the Tecun Uman-Cuidad Hildago Bridge is the busiest crossing point between Central America and Mexico. It is accessible to the media and easy to patrol.

However, the 500-mile border here is anything but. Further east, the mountains are taller, the forests are thicker and there are fewer roads than anywhere along the U.S. border and nearly impossible to police. The area is a superhighway of migrants headed to the U.S. – not just from Guatemala but Honduras, El Salvador, Cuba, Haiti and Central Africa.

Dozens of rafts cross the Suchiate River carrying locals mostly shopping in Mexico for food, beer and appliances. They take the rafts to avoid tariffs on the bridge and customs officials.

Mexico can no more seal its southern border than the U.S. can close its border with Mexico.

The president’s tariff threat to Mexico isn’t the only one in the region. He also promised to cut off foreign aid to Guatemala, the largest recipient of U.S. aid in the region – $256 million from 2013 to 2017. Many oppose cutting aid, saying it gives the U.S. a seat at the table and a right to be involved in regional policy decisions, even if it is widely agreed much of the money is skimmed off by U.S. non-government organizations in administration overhead or inflated prices.

Guatemala is now the No. 1 source of illegal immigrants in the U.S., with some 211,000 apprehended in the last eight months at the Mexican border. In response, the U.S. is deporting more than ever before. Three to four ICE flights a day bring home some 1,500 Guatemalans each week to the capitol city. Processed and released, some promise to stop, others vow to try again.

“I did it three times already, and three times I got caught,” said Noe Santos who worked for $12 an hour at a restaurant in Atlanta. “I have $3, I have to work.”

Dressed in a blue polo shirt, Pablo Lopez said he is dropping his American dream.

Pascual  Pedro Artola said, “I will work here a few months and go back.” A young man in a red and black plaid shirt said, “Yea, I am going back.”

A geographical choke point, Guatemala agreed last week to deploy to up to 80 U.S. immigration agents to improve its border security and identify criminals.

“The end country is the U.S, but the transit countries, we get the same kind of problems,” said Interior Minister Enrique Degenhart.

Guatemala is considering a safe third country agreement – first in Latin America and something Mexico has refused to do – requiring Honduran and Salvadoran migrants to file for asylum here – not the U.S.

“I can confirm Guatemala is going to be a country that is going to support the U.S. with regard to closing that loophole,” he told Fox News.

Late Monday, Mexican President Andres Manuel Lopez Obrador said he would be meeting Thursday with the Salvadoran president in Tapachula Mexico. One topic on the table: immigration.