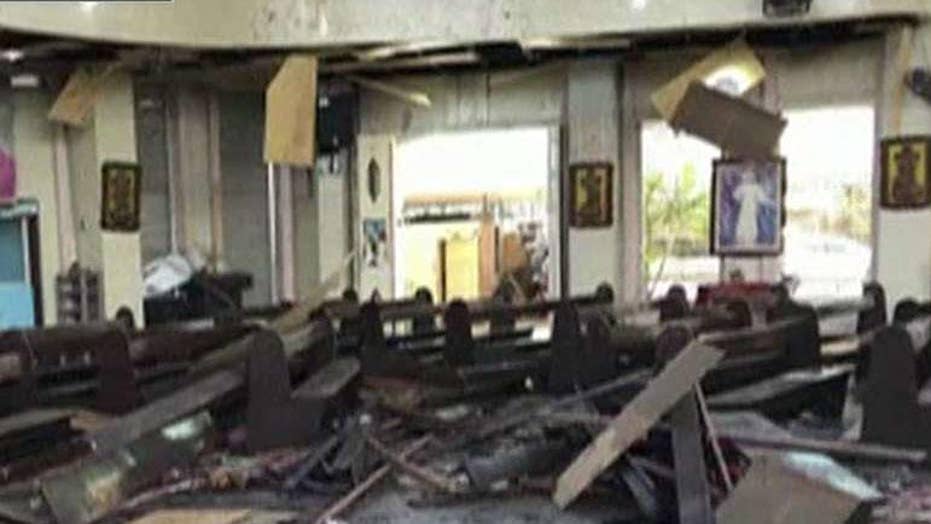 At least 20 dead, 70 injured following bomb attack inside a church in the Philippines

No groups have claimed responsibility so far.

An Indonesian husband and wife who had taken part in a government-sponsored deradicalization program are believed to be the masterminds of a suicide bombing of a Roman Catholic cathedral in the southern Philippines earlier this year that killed more than 20 people.

Police said Tuesday they believe Rullie Rian Zeke and his wife, Ulfah Handayani Saleh, detonated two bombs minutes inside the Cathedral of Our Lady of Mount Carmel in Jolu, Suly province, during Sunday service on January 27.

Twenty people were killed and 102 others injured. The Islamic State claimed responsibility for the attack.

In this Jan. 27, 2019, file photo provided by WESMINCOM Armed Forces of the Philippines, a soldier views the site inside a Roman Catholic cathedral in Jolo, the capital of Sulu province in the southern Philippines, after two bombs exploded. Police said Tuesday, July 23, 2019, they believe an Indonesian husband and wife carried out the suicide bombing of a cathedral in the southern Philippines in January that killed more than 20 people. (WESMINCOM Armed Forces of the Philippines via AP)

Indonesia’s National Police spokesman Dedi Prasetyo said Tuesday they identified Zeke and Saleh as the perpetrators of the attack after they arrested an Islamic militant in East Kalimantan last month. He said the militant, identified only as Yoga, confessed that he’d recruited the couple for the Philippine bombing.

Yoga reportedly told police that he and the couple he recruited for the bombing were part of the Jemaah Anshorut Daulah, a banned Islamic extremist organization in Indonesia that allies itself with ISIS.

The couple’s alleged role in the bombing highlights links between militants across Southeast Asia. Authorities in the region are concerned of Indonesian, Malaysian and Philippine citizens who joined ISIS in Syria and Iraq returning home and carrying out attacks.

Prasetyo said Zeke and Saleh had previously failed in an attempt to reach Syria with their children, and after returning to Indonesia underwent a government deradicalization program before being released.

Some Indonesian militants had tried to reach Afghanistan after the defeat of ISIS in Syria and Iraq, he added, including a man arrested in a Jakarta satellite city who planned a suicide bombing during protests in May against the results of Indonesia’s presidential election.