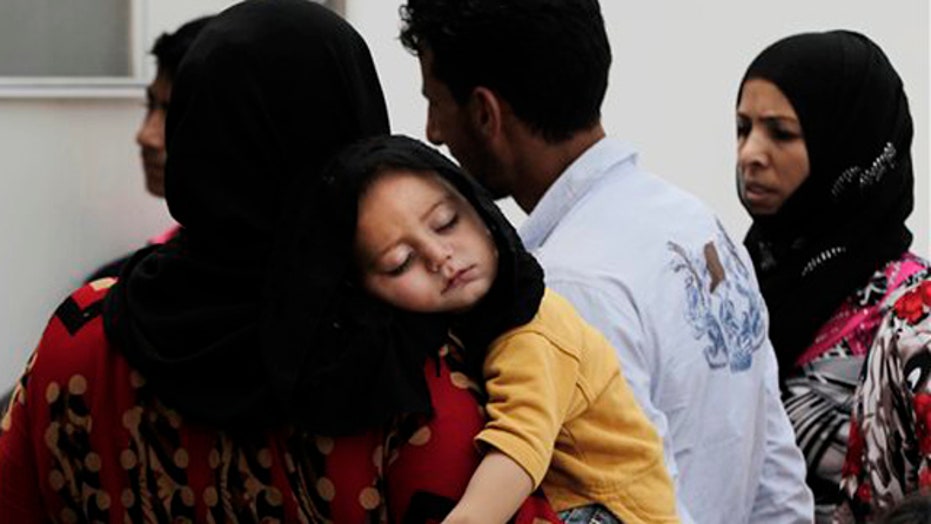 Hundreds of frustrated refugees broke through police lines late Monday along Hungary’s southern border with Serbia and began marching north, as the country’s prime minister slammed efforts by E.U. leaders to make more members of the 28-member bloc take in the asylum-seekers from the Middle East, Africa, and Asia.

Viktor Orban told a meeting of Hungarian diplomats earlier on Monday their country was the "black sheep" of Europe's worst refugee crisis since the end of World War II.

Orban also said the E.U.'s quotas make no sense in a system where the free movement of people would make it impossible to enforce.

"How is this going to work?" Orban asked rhetorically. "Has anyone thought this through?"

Orban spoke hours after Austrian Chancellor Werner Faymann told reporters that his country would begin phasing out emergency measures that helped thousands of refugees make their way to Germany over the weekend. Faymann said he had made the decision following what he called "intensive talks" with Orban and German Chancellor Angela Merkel.

"We have always said this is an emergency situation in which we must act quickly and humanely," said Faymann. "We have helped more than 12,000 people in an acute situation. Now we have to move step-by-step away from emergency measures towards normality, in conformity with the law and dignity." Faymann did not announce any timetable for when the measures might be removed.

Crowds of refugees on Monday who grew tired of waiting for buses at Hungary's first migrant holding center near the border village of Roszke tore down through police tape and marched through rows of police trying to block them.

Hungary is planning to “seal off” its border with Serbia in the next coming days, which is expected to stop any refugees from crossing over, Sky News reports.

But there are fears the fence being built along the border could create dangerous bottlenecks in Serbia as thousands of people continue to stream north.

Orban however has defended the project, saying that Hungary is "protecting Europe according to European rules that say borders can be crossed only in certain areas in a controlled way and after registration,” Sky News reports. On Sunday, Israeli Prime Minister Benjamin Netanyahu announced that a fence would be constructed along the country’s border with Jordan to prevent Syrian refugees arriving.

The crisis has exposed deep divisions in the E.U. over how to handle the situation. Germany, which was expected to receive an estimated 800,000 refugees this year, said it was putting no limit on the number displaced people it would accept. French President Francois Hollande said Monday that his country would accept 24,000 refugees in an effort to take some of the burden off his close ally, Merkel.

Early Monday, the German government said it will spend 6 billion euros ($6.6 billion) next year to support the hundreds of thousands of migrants coming to Germany, as well as to introduce legal measures making it easier to deport-asylum seekers from countries considered "secure states" like Montenegro, Kosovo and Albania. Asylum-seekers will also get less cash in the future and more non-cash benefits.

"We have a moving, in some parts breathtaking, weekend behind us," Merkel told reporters, but the German leader stressed that Europe's biggest economy isn't willing to shoulder the whole refugee burden alone.

"Germany is a country willing to take people in," Merkel said, "but refugees can be received in all countries of the European Union in such a way that they can find refuge from civil war and from persecution."

Some countries, like the United Kingdom, have promised to take in thousands more refugees than they had previously said they would accept. But E.U. foreign ministers failed to agree on practical steps to solve the crisis during a meeting in Luxembourg on Saturday, and despite allowing thousands to travel to Austria and Germany, Hungary has provided an otherwise lukewarm welcome, with thousands of refugees being sent to camps.

On Monday, Austrian police spokesman Helmut Marban told the Associated Press that no refugees had arrived at the Nickelsdorf border point since before midnight, when 260 people crossed into Austria from Hungary and left shortly afterward by train to Vienna.

Beyond the Red Cross tent set up near the crossing and the stores of food, empty cots set up in a parking lot, hygiene articles and other goods stacked up for any new arrivals, there was little to indicate Monday morning that the border had served over the weekend for the dramatic influx of Syrians, Iraqis, Afghans and others fleeing war or persecution or simply seeking a better life in Germany, Austria and other prosperous E.U. countries.

Refugees from the Middle East, Africa, and Asia who often have spent weeks traveling through Turkey, Greece and the Balkans to reach Hungary, a popular back door into the European Union, found to their surprise they were permitted Sunday to buy tickets to take them all the way into Austria and Germany. Hungary had insisted last week they would no longer be allowed to do this.

"No check, no problem," said Reza Wafai, a 19-year-old from Bamiyan, Afghanistan, who said he hoped to join relatives in Dortmund, Germany. He displayed his just-purchased ticket to Vienna costing 9,135 forints ($32.50). He was traveling without a passport, carrying only a black-and-white Hungarian asylum seeker ID.

Hungarian government spokesman Zoltan Kovacs told The Associated Press that Hungary had decided to drop visa checks on train ticket customers, a measure introduced only Tuesday, because of the sudden drop in refugee numbers made possible by Germany and Austria's breakthrough decision to take thousands of asylum seekers stuck in Hungary. The country used 104 buses to clear Budapest's central Keleti train station and Hungary's major motorway of more than 4,000 refugees and deliver them to the border.

Sunday's free movement for refugees on trains represented an effort "to return to normality, whatever that is," Kovacs said.

Division also remains on how to tackle the root cause of the mass migration from Syria, with reports that the British government is seeking to persuade opposition Members of Parliament to back airstrikes in Syria. Meanwhile, in Paris, France's Hollande said that France would send reconnaissance planes over Syria beginning Tuesday, saying the flights would help inform airstrikes against the Islamic State group.