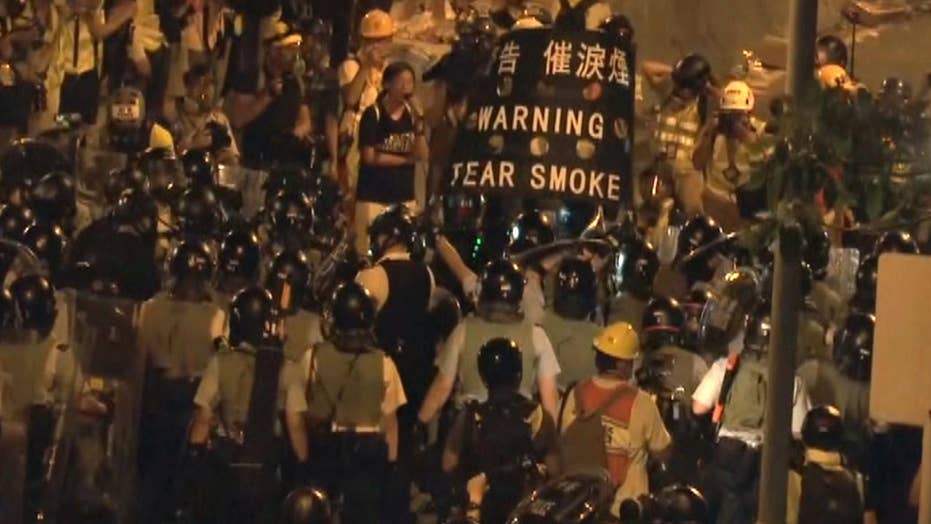 A group of protesters smashed a window and stormed Hong Kong's legislature building Monday amid another round of mass demonstrations in the city, where a commemoration of the 22nd anniversary of the orderly return to Chinese rule was replaced by tumultuous scenes of civil disobedience, destruction and the deployment of tear gas.

The crowd, comprised of mostly young protesters, could be seen on video using a cargo cart and large poles as battering rams against the glass panel of the legislature building. The demonstrators then tore down part of a glass and metal exterior wall of the government building, carrying away the long strips of metal framework.

Protesters gather outside the Legislative Council as they stage a rally in Hong Kong, Monday, July 1, 2019.

Officers were able to eventually commandeer the cart, using riot shields and deploying pepper spray to push back the hundreds of demonstrators gathered around the building.

Hundreds of protesters later surged into the building around 9 p.m. in a situation described as "chaos" as people funneled inside from two places that had been breached, according to the South China Morning Post.

Hong Kong Cable TV showed the helmeted protesters walk through a security checkpoint and continue to smash through metal doors to try to go deeper into the building.

While inside, the group smashed up portraits of legislative leaders, doors, and walls as about a thousand gathered around the building in the heart of the city's financial district, Reuters reported.

A protester steps on a damaged portrait of former legislative leader lie on the ground after protesters broke into the Legislative Council building in Hong Kong, Monday, July 1, 2019. (AP Photo/Vincent Yu)

The protestors then took over the legislative chamber, spraying paint slogans on the wall and over the territory's emblem.

A protester shouts next to a defaced Hong Kong emblem and a banner reads "No thug, only tyranny" after they broke into the Legislative Council building in Hong Kong, Monday, July 1, 2019. (AP Photo/Kin Cheung)

The council, the mini-parliament, issued a red alert, ordering the protesters to leave immediately.

Protesters raise a banner reads "Beyond redemption, no retreat" in front of a defaced Hong Kong logo after break in at the Legislative Chamber to protest against the extradition bill in Hong Kong, Monday, July 1, 2019. (AP Photo/Vincent Yu)

Hours after the group stormed the building, Hong Kong police announced on Facebook they were planning to clear the area in a short period of time, and warned they would use appropriate force if they encounter resistance. Authorities could be seen on video firing tear gas as protesters ran for cover and advancing on the crowd.

Ongoing protests continue against a proposed law that could allow people to be extradited to mainland China; Greg Palkot reports from London

As the group tore through the legislature building, tens of thousands of others marched through the city demanding expanded democracy.

Hong Kong demonstrators are opposed to a government attempt to change extradition laws that would allow suspects to be sent to China to face trial. The proposed legislation, on which debate has been suspended indefinitely, increased fears of eroding freedoms in the territory, which Britain returned to China on July 1, 1997.

“I am afraid the march today will be the last protest for Hong Kong," demonstrator Harley Chuk Kit-ying told the SCMP. "If I still chose not to come, then I would regret for a lifetime."

A protester tries to break the glass to get into the Legislative Council in Hong Kong Monday, July 1, 2019. (Jeff Cheng/HK01 via AP)

The clashes at the government building forced Hong Kong's leader to watch the annual commemoration of the handover from inside the city's cavernous convention center instead of outside, according to Sky News.

In an address after a flag-raising ceremony marking the anniversary of the handover, Lam said the recent series of protests and two marches that attracted hundreds of thousands of participants have taught her she needs to listen better to youth and people in general.

Protesters in Hong Kong pushed barriers and dumpsters into the streets early Monday morning in an apparent bid to block access to a symbolically important ceremony marking the anniversary of the return of the former British colony to China. (AP Photo/Kin Cheung)

"This has made me fully realize that I, as a politician, have to remind myself all the time of the need to grasp public sentiments accurately," she told the gathering. Lam, who has come under withering criticism for trying to push the extradition legislation through, has pledged to be more responsive to public sentiment.

She insisted her government has good intentions, but said "I will learn the lesson and ensure that the government's future work will be closer and more responsive to the aspirations, sentiments and opinions of the community."

Protestors in Hong Kong, China have moved toward using a gorilla style mobile strategy to stay one step ahead of the police; Greg Palkot reports.

Security guards pushed pro-democracy lawmaker Helena Wong out of the room as she shouted at Lam to resign and withdraw the "evil" legislation. She later told reporters she was voicing the grievances and opinions of the protesters, who could not get into the event.

The mass march on Monday was the third demonstration in three weeks after the bill fueled fears that China is eroding Hong Kong's freedoms.

Jimmy Sham, a leader of the pro-democracy group that organized the march, told the crowd that Lam had not responded to their demands because she is not democratically elected. The leader of Hong Kong is chosen by a committee dominated by pro-China elites.

Protesters flood the streets as they take part in a rally Monday, July 1, 2019, in Hong Kong. (AP Photo/Kin Cheung)

"We know that Carrie Lam can be so arrogant," Sham said, rallying the crowd under a blazing sun before the start of the march at Victoria Park. "She is protected by our flawed system."

Besides the controversial legislature, protestors are also demanding an independent inquiry into police actions during a June 12 protest, when officers used tear gas and rubber bullets to disperse a demonstration that blocked the legislature on the day that debate on the bill had been scheduled to resume.

Police have claimed the use of force was justified, but since then have largely adopted softer tactics, even as protesters besieged police headquarters in recent days, pelting it with eggs and spray-painting slogans on its outer walls.