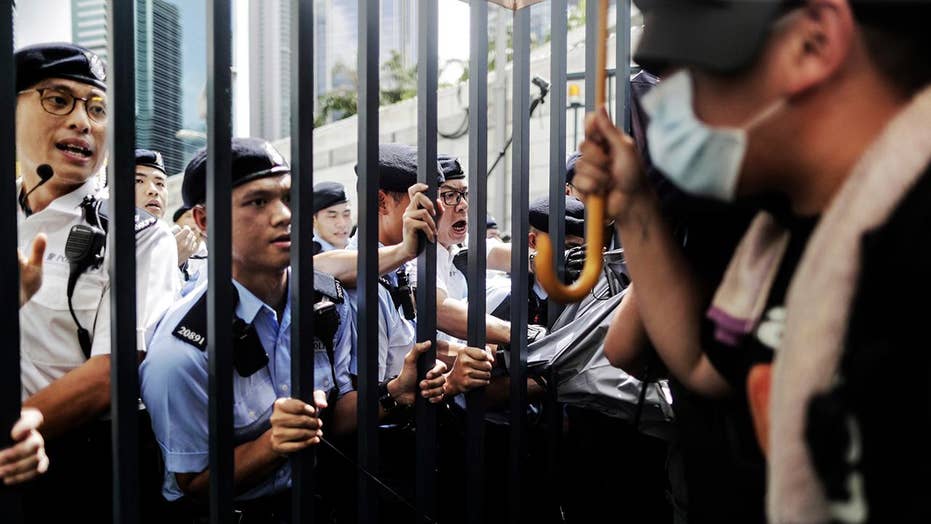 Hong Kong protesters in opposition to their legislation’s proceedings regarding an extradition bill demonstrated outside the Department of Justice’s headquarters Thursday to support judicial independence against China. Their leader has remained out of public sight for two weeks now.

“Withdraw the evil bill," protest leader Joshua Wong said to his crowd. "Release the protestors. There were no riots, only a tyrannical government."

During the demonstration, police attempted to push the crowd back onto the sidewalk before yielding and allowing them to occupy the road. Some protestors even directed traffic around the gathering.

Since issuing a televised apology to the Hong Kong public nearly two weeks ago, Hong Kong’s Chief Executive Carrie Lam hasn’t been spotted in public. Legislator Kwok Ka-ki of the Civic Party suggested she take a long-term leave of absence.

“To refuse to appear, to refuse to acknowledge a request and to refuse to make a decision is entirely irresponsible,” Kwok said on Radio Television Hong Kong. “[Lam’s non-appearance] will only hurt Hong Kong more.”

Riot police clear barricades blocked by protesters outside the police headquarters as thousands gathered to demand for an independent inquiry into a heavy-handed police crackdown at a protest earlier this month, in Hong Kong during the early hours of Thursday, June 27, 2019. Thousands of people joined Hong Kong's latest protest rally Wednesday night against legislation they fear would erode the city's freedoms, capping a daylong appeal to world leaders ahead of a G-20 summit this week that brings together the heads of China, the United States and other major nations. (AP Photo/Kin Cheung)

Millions of citizens took to the streets earlier this month after Lam attempted to pass an extradition bill which would allow criminal suspects in Hong Kong to be apprehended and extradited to mainland China for trial. Many fear this proposal would destroy Hong Kong’s judicial independence and civil liberties it was promised after its handover from British governance in 1997.

Thousands of people rallied Wednesday night to appeal to world leaders to take the issue to the global stage at this week’s G20 summit, bringing together officials from China, the United States as well as many others.

Beijing has strongly refused any dialogue of the issue at the summit, saying matters regarding Hong Kong are an internal Chinese affair.

“China has said it will not allow the G20 nations to discuss the Hong Kong issue at their summit, but we have to urge everyone to pay attention to this serious issue,” human-rights activist Chiu E-ling said. “We call on leaders at the G20 summit to actively express their opposition to Hong Kong’s amendment of the extradition bills.”